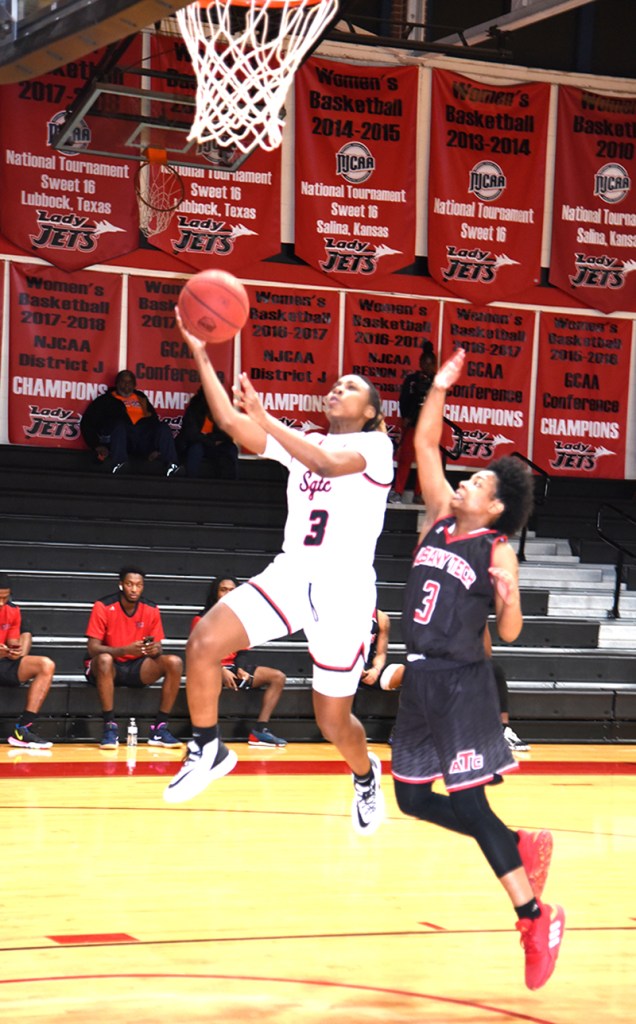 SGTC sophomore shooting guard Niya Goudeloc (3) was the top scorer for the Lady Jets in their 82-52 victory over Albany Tech. Photo by Su Ann Bird

The Jets, however, were not as fortunate. Despite having a four-point lead with 4:52 remaining on the clock, ATC held the Jets scoreless over the next few minutes and scored 11 unanswered points to take the 67-60 victory. The win lifted the second-ranked Titans to 6-1 conference record and a 13-7 overall record. With the loss, the Jets fell to 9-12 overall and 2-5 in the GCAA.

The Lady Jets may have played their best first half of the season as they pulled ahead 23-16 at the end of the first 10 minutes. They kept applying that pressure in the second quarter and scored another 30 points while holding ATC to only 10 points. That allowed the Lady Jets to pull ahead 53-26 at the half. SGTC scored another 29 points in the second half en route to an 82-52 victory.

Brice Paster (3) scored 11 points for the Jets and was the only South Georgia Tech player in double-figures in the loss to Albany Tech.
Photo by Su Ann Bird

The Lady Jets were led in scoring by Niya Goudelock, who had 14 points. Anna McKendree tossed in 13 points and Yasriyyah Wazeerud-Din added 12 points to close out the double-digit scoring for SGTC.

After the Lady Jets’ win, the Jets came out and allowed ATC to jump out to a 10-0 lead in the first four minutes. However, the Jets finally came alive, overcoming that deficit to take an 18-14 lead. Both teams battled back and forth for the remainder of the first half and the score was tied 32-32 at halftime.

Sophomore Brice Paster came off the bench to lead the Jets in scoring with 11 points, including three three-pointers. Jarius Carroll was close behind with nine points and both Toriano Lewis and Jalen Reynolds each scored eight points.

The Jets will travel to Barnesville on Wednesday, January 29 for a 7:30 p.m. game against Gordon College. Both teams will then play at home on Saturday, February 1 when they host East Georgia State College at 1 p.m. and 3 p.m.