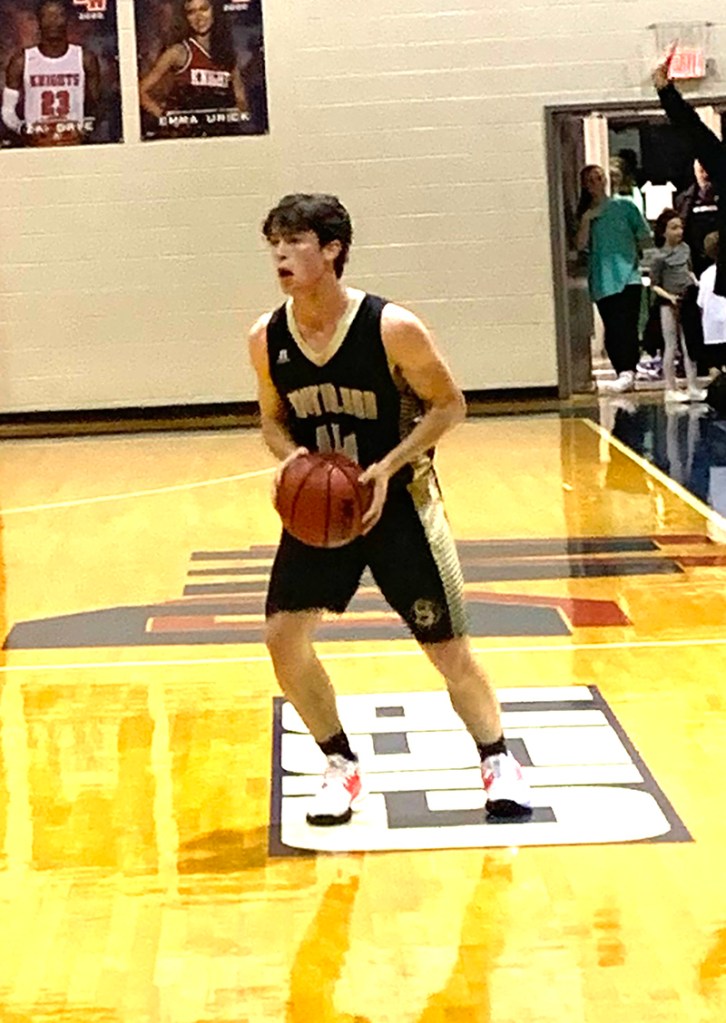 ALBANY – Friday night’s rivalry game between Southland Academy (SA) and Deerfield-Windsor (DWS) turned out to be a game that one would expect it to be between two fierce rivals. The Raiders came into this game wanting to exact revenge for the 61-58 overtime loss to the Knights (9-13, 7-0) back on Thursday, January 16, in Americus. SA also wanted to improve its position in the Region 3-AAA standings.

Thanks to plays made down the stretch in the fourth quarter on both ends of the court, the Raiders were able to accomplish both of those goals by beating the Knights 59-49 on Friday, January 31, at the W.T. Henry Gymnasium on the DWS campus.

While he was extremely happy with his club’s victory, SA Head Coach Rundy Foster was quick to praise the strong tradition and accomplishments of the
DWS basketball program.

“I’ve got the utmost respect for Deerfield and their past and what they’ve accomplished in the past,” Foster said. “They’ve got a great program. Bill (Cefaratti), their coach does a great job with them. He’s done a really good job with them this year. We were just fortunate enough to get the win.” 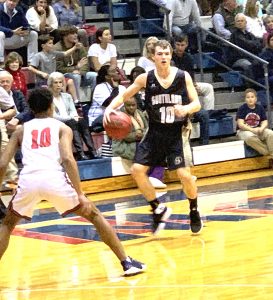 Southland Academy junior point guard Max Foster scored 13 points, including three-three-pointers and made a crucial steal down the stretch to help the Raiders pull off the 59-49 win at DWS.
Photo by Ken Gustafson

As a result of their win, the Raiders improve to 14-4 overall and 5-2 in the Region 3-AAA standings. They currently sit in second place behind Brookwood (TBS), who is undefeated in region play at 7-0. The Warriors defeated Valwood 50-35 on Friday night. By virtue of that win, TBS will finish the season in first place in the region standings and will be the #1 seed in the upcoming Region 3-AAA Tournament to be held at Georgia Southwestern State University. The Warriors’ win over Valwood also means that the Raiders will be the #2 seed and will have to face the #3 seeded Knights in 13 days in the first round of the region tournament.

Nathan Duke posted a double-double to lead the Raiders in the win over DWS. Duke scored 17 points and pulled down 13 rebounds. Max Foster was also in double-figure scoring with 13 points, including three three-pointers. All of those three-pointers came in the second half. Owen Exley scored eight points and Hunter McCain chipped in six in the winning cause.

Smith Flynn led DWS in scoring with 13 points and Thomas Ray poured in 10.

Jordan Moser was almost in double figures, as he scored nine points.

The Raiders jumped out to a 6-3 lead to start the game, but for the rest of the first quarter, both teams wen toe to toe and SA had a 14-12 lead by the quarter’s end. In the second quarter, Luke Law scored on a layup to cap off a 9-2 run by the Raiders to extend their lead to 23-14. 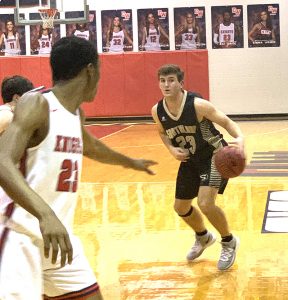 For much of the first half, the Knights tried to score by attempting outside shots, but they were unable to hit most of those shots. This allowed the Raiders to take advantage at the offensive end.

However, in the waning seconds of the first half, DWS scored four unanswered points and only trailed the Raiders 27-23 at the half.

Nathan Duke scored nine of his game-total of 17 points to lead SA in the first half.

The Knights struck again from beyond the arc, as Jordan Moser knocked down a three-pointer to regain the lead for DWS. The three-point shots that were not falling for the Knights in the first half started falling in the second. For the game, DWS knocked down six three-pointers, while the Raiders were able to knock down four.

Over the next couple of minutes, the Raiders struggled to score, but Exley was able to score on the inside with 1:15 to go in the third quarter to cut SA’s deficit to 38-35. The Raiders fired the last two salvos of the quarter when Foster knocked down a three-pointer to tie the game and Exley scored a layup to give SA a 40-38 lead to start the fourth quarter.

Just seconds into the final quarter, Hunter McCain scored for SA after grabbing an offensive rebound. Foster followed that up with another three-pointer to increase the SA lead to 45-40 before timeout was called with 5:49 left in the game.

Both teams traded baskets over the next minute, but the Knights would tie the game at 47-47 on a layup and a three-point play by Moser.

With a little less then three minutes to play, SA had a 49-47 lead, but DWS had the ball with a chance to tie. However, Foster came up with a crucial steal and a fast-break layup to give the Raiders a 51-47 lead.

Over the next few seconds, both teams traded baskets, but Foster got fouled with under a minute left and sank two free throws to give SA a 55-49 lead. The Knights were unable to respond on offense and the Raiders knocked down a few more free throws to salt away the victory.

While he was obviously happy with the victory, Coach Foster knows that his club has its work cut out in the upcoming region tournament.
“There are about five teams that could win that region tournament. We’re going to have to come play every game,” He said.

Before the Region 3-AAA Tournament at GSW next week, the Raiders will try to take care of business in their regular-season finale at home against Brookwood (14-7, 7-0) on Tuesday, February 4. In the last meeting between the two teams, the Raiders fell 46-41 in Thomasville on Saturday, January 25. Tip off for Tuesday night’s game is scheduled for 7:45 p.m.