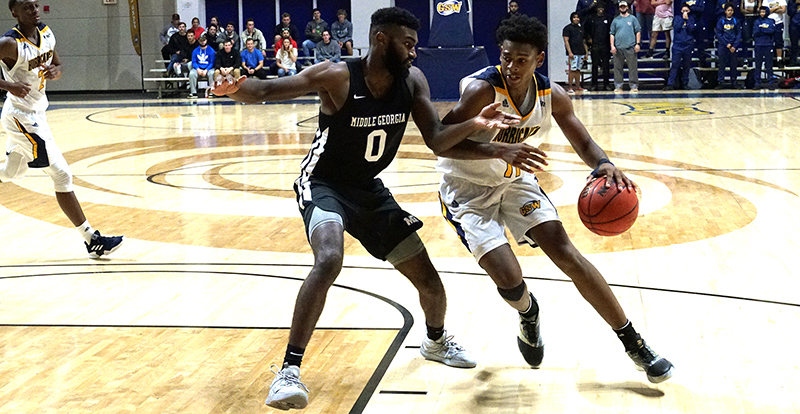 AMERICUS – The Georgia Southwestern State University (GSW) men’s basketball team had just come off of a thrilling 79-77 overtime victory over Young Harris College on Thursday, February 20 and were hoping to keep their winning streak going when they hosted the Saints of Flagler College (FC) for Homecoming on Saturday, February 22. However, the Saints jumped out to a 52-32 lead and though the Hurricanes tried to make a comeback, they could not overcome their double-digit deficit and fell by the score of 99-80 at the Storm Dome.

With the loss, the Hurricanes’ two-game winning streak comes to an end. They are currently 10-14 overall and 5-13 in the Peach Belt Conference (PBC).

Four Hurricanes scored in double figures. Jamari Dean led GSW in scoring with 23 points on 7 of 20 shooting and Devon Higgs poured in 15. Abdul Dial scored 14 points and Jalen Cameron chipped in 13 in the losing cause.

The Hurricanes got off to a great start in this game as they jumped out to a 10-2 lead on a jump shot by Higgs. Over the next few minutes, GSW would maintain at least a seven-point advantage until FC’s Damerit Brown drilled a three-pointer to bring the Saints to within four points at 14-10. From that point up until the 6:49 mark of the first half, both teams traded baskets, but FC took a 23-19 lead on a basket from Damir Hadzic. From that point until halftime, the Saints began to exert their will on the game. They went on a 16-6 run to take a 39-25 halftime lead.

In the second half, FC maintained their double-digit lead and went up by as much as 21 points. They took a 58-37 lead over the Hurricanes on a three-pointer from Allante Pickens with 16:07 to play. GSW tried to get back in the ball game as they cut the FC lead to 13 at 64-51 on a basket from Dean at the 12:02 mark. Having been fouled on the play, Dean made the free throw to bring the Hurricanes to within 12. The Saints continued to maintain their double-digit lead over the next several minutes, but the Hurricanes were able to cut that deficit to 11 on a basket from Soloman Thomas, making the score 85-74 FC.

FC had four players in double figures. Gedi Juozapaitis led all scorers with 27 points on 9 of 14 shooting and hit six three-pointers. Brown was next with 25 points and he also nailed six three-pointers. Both Pickens and Chris Metzger each scored 12 points for the Saints to round out their double-digit scoring.

The Hurricanes will try to rebound from this setback when they travel up to Columbus to face the Cougars of Columbus State on Wednesday, February 26, at 7:30 p.m.