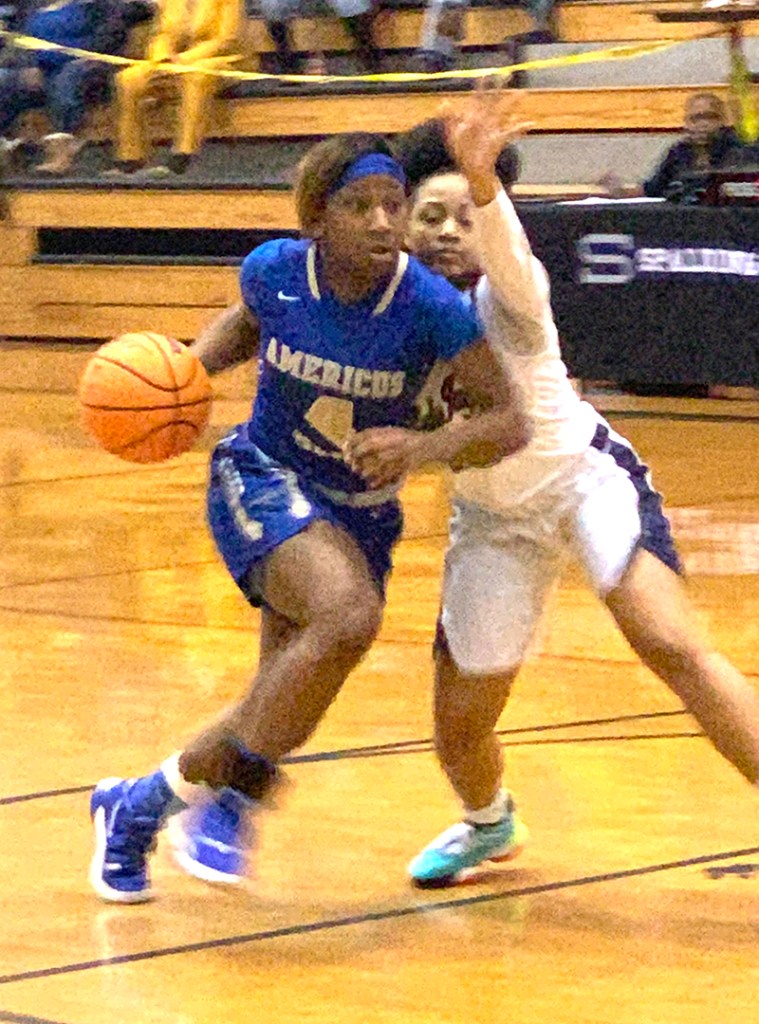 Americus-Sumter senior guard Trinity Jones scored 21 points to lead the Lady Panthers to a 47-42 victory in the Elite 8 of the GHSA Class AAAA State Playoffs. Photo by Ken Gustafson

GRIFFIN, GA – A week ago after the Americus-Sumter Lady Panthers basketball team (ASHS) defeated Marist to advance to the state quarterfinals of the GHSA Class AAAA State Basketball Tournament, ASHS head coach Sherry Harris expressed concern over her club’s inability to consistently knock down foul shots. However, in the second half of the Lady Panthers’ state quarterfinal game at Spalding, ASHS made 10 of 14 foul shots and defeated the Jaguars 47-42 on Wednesday, February 26, at Spalding High School (SHS).

The foul shooting by the Lady Panthers in the second half was a stark contrast to what they shot in the first half. ASHS made five of 13 free throws in the first half and it was something that Harris addressed with the team at halftime.

ASHS senior guard Trinity Jones, who led the Lady Panthers in scoring with 21 points, made nine of 10 foul shots in the fourth quarter to help lead ASHS to victory. 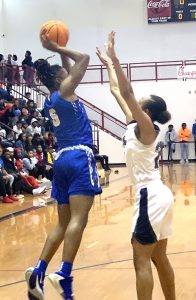 As a result of the win, ASHS (27-2) will advance to the Class AAAA Final Four at Fort Valley State University, where they will take on Luella on Friday, February 28, at 6 p.m.

Both teams struggled to score in the early minutes of the game, but ASHS sophomore Trinity Jackson was able to make one of two free throws to give the Lady Panthers a 1-0 lead. Over the next few minutes, both teams traded baskets, but ASHS was able to take a 10-6 lead on an offensive rebound and put back by senior forward Brianna Pope. However, the Jaguars responded with four straight points to tie the game at 10-10 by the end of the first quarter.

SHS took a 13-10 lead on a three-pointer by Kierstyn Milner, prompting Harris to call a timeout. Out of the timeout, both teams continued to trade baskets, but the Jaguars took a 20-16 lead on a three-pointer by Gabby Ponder with a little over three minutes left in the half. However, Reese was able to throw an outlet pass to Goodman for a layup. With 1:55 to go in the first half, timeout was called with SHS maintaining a 20-18 lead. 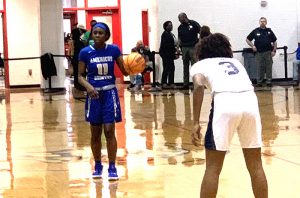 Out of the timeout, Jones drilled a three-pointer to give the Lady Panthers the lead, but Corriana Evans responded with a basket for the Jaguars. However, ASHS finished the first half with two made free throws from Reese to take a 24-22 lead at the half.

Evans drilled a three-pointer early in the second half to give the Jaguars a 25-24 lead. Early in the third quarter, the Lady Panthers struggled with turnovers, but were still able to keep pace with SHS. With a little over two minutes left in the third, Milner thought she had scored a basket for the Jaguars when she drove baseline and scored. However, Milner was whistled for a charge as Jones had established defensive position. 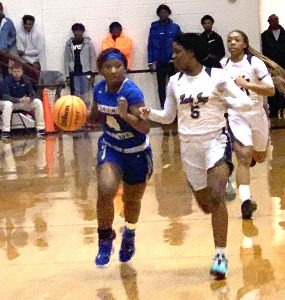 Trinity Jones pushes the ball up the court against Spalding. Jones made nine of 10 foul shots in the fourth quarter to help lead the Lady Panthers to victory.
Photo by Ken Gustafson

At the time, this was a big call in the game as Jones would later nail a three-pointer to tie the game at 31-31. Shortly before the quarter ended, the Lady Panthers got another basket to take a 33-31 lead into the fourth quarter.

During the latter part of the third quarter and into the fourth, the Lady Panthers decided to slow down their offense and stall to keep their players fresh and to concentrate on getting a good shot.

“We’ve been trying to get better closing out games in our half-court offense,” said Harris. “We’ve been up four or five…two or three and we’re trying to rush.” She went on to say that when teams come out and play man-to-man defense against them, she is confident in the fact that she has four players that can put the ball on the floor. “Anytime that happens, we’ve got to take advantage of that and attack the basket. We did a good job of closing it out,” said Harris.

ASHS was able to take a 36-34 lead on a basket by Reese, but Nuriyah Slaton scored to tie the game. Fortunately for the Lady Panthers, they were able to get two made free throws from Jones to take a 38-36 lead with a little over three minutes to play, but Evans could only hit one foul shot at the other end for the Jaguars.

With 3:21 to go, Jones was able to knock down two more foul shots to give the Lady Panthers a 40-37 lead. The free throws that had not been falling for ASHS in the last several games were starting to fall in the latter stages of this game. The practice that the Lady Panthers have been putting in of late was paying off.

“We shoot free throws during school, after school and during practice,” said Jelissa Reese.

Down the stretch, it was clear to everyone in the building that the game’s outcome would be decided at the foul line. Ponder had a chance to bring the Jaguars to within one, but could only hit one free throw. Jackson scored for the Lady Panthers, but Astoria James responded with a basket to pull SHS to within two at 42-40. 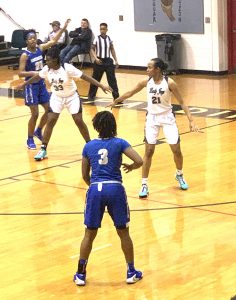 Shortly thereafter, Jones scored a crucial basket on a layup and the Jaguars tried to respond, but Evans could not get her layup to fall and the Lady Panthers got the rebound.

The Lady Panthers were able to knock down a few more free throws to salt away the 47-42 victory.

The Jaguars (23-5) were led in scoring by Evans with 18 points. Ponder was also in double figures with 11 points.

The Lady Panthers will now turn their attention to the Lady Lions of Luella, who will be their opponent in the GHSA Class AAAA semifinals at Fort Valley State University on Friday, February 28. The Lady Panthers are encouraging all ASHS fans to come to the “Rally at the Valley”. Tip off for the ASHS semifinal game is scheduled for 6 p.m.