By: Evan A. Kutzler

The violence on June 21, 1913, that took these lives did not occur in isolation. Even street names—Cotton Avenue becomes Forrest Street where it crosses Lamar—point to a larger historical context. Americus became a small city as cotton exports rose from 42% to 61% of all U.S. exports. Meanwhile, an internal slave trade increased the African American population in southwest Georgia from 219 in 1820 to 63,000 in 1860. In the twentieth century, the vagrancy laws that brought Chief Barrow to Cotton Avenue propped up a plantation economy fifty years after slavery. Across the intersection, the street becomes named after Nathan Bedford Forrest, a Confederate general and the first leader, or “Grand Wizard,” of the Ku Klux Klan. The intersection, a crossroads loaded with historical symbolism, has no intentional acknowledgement of the lynching. 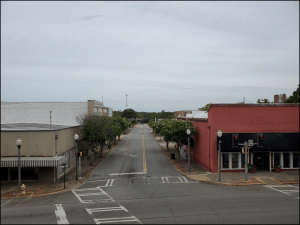 The lynching was never forgotten, but remembering has come in ephemeral ways. The newspaper accounts, including denunciations by local white churches, attempted to give meaning to the violence. This was common after lynchings elsewhere. A few weeks later, after the all-white, all-male grand jury failed to bring any charges against their own, calls for justice fell silent as they did after lynchings in other cities. Alan Anderson’s chapter, “An Unwarranted Act of Brutality and Barbarism,” in Remembering Americus Georgia: Essays on Southern Life (2006) was one of the first attempts to bring the story out of the shadows.

One of the first public acknowledgements of the lynching by the Americus Police Department came in aftermath of a recent tragedy. Reflecting on the murders of police officers Nicholas Smarr and Jody Smith in the line of duty and the suicide death of Minguel Lembrick, Police Chief Mark Scott contrasted outcomes in 1913 and 2016. In Scott’s view, the recent tragedy brought Americus closer together. The police chief also took the moment to commend the LaGrange Police Department for formally apologizing for a 1940 lynching in their city. Scott wrote, “it is important for us to acknowledge and apologize for the wrongs that have been committed in the past so that we can move forward and embrace the future.”

The silence from the African American community in the aftermath of the 1913 lynching can be perceived to be about safety. The NAACP listed the Redding murder in The Crisis alongside 78 other lynchings that year. In Americus, though, as in the aftermath of other mass lynchings, there was no safe way to protest as there was in recent local marches. It took another two generations for private memories to become part of the local discourse about inequality during the Civil Rights Movement.

The effort to commemorate the Civil Rights Movement has given new meaning—and new urgency—to the lynching. Sam Mahone, Chairman of the Americus-Sumter County Movement Remembered Committee, sees in the lynching the long-arc of history. “We would be remiss of any suggestion that the Americus Movement began in the 1960s,” Mahone wrote to me. “It began decades earlier with black men and women in Sumter County who, despite the brutality of oppressive and violent measures meant to deny their existence, somehow prevailed and lived to share that horror.” 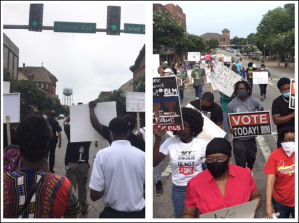 Marchers crossing the intersection of Cotton/Forrest and Lamar, 2020, photograph by Thomas Weber.

Private memories, as Mahone hints, were passed down from one generation to the next in both black and white families. Laura Ansley, for instance, a white woman who lived on Church Street, resided in Americus until her death at age 97 in 1991. She described hearing the lynching from one block away. “Be glad that you are fortunate enough to be away from Americus,” she wrote to her future husband, “and be especially glad that you were not here Saturday night. Oh, it was terrible!” That the Hale family kept the letter suggests that the event haunted members of the white community as well.

There are two monuments for Sumter County at the National Memorial for Peace and Justice in Montgomery, Alabama. The memorial, built by Bryan Stevenson and the Equal Justice Initiative (EJI), opened in 2018 and contains 800 rectangular, steel boxes with county names, victim names, and dates. As one walks through the memorial, the floor descends revealing that the steel coffins with 4,400 names are suspended in air. There are monuments for each US county that had a documented lynching. It turns the visitor into a symbolic witness of racial terror. The monument for Sumter County has two names: Babe Yarbrough and William Redding.

Accounting for the victims of racial terror, whether by the NAACP in the early twentieth century or the EJI today, can never be complete. In addition to Babe Yarbrough, a lynching victim buried in Eastview Cemetery in 1912, Hamp Hollis was lynched near the Friendship community in northwestern Sumter County. The name of Daniel Stallings, gunned down by Redding’s pursuers, is also absent. There are whispers of many more undocumented victims.

Listing the names is one way to commemorate individuality that violence and time has dulled. It is often difficult to recover much more than a victim’s name though. Two William Reddings appear in the census records in Sumter County. They offer possible snapshots of the historical William Redding. The earliest record is the least clear. In 1900, a Will Redding appears as the eleven-year-old son of a widowed mother named Matilda Garvey (or possibly Guerry) at what is today 408 S. Jackson Street. A white family lived in the main house that still stands. Matilda and William lived in a one-room building by the alley.

There is another possibility. Between 1900 and 1910, a Redding family moved from Richland, Georgia, to the vicinity of Plains. The parents, Wash and Lula Redding, were born into slavery. Their children, Ozie, Dosia, Nathan, Minthie, as well as their son-in-law, Erastus Ross, all came of age in the twentieth century. Here “Willie” Redding appears as a wage earner on a farm who could read and write and had recently attended school. This William Redding would have been about eighteen at the time of the lynching.

This Redding family, like Matilda Garvey and William Redding, did not appear in the 1920 census. From World War I to World War II, more than one million African Americans left southern states not only for economic opportunity but also, as the National Memorial to Peace and Justice makes clear, in an attempt to escape racial terror. The black population of Sumter County fell by 3,953 people (19 percent) between 1910 and 1930. Daniel Stallings’s son was part of this movement of people. It is likely that at least part of the immediate Redding family left the region as well.

At the National Memorial for Peace and Justice, a second steel memorial for Sumter County lays on its back. This duplicate memorial might one day come to Americus to acknowledge racial terror. This is part of the EJI’s goal to have honest conversations about tough history. Other communities, as part of EJI’s Community Remembrance Project, have created websites, videos, brochures, high school essay contests, art exhibits, performances, and other products to tell or symbolize these histories. In 2019, Sam Mahone and the ASCMRC submitted an initial application for the monument that would contrast to the region’s many Civil War era and Confederate monuments. “Few monuments or memorials address the history and legacy of lynching,” Mahone argues, “and only a handful of those who perished have ever been publicly acknowledged.”

The EJI has not yet begun to send monuments to what will be their final resting places. In the meantime, though, the City of Americus, local schools and nonprofit organizations, and individuals might assist the ASCMRC by beginning a public conversation about injustice in the past and present. Silence has not erased what happened at this intersection just as turning the page does not erase preceding text. This series can only begin to draw attention to this important place and difficult history. It will be up to a community of local leaders, artists, and citizens—including people who read this article—to decide what commemoration at the intersection of Cotton, Lamar, and Forrest can look like.

The lynching in 1913 was neither the beginning nor the end of racism or racial violence. It was also not unique to Americus. Talking about this history matters because, as Mahone writes, it helps us “understand what happened, why it happened, and how it shapes our lives today. The history we uncover, collect, and preserve will allow a window into the lives of an oppressed people who, despite the unimaginable terror they experienced, survived and paved a path for the generation that followed.” It took hundreds of people to destroy Redding’s body. How many will it take to commemorate the injustice?

“Very Relieved that the Primaries are Over”, Pres. Carter Earns 1980 Delegate Majority