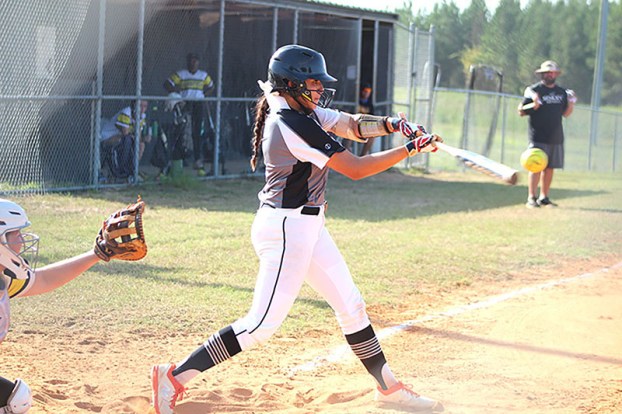 Schley County first baseman Zoe Molina went 2 for 2 with a single, a double and two runs scored to help the Lady Wildcats earn a 5-2 victory over Hawkinsville. Photo by Sheila DeVane

Jade Sellars led the Lady Wildcats’ offense by going 2 for 2 with two runs scored. Zoe Molina also had a strong day at the plate, as she went 1 for 3 with a double and two RBIs.

SCHS took an early 2-0 lead in the bottom of the first inning. With runners on first and third and two outs, Berkley Goodin belted a double to left field, bringing in Sellars and Makena Wurtz for the first two runs of the game.

The Lady Red Devils scored a run on the top of the fourth, but the Wildcats responded with two more runs of their own. With runners at first and second and two outs, Molina doubled to center field, scoring Hannah Crawford and Sellars to give SCHS a 4-1 lead.

HHS scored a run in the top of the sixth to get to within two, but the Lady Wildcats added an insurance run in the bottom half of the inning when Crawford drove in Goodin on an RBI single.

Wurtz, who came on in relief of starting pitcher Ashlyn Childs, was able to retire the Lady Red Devils’ hitters in order in the top of the seventh to secure the victory for SCHS.

Childs pitched the first two innings for the Lady Wildcats and gave up no runs on one hit, while walking one. Wurtz came on in the second inning in relief of Childs and went the rest of the way. She gave up two runs on two hits, walked one and struck out one.

Up next for SCHS is a home game on Tuesday, October 7, against Chattahoochee County. First pitch is scheduled for 5:30 p.m.

From Staff Reports     BUENA VISTA, GA – Over the past two years, there has been one constant thorn... read more