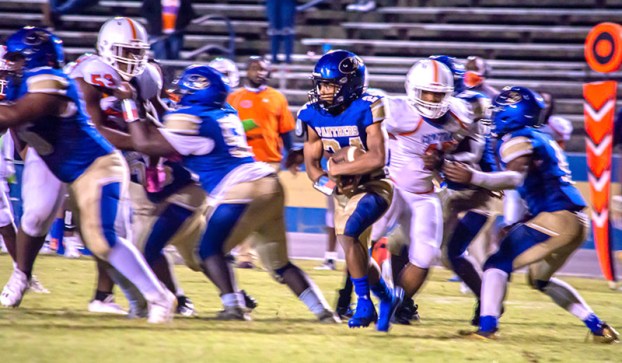 ASHS junior running back Jarod Lewis fights for yardage against the Chargers of Central-Macon. Photo by James Cochran II

AMERICUS – Due to various COVID-19 issues with their opponents, the Americus-Sumter High School football team (ASHS) had to wait until Friday, October 2 to play their first home game of the season against Central-Macon (CM). It would be their first game as a new member of GHSA Class AAA Region 2 and the Panthers were hoping to get their first victory of the season. However, it was not to be, as the Chargers defeated ASHS 22-11 at Alton Shell Stadium.

“Our defense kept us in the ball game, just as it has all year,” said ASHS Head Coach Ross Couch. “Coach {Ken} Eldridge has done a great job planning for our opponents, especially with so many new starters and first-time defensive players on the field. Offensively, we have to find an identity and that comes down to me doing a better job of establishing our base plays and me doing a better job of getting our offensive line prepared. If we can’t run block and if we bust pass protections, we aren’t going to be successful in any phase of our offense. I’ve got to get those guys coached up better.”

Things started off well for ASHS. The Panthers were able to move the ball down into CM territory and Alex Vasquez nailed a 35-yard field goal, giving the Panthers a 3-0 lead. ASHS added to its lead later in the first quarter when the Panther defense was able to force a safety.

However, the Chargers answered by scoring a long touchdown by Maurice Elder when he caught a short pass, broke a tackle and ran the ball 50 yards for the score. Both teams went into the locker room at halftime with CM leading 7-5. 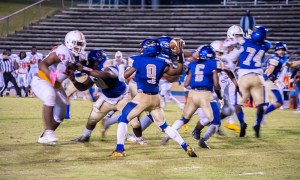 The Panthers took the lead in the third quarter when quarterback Anthony Tyson, who was filling in for the injured Cameron Evans, scored from one yard out. ASHS decided to go for two by faking the extra point and throwing a pass, but the two-point try failed and the score remained 11-7 in favor of the Panthers.

Unfortunately for ASHS, the Chargers took control the rest of the way. With four minutes left in the game, quarterback Jalik Thomas scored a rushing touchdown from 13 yards out and the two-point try was good to give CM a 15-11 lead.

The Panthers tried to mount a comeback, but were forced to turn the ball over on downs in the closing minutes of the game. Then the Chargers put the icing on the cake with 1:30 to go when Thomas scored his second touchdown of the game, this one from three yards out. The extra point was good and CM went on to defeat the Panthers 22-11.

“We had opportunities to win the game. We had run concepts that were getting us positive yards and we had pass concepts wide open,” said Couch. “It just comes down to execution and schematic preparation. I’ve got to get us where we need to be quickly.” 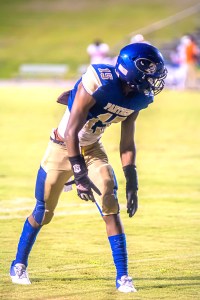 In spite of getting off to a rough start in 2020, Couch is pleased with the effort that his ASHS team has put forth so far this year considering the circumstances.

“The kids are playing as hard as they can for as long as they can. We’ve got seven or eight guys going both ways for most of the game and that makes it tough to make adjustments and that makes it tough to change our tempo offensively,” said Couch. “We’ve had two games now where we’ve tried to spread the field more and go up tempo and our guys wore out by the end of the game. I’ve got to manage the clock better, substitute guys more often to keep legs fresh and establish a more effective run game to keep the clock moving and shorten the games.”

From Staff Reports     ELLAVILLE – The Schley County High School Softball Team is on a roll. Having defeated... read more