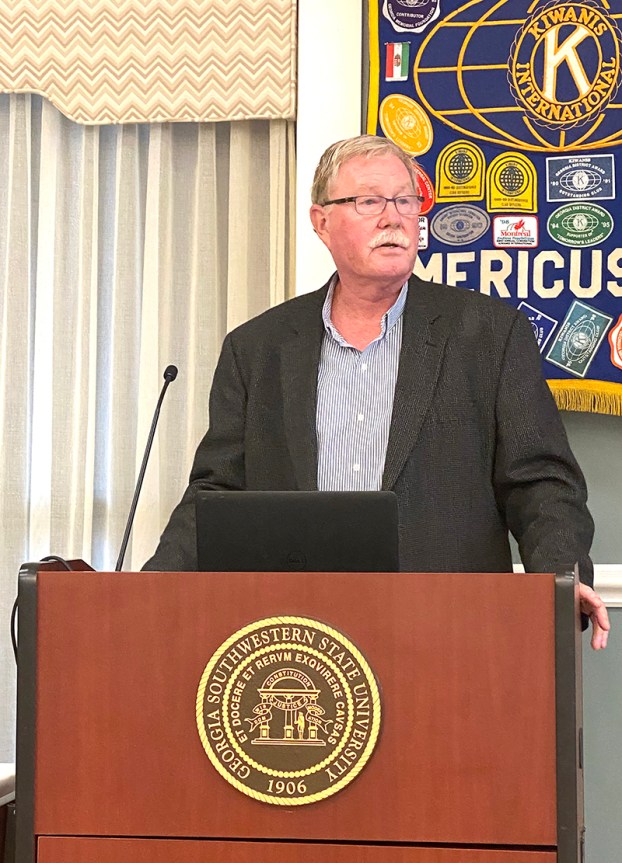 Sumter County Tax Commissioner Wilkie Smith is running for reelection as the incumbent republican candidate. He made his case at a meeting of the Americus Kiwanis Club as to why he should be reelected. Photo by Ken Gustafson

AMERICUS – On Friday, October 9, the candidates for the office of Sumter County Tax Commissioner tried to make their cases for why they should be elected to those positions at the weekly meeting of the Americus Kiwanis Club (AKC), which was held in the dining hall of the Marshall Student Center on the campus of Georgia Southwestern State University.

Each candidate had seven minutes to make his or her case as to why they should be the one to be elected. Wilkie Smith, who currently serves as the incumbent Sumter County Tax Commissioner, is running against the democratic candidate Twany “Buffy” Edwards. Edwards was not able to be at the meeting due to a prior commitment, but submitted a written statement to Herschel Smith, the moderator of the forum, as to why she should be elected as the next Tax Commissioner of Sumter County. Smith read Edwards’ statement to the AKC and to those watching by way of Zoom.

“Dear citizens of Sumter County, my name is Twany “Buffy” Edwards, candidate for the Office of Sumter County Tax Commissioner. I apologize for not being here today, as I had a prior engagement,” Edwards wrote. “To tell you a little about myself, I’m the daughter of the late Herschel Edwards and Mrs. Irma John Walton Fish and the descendent of Rudolph and Walter Edwards, who are among the largest agricultural farmers in the area. As a native resident, I have a vested interest in making sure the Sumter County Tax Office is able to meet the demands of the 21st Century in order to provide for our economy and customer service to all the members of our community. With a Master’s Degree in Accounting and 15-plus years of experience, I’m ready, willing and able to serve as your next Sumter County Tax Commissioner. Working in Customer Service and as an office manager, I have hewned my leadership and organizational skills. Further more, knowledge and skills of the income tax, business taxes, property taxes, Ad Valorum taxes, tax entitles have prepared me for the position. As Tax Commissioner, I’m not coming to change, but to enhance and improve functionality in the tax office,” wrote Edwards. “My goals are to update current technology and to educate the community in order to increase productivity and efficiency. My vision is to work for the people, while working with the people. Therefore, I ask for your support, along with your vote on November 3. When you cast your ballot, vote and elect Twany “Buffy” Edwards for Sumter County Tax Commissioner.” 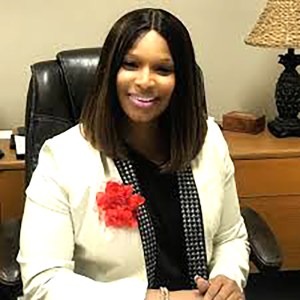 Twany “Buffy” Edwards is running as the democratic challenger against Wilkie Smith for the Office of Sumter County Tax Commissioner.
Submitted Photo

Once Smith finished reading Edwards’ statement, Wilkie Smith, the incumbent republican candidate, addressed the AKC and tried to make his case as to why he should be reelected as Sumter County Tax Commissioner.

He started out by talking about his childhood and adolescent years growing up in Americus. He mentioned that he is a cousin of retired Sumter County Sheriff Pete Smith and that his son, 19-year-old Adam Smith IV, is in the Pre-Engineering Program at GSW. When talking about his childhood, Smith mentioned that his parents did not want him and his siblings to walk to school because they were afraid they would stumble upon a “ball game” and would not make it to school.

Smith also talked about his prowess on the baseball diamond and the fact that the Atlanta Braves drafted him. He mentioned that he was both a high school baseball and softball coach, as well as a former baseball coach at GSW. Smith mentioned the various coaches here in Sumter County that made an impact on his life, such as Coach Jack Finklea at the Recreation Department. “Many of the greatest athletes to come out of Americus got their start with Coach Finklea,” said Smith. “I have a huge list of persons I have come in contact with through the years who I have the greatest respect for and who taught me so much. I saw how they coached, how they thought, how they taught, disciplined and mentored young people. Though my biggest influences were my parents and my church family, I cherish those who made an impression on me for life. I do not believe I could have grown up and raised a family in a better community than Americus & Sumter County, GA,” continued Smith.

In addition to those things, he mentioned that he has been a high school assistant principal, the head of a school, a business owner and is now the Tax Commissioner of Sumter County. Smith also talked about his family’s history of public service, including the fact that his mother, Sue Smith, served Sumter County as its Probate Judge for 20 years, having been successfully elected to five terms and retiring in 1988. He also mentioned that his father, Bully Smith, sold automobiles for 50 years here in Americus.

Smith also talked about how he survived cancer and married Nancy Cheek Smith, who spent 35 years in the Clerk of Court’s Office, beginning in 1981 as a Deputy Clerk and was later elected to Clerk of Superior Court unopposed for four terms and retired in 2016. Smith told the story of how he and his wife Nancy married later in life and how he survived cancer in 1986. “With me taking chemo radiation and steroids, children kinda fell off the radar, but God had a plan and blessed us with a son in 2001 when Nancy was 39 years old and I was two weeks shy of 46,” said Smith. “Although I will be 65 this month, this soon-to-be 19 year-old outstanding young man, Adam IV, is in the Pre-engineering program right here at this wonderful university, GSW.”

Smith added that he is “the old Tax Collector” and that he thanks the Lord every day that he doesn’t have to determine the value of property, set the mileage rate or set fire fees.

Smith continued by stating that he has worked closely with the County Finance Department, the Board of Commissioners, Sumter County Schools, the Tax Assessor’s Office and the Department of Revenue in an effort to coordinate all these groups to produce a Countrywide Tax Digest, which is a requirement of every county. “This digest must be approved by the State Auditor. Then the State Revenue Commissioner issues an order to print a bill and collect taxes,” said Smith.

He added that for eight years, this has been done on time and every time with no extensions needed and that it’s all because of the teamwork among these groups.

Smith went on to say that the catch-up payment plans have been a huge success during his tenure as Tax Commissioner and that his department has had a couple of tax sales per year. “These set the tone that we are serious about tax collection. It’s not going away,” said Smith. He added that his staff has waited on the public face to face and has taken nearly 1,400 telephone calls a month. Smith also mentioned that during his tenure as Tax Commissioner, his department has renewed 24,000 vehicle registrations, has done 3,022 vehicle title transfers and has “caught hell” from nearly 542 customers who had an insurance lapse that his department had nothing to do with. He went on to say that his office has issued 17,000 property tax bills by mail, face-to-face or online and has issued over 600 separate mobile tax bills.

Smith continued by mentioning that nearly $30 million passes through the Tax Commissioner’s Office and is disbursed to the county’s government, its school system and the cities of Leslie and Plains. “So many people and entities are relying on us for those amounts and the timeliness and accuracy of those distributions and we are there for them each and every month, on time, every time,” said Smith.

“The laws may change and we get technology upgrades on these systems periodically, but experience, stability and consistency are keys to good county and city government.”

Finally, Smith closed by asking the group in the room and those watching via the live stream to stay with him and his experienced staff who has humbly and graciously served Sumter County for the past eight years and that there is no reason to change.

AMERICUS – On Tuesday, October 6, the Sumter County Chamber of Commerce hosted a forum at which candidates for six... read more