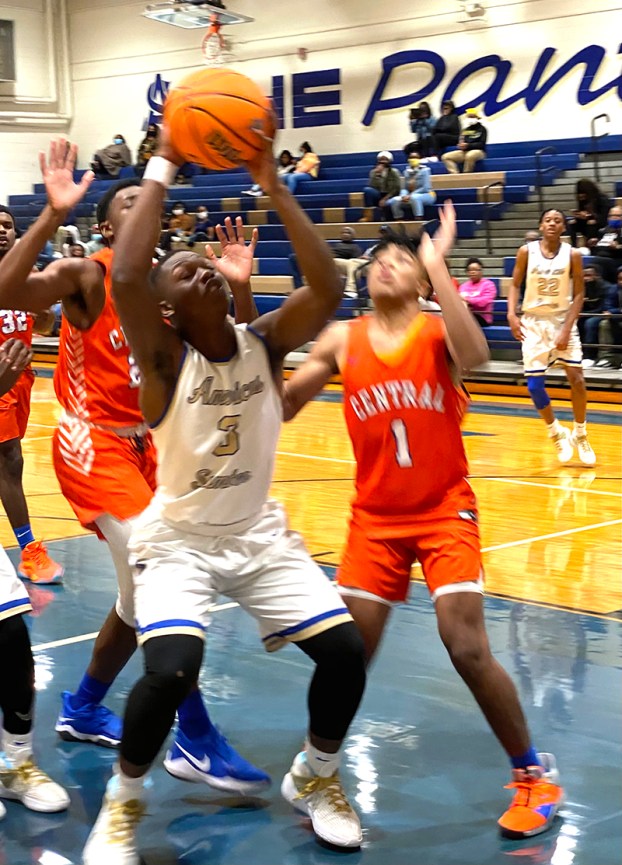 Americus-Sumter forward Keldrick Flemming led the Panthers with 16 points in their 73-44 win over Central (Macon). Photo by Ken Gustafson

By using their high-pressure defense to force turnovers and score transition baskets, the Panthers jumped out to a 13-2 lead early in the game and never let up on their way to a 73-44 rout of Central (Macon) in their first game as a new member of Region 2-AAA on Tuesday, December 1, at the Panther Den.

“We came out better and more aggressive than the last game,” said ASHS Head Coach Johnny Genwright. “We’ve still got a lot of work to do. Central is a pretty hard-working team. Our guys played harder and made shots. We did make shots tonight, which is something that we haven’t done in the past couple of games. We came out a little more intense and with more enthusiasm, so hopefully, we just get better and better. We’ve got to get better each game.”

In this game, Genwright was able to play every player that was available and almost every player scored at least one basket. The Panthers had three players in double figures. Keldrick Flemming led all scorers with 16 points and Brandon Pope scored 15. Darion Mitchell was also in double figures with 11 points. Elijah Westbrook scored seven points. John Monts and Daniel Dowdell each scored six points. Kyric Davis and Canaan Jackson each scored three points and both TaQuan Robinson and D.J. Hurley each scored two points to round out the Panthers’ scoring. 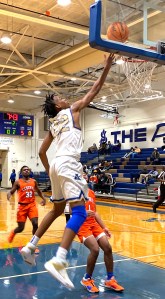 Due to COVID-19, the Georgia High School Association has decided to eliminate the jump ball to start each game this year. Instead, the visiting team will have possession of the ball to begin the game.

From the Chargers’ opening possession of the game, the Panthers forced their will on the contest. They played Americus-Sumter Basketball, which is defined by swarming, stifling defense that forces the opponent into committing turnovers and scoring points off those turnovers. This is the style that has been played by the Panthers for the last several years and, in the past, has led them all the way to the state finals. 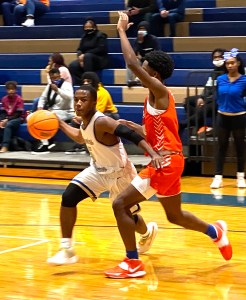 Americus-Sumter guard D.J. Hurley tries to get by his defender. Hurley scored two points in the Panthers’ win over the Chargers.
Photo by Ken Gustafson

But with nine seniors gone from last year’s 29-1 team, new faces have to emerge to take the mantle and they did on Tuesday night.

ASHS quickly jumped out to a 13-2 lead in the first quarter and that run included two three-pointers from Pope. By the end of the quarter, the Panthers had a 19-6 lead.

The dominance of ASHS was even stronger in the second quarter, as the Panthers continued to force turnovers and score transition points at the other end. Due to the pressure of the ASHS defense, the Chargers struggled in their offense to hit shots. The Panthers were also dominant on the boards in the first half. They were able to corral numerous offensive rebounds and were able to score several second-chance points as a result. The ASHS dominance in the first half was so complete that by halftime, the Panthers owned a 41-12 lead. 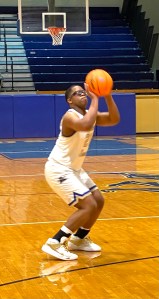 Americus-Sumter guard Daniel Dowdell lines up to shoot a three-pointer. Dowdell scored six points in the win over Central (Macon) and they came on two three-pointers.
Photo by Ken Gustafson

During the early minutes of the second half, both teams traded baskets, but the Panthers still maintained a 59-30 lead by the end of the third quarter. Though they struggled with their own turnovers at times in the second half, the Panthers were still able to limit the Chargers’ offense and did not allow CM to make a significant run. For the remainder of the game, the Panthers continued to try to push the ball on offense and continued to be aggressive on the offensive glass. 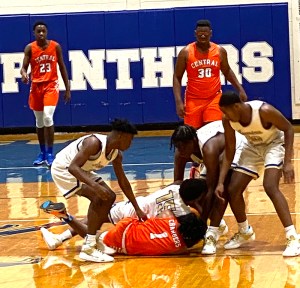 Americus-Sumter’s Elijah Westbrook fights for the ball with a CM player.
Photo by Ken Gustafson 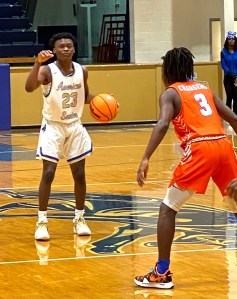 As far as Westover (WHS) is concerned, that game has been canceled due to the fact that the WHS boys’ team is in quarantine due to COVID-19 and because the Dougherty County School System (DCSS) is not comfortable with the Sumter County School System’s mask mandate policy. ASHS had originally scheduled games with WHS and two other Dougherty County schools, but because of the mask mandate policy issue, the DCSS has decided to cancel all games between its schools and ASHS.

The Panthers’ next game will be on Tuesday, December 8, at the Panther Den against Upson-Lee at 7:30 p.m.