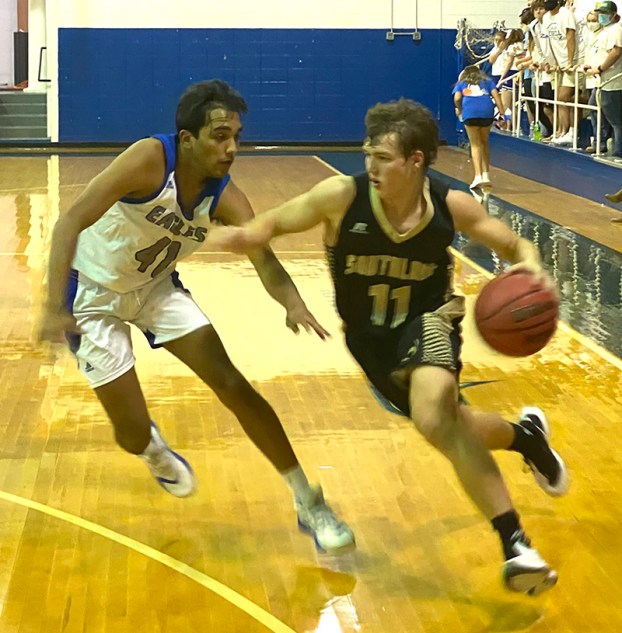 Southland Academy senior guard Max Foster (#11) tries to beat his defender off the dribble. Foster scored 16 points to lead the Raiders in their loss at Terrell Academy. Photo by Ken Gustafson

DAWSON, GA – With a little under seven minutes left in the game between the Southland Academy Raiders (SAR) and Terrell Academy (TA), one might have though that the Raiders were quite possibly going to orchestrate a come-from-behind victory against the Eagles. At halftime, the Raiders trailed TA 29-17, but they went on a 16-3 run in the second half to take a 33-32 lead. That run was capped off by a three-point play from SAR senior guard Max Foster, who scored while being fouled to tie the game and made the free throw to give his team its first lead of the contest. However, led by the torrid three-point shooting of TA guard Nick Chambless, the Eagles were able to reestablish control of the game and went on to hand the Raiders a 56-46 loss in their season opener on Friday, December 4, at Terrell Academy. 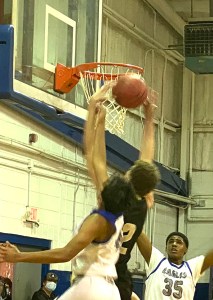 Southland Academy sophomore forward Carlos Tyson (#12) goes up for an offensive rebound and tries to score.
Photo by Ken Gustafson

Chambless, who scored 27 points to lead all scorers, hit four three-pointers in the fourth quarter to spearhead the Eagles’ offense and lead them to the victory over the Raiders. SAR was also without the services of senior guard Owen Exley and his brother, sophomore guard Luke Exley.

“We did some good things tonight,” said SAR Head Coach Rundy Foster. “We definitely missed the Exley brothers, who are still injured from football. Terrell has a good team. I’m pleased overall with how we performed for our first game.” 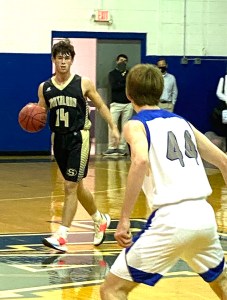 SAR senior guard Max Foster led the Raiders in scoring with 16 points, with nine of them coming from beyond the arc. Both Nathan Duke and Buddy Brady each scored eight points and Hudson Collins scored seven points in the losing cause.

The Raiders fell behind early, as TA jumped out to a 12-0 lead to start the game. Eight of those points were scored by TA forward Thomas McClendon, who ended up with 12 points on the night. SAR struggled for the remainder of the first half to trim the lead below double digits and went into halftime trailing 29-17. 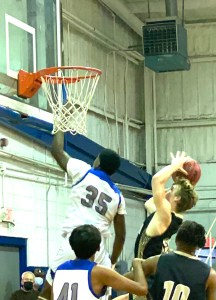 However, in the third quarter, the tide began to turn in the favor of SAR. With TA leading 30-19, the Raiders got points from Brady, Collins and Chase Ledger to close the gap to 30-25. Then Foster buried a three-pointer to bring SAR to within two at 30-28.

SAR was not done there, however. With TA leading 32-30, Foster scored the game-tying basket, was fouled on the play and made the free throw to give the Raiders their first lead of the ball game. However, the Eagles responded with four unanswered points, including a three-pointer by Chambless, to take a 37-33 lead with a little less than six minutes left in the game. 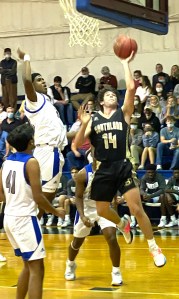 Nathan Duke scores on a layup for Southland Academy.
Photo by Ken Gustafson

Foster responded with another three-pointer to bring the Raiders to within one, but TA responded by going on a 7-0 run to take a 43-36 lead. That run would prove to be too much for SAR to overcome, as the Eagles were able to regain control of the game and went on to win 56-46.

The Raiders will try to rebound from this early setback when they host Southwest Georgia Academy on Monday, December 7, at 8 p.m.

DAWSON, GA – By halftime, the Southland Lady Raiders (SAR) had a 25-14 lead over the Lady Eagles of Terrell... read more