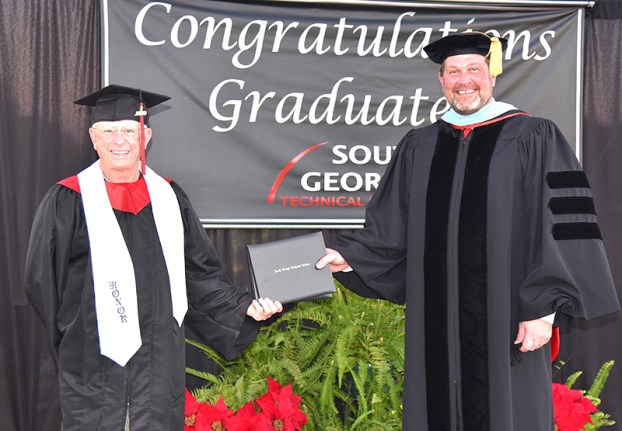 Jack W. Stanley (right) is shown above receiving his Associate Degree in Electronics Technology with Honors from SGTC President Dr. John Watford during the SGTC 2020 Drive-Thru Graduation ceremony. Stanley received his associate degree 53 years after earning his diploma in Electronics in 1967. Photo by Su Ann Bird

Over 400 individuals earned the right to participate in the SGTC Drive-Thru graduation ceremony along with Jack W. Stanley, a retired Telecommunications Executive from North Carolina who spent nearly 33 years with Time Warner before retiring after 45 years in the industry.  This was his first visit back to his alma mater since his first graduation in 1967.

The college honored each of the 2020 graduates during the COVID-19 pandemic by hosting a Drive-Thru ceremony.  Graduates were allowed to exit their cars to accept their diploma from SGTC President Dr. John Watford while family members looked on from the comfort of their cars.  SGTC took photos and video of the graduates and posted on social media and the SGTC website for graduates to download and keep. 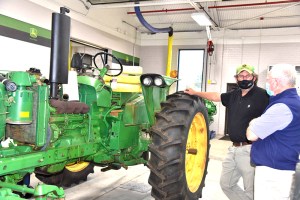 Jack Stanley toured the John Deere Ag Technology labs and is shown above talking with SGTC Ag Tech instructor Matthew Burkes about one of the tractors his students are overhauling an engine and helping to restore.
Photo by Su Ann Bird

Stanley enrolled and took the classes he needed to earn his Associate Degree in Electronics on-line from 2005 to 2007.  Since he had been out of college for a number of years and was new to online classes, he decided to take a diploma level Algebra class prior to taking college algebra.  That diploma level algebra class was the only class he failed to make an “A” in.  It also kept him from being a Presidential Honor Graduate with a perfect 4.0.  However, he still graduated with honors with an overall 3.8 GPA.

“I made an ‘A’ in the college algebra class and I might have been able to go straight into that class but I thought I needed a refresher since I had been out of school for so many years,” said Stanley.  “I was a little nervous about taking math online, but it worked out.” 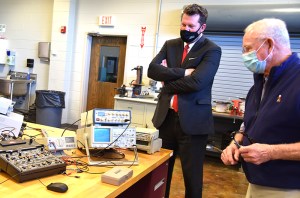 Stanley was very complimentary of the campus and how the college had changed over the past 53 years.  SGTC President Dr. John Watford toured Stanley around the campus prior to graduation and showed him the college’s Electronics Technology lab as well as the Aviation Technology, Caterpillar Heavy Equipment Dealer’s Service Technology, John Deere Agriculture Technology, and High Performance Engines/Motorsports Technology programs.

However, Jack Stanley’s face lite up with excitement when Dr. Watford took him back to the Griffin Building where Stanley had taken most of his classes in 1967.  “I walked into that classroom and I saw myself and my friends there just like we were 53 years earlier.  This brought back so many great memories,” said Stanley.  He went from room to room sharing stories of his classmates and instructors. 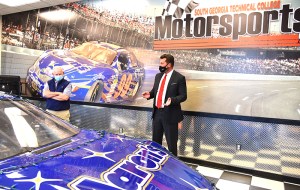 Jack Stanley is shown above looking at the Aaron’s Rents race car that SGTC has in its Motorsports Technology showroom.
Photo by Su Ann Bird

There was fresh paint on the walls and new flooring but Stanley quickly walked to where his desk had been.  He showed Dr. Watford where the lab was and remembered where his professors stood to teach.  He also showed Dr. Watford where he and his buddies played horseshoes and pointed out the tower that housed the ham radio and antennae.  He talked about the friendships he had made and the confidence his instructors instilled in him so he could work and succeed in the Electronics field.

“I had great instructors.  I was from a small community near Eastman and had grown up on a farm.  The things I learned here helped prepare me for my future.  I remember my first job.  I knew I was prepared and I felt like I had as much knowledge about electronics as anyone else,” said Stanley.

Jack W. Stanley retired as a Telecommunications Executive after nearly 33 years with Time Warner Cable and 45 years in the industry.  At the time of his retirement, he was the Regional Vice President Government Relations, Southeast, and was responsible for the company’s state/local government affairs interest and legislative policy for North Carolina, South Carolina, Alabama, and Virginia. 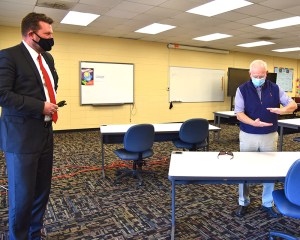 Dr. Watford took Stanley back to the original building where he took classes from 1965 to 1967.
Photo by Su Ann Bird

While Stanley rose to the top of his profession, he knew what it was to start at the bottom and work his way up.  In fact, his expertise and that of many others like him led to the rise of the industry that now delivers many of the things most people consider essential such as high-speed broadband services, digital telephone services, home networking, and home security services as well as hundreds of linear video channels.  “We built an industry from the late 1960’s to the 2000’s and literally wired a nation,” said Stanley.

His advice to the young people today is simple.  “Find something you like to do and go be the best you can be.”

Stanley currently lives in Summerfield, NC, but maintains and manages his home place in Dodge County, Ga., which is now named Pine Barrens Plantation, LLC.    This is an enterprise dedicated to principled stewardship, sound conservation practices and preservation of native longleaf forest habitat in its historic range in Georgia.

Even though he has retired, Stanley still has a passion for “things technical in nature.”  He also has a passion for history and realizes that his most important accomplishment is his family, which includes four children and 12 grandchildren.  North Carolina Congressman Howard Coble summed up Jack Stanley and his impact on the career he chose with this statement, “the depth of his experience and knowledge about the cable industry is matched by the depth of his character and judgment. When you shake hands in agreement with Jack Stanley, you do not have to wonder whether you have a deal.  A modest man, who came from modest means, he doesn’t seek attention – but he deserves it.  Jack is a true Southern gentleman in the best sense of that term.”