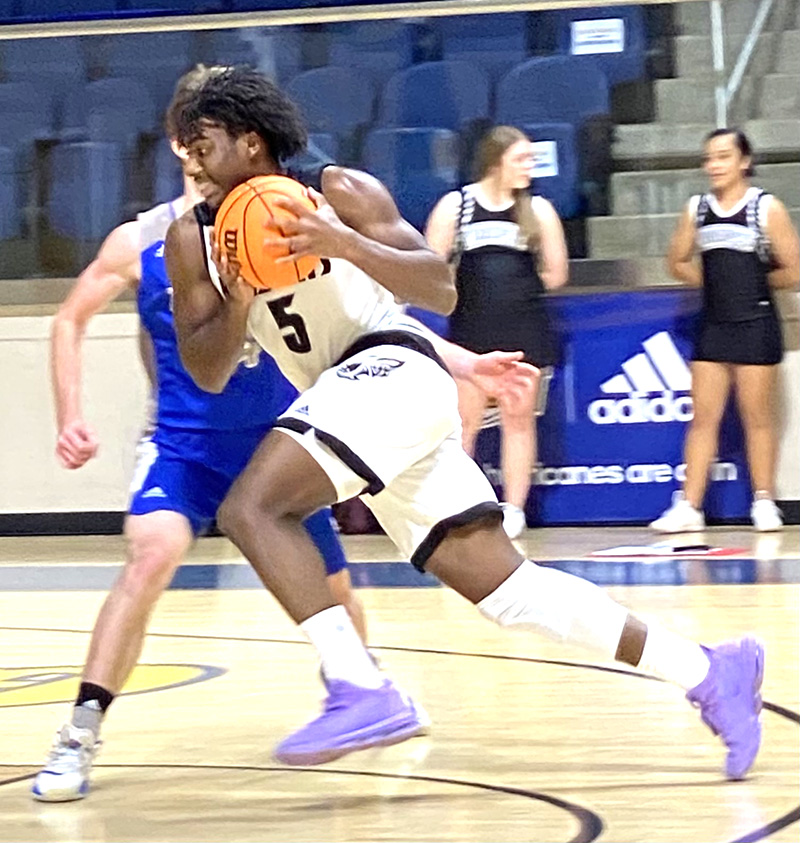 Schley County senior guard Zamon Ross (5) pushes the ball up the court for the Wildcats. Ross scored 12 points in the win over Terrell Academy. Photo by Ken Gustafson

AMERICUS – The Schley County Wildcats (SCHS) were supposed to face off against region rivals Marion County in the GSW Storm Dome on Friday, January 29, but due to COVID-19 issues involving the MC Eagles, the game had to be postponed and the Wildcats were without an opponent. However, a replacement opponent was found in Terrell Academy (TA), making for what ended up being and interesting and competitive GHSA/GISA contest at the dome on Friday night. With about 25 seconds to go in the game, the Wildcats led 36-34 before TA guard Heer Patel attempted a three-pointer. Patel’s shot was off the mark, however, and JaLewis Solomon was able to knock down two free throws with six seconds left to preserve a 38-34 victory for SCHS.

“We played man-to-man defense the entire game, with the exception of three to four minutes of the fourth quarter, when we went to a 3-2 zone, which is usually our patented defense,” said SCHS Head Coach Ernest Scott. “We wanted to see if they (TA) could handle the pressure when we pressed a little bit. We turned them over a little bit, but they are a well-coached team too.” Coach Scott went on to say that the Eagles were able to stay in the ball game at the free throw line. According to the final totals, the Eagles made 12 of 18 foul shots, while the Wildcats went 3 for 5 from the foul line. 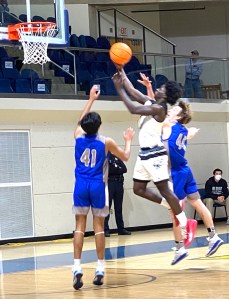 While he was pleased with his club’s defensive effort, Scott knows that there is room for improvement and that there is still a lot of rust from not having been able to play a lot of games.

“We’ve only played six games all year,” said Scott. “That’s tough during the pandemic playing only six games. We’re trying to stay in basketball shape and we’re trying to stay in basketball rhythm. It’s hard to do that when you’re in quarantine for a week, come back and practice for two days and then you’ve got a game. It’s been tough, not only on me and the coaches, but it has been tough on the players too, not knowing if you are going to play the next day. I thought Terrell did a really good job, but at the same time, our kids played extremely hard and I’m proud of them. We didn’t fold up. JaLewis made the free throws at the end this time around. We’ve just got to continue to work and see what happens.” 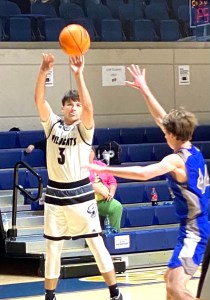 With the win, SCHS improves to 2-4 on the season.

After one half of play, the Wildcats had a 19-16 lead at the intermission and neither team was able to go on a big run in the third quarter. At one point, the Wildcats had a 21-18 lead before Taylor drilled a three pointer to give SCHS a 24-18 lead.

The Eagles quickly responded by going on a 7-0 run to take a 25-24 lead, but the Wildcats fought back by going on an 8-2 run, which was capped off by another three-pointer from Taylor.

However, the Eagles were not going away. They went on a 7-0 run of their own, which was capped off with a go-ahead basket from Thomas McClendon. But Solomon scored with a little less than three minutes to play in the game to tie the score at 34-34. 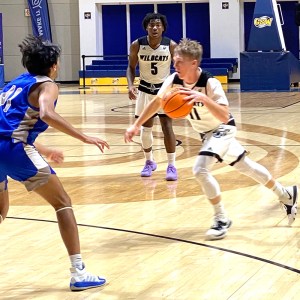 Schley County senior guard Dylan Taylor (11) scored 11 points in the win over Taylor Academy. Six of those points came on two three-pointers in the second half.
Photo by Ken Gustafson

Then with 1:30 to go, Ross was able to penetrate the lane and scored to give SCHS a 36-34 lead. It was now up to the Eagles to respond, which they had been doing throughout the second half.

However, with about 25 seconds left, instead of going for the tying basket, TA senior forward Heer Patel elected to try to give the Eagles the lead on a three-pointer, but his shot was off the mark and the Wildcats would eventually get the ball.

On the final SCHS possession, Solomon was fouled with six seconds left and went to the line to shoot a one-and-one. Solomon made both the front end and the second free throw to secure the victory for the Wildcats.

Nick Chambless led the Eagles in scoring with 12 points and McClendon chipped in 10 in the losing cause.

The Wildcats will step back into region play on Saturday, January 30, when they host Macon County at 2 p.m.