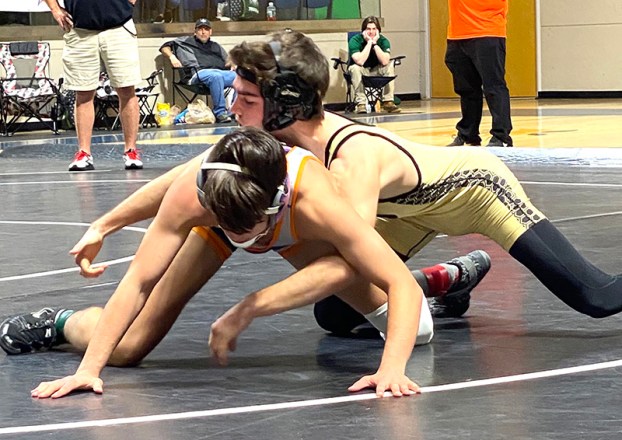 Southland Academy sophomore Tanner Humphrey (yellow) seen here wrestling Antonio Del Vecchio of Valwood in the finals of the 126-lb. Weight Class at the GISA State Wrestling Tournament at the GSW Storm Dome. Humphrey lost to Del Vecchio in the finals, but was the state runner up in his weight class. Photo by Ken Gustafson

AMERICUS – The Southland Academy Wrestling Team (SAR) finished in fourth place in the state, but five Raider wrestlers finished as state runners-up in their various weight classes at the Georgia Independent School Association (GISA) State Wrestling Tournament, which was held at the GSW Storm Dome on Friday and Saturday, February 12-13.

“I felt like we had a good finish,” said SAR Wrestling Coach Mike Smith. “Going through COVID, it was hard to get a lot of practices in and hard to get a lot of matches in. To have an opportunity to come here this weekend and finish with the state championship, I’m really pleased overall that the tournament ran well and it seemed that our team wrestled as hard as they could. I was proud of them.” 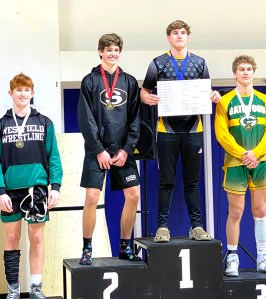 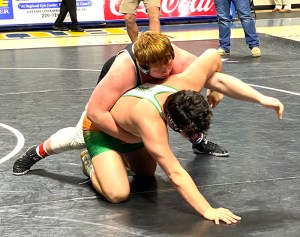 Southland Academy junior wrestler John Saye wrestles Korbett MacGregor of Pinewood Christian Academy in the finals of the 285-lb. Weight Class. MacGregor defeated Saye in the finals, but Saye came away as the state runner up in that weight class.
Photo by Ken Gustafson

In the 126-lb. Weight Class, SAR sophomore Tanner Humphrey worked his way to the finals, but lost in a hard-fought match to Antonio Del Vecchio of Valwood. While he was disappointed in not winning the individual state title, Humphrey was at peace with how he performed, as well as the outcome. “I’m just so glad to be here through all the Corona and everything” said Humphrey. “It’s a blessing to have the opportunity to be at the state tournament and have this. Going into the match, I just trusted in God and whatever His plans were for me. The outcome is not always what you may want, but all according to God and He’s got a plan. I’ve got two more years and I’ll come back and do the best I can.” 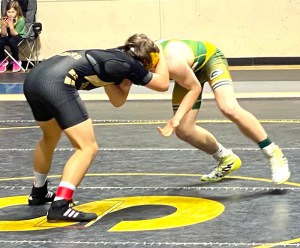 In the 285-lb. Weight Class, SAR junior John Saye fought his way into the state finals and went up against Korbett MacGregor of Pinewood Christian Academy. As the match was coming to a close, it seemed as if Saye was going to prevail, but MacGregor made a move at the end to pin Saye and win the match. “He just got me quick. I wasn’t ready for it,” said Saye. Nevertheless, Saye turned in an outstanding performance at this year’s state tournament and finished as the state runner up in his weight class. 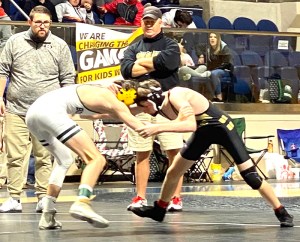 In the 170-lb. Weight Class, junior Cayce Joyner worked his way into the finals and faced Jacob Odom of Crisp Academy, but Odom was able to pin Joyner and come away with the victory. In spite of the loss, Joyner was pleased with how he performed in the tournament overall. “I was pretty happy with the tournament,” said Joyner. “Jacob Odom is a good kid. He’s a good wrestler.” 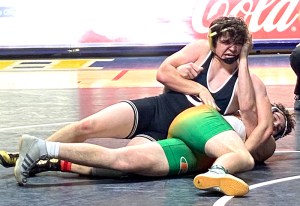 In the 152-lb. Weight Class, SAR senior Colman Fort worked his way into the finals and faced Westfield’s Cole Williams in the championship match. However, Williams was able to come away with the victory and the individual state title. “We were both pretty tired towards the end of it,” said Fort. “I mean, he just happened to out work me a little bit there, but it was a good fight back and forth between us both and I really respect him (Williams) a lot. He’s a good wrestler.” 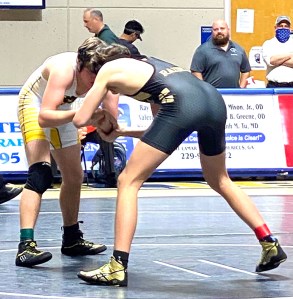 In the 120-lb. Weight Class, SAR eighth grader Ethan Beck fought his way into the finals to face Spencer Sharp of Bulloch Academy. Sharp was able to win the match, but Beck nevertheless finished strong, coming in as the state runner up in that weight class. 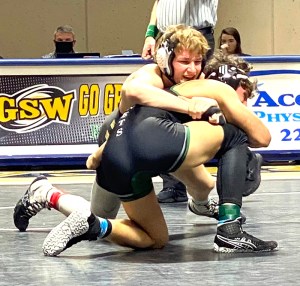 Two other SAR wrestlers turned in solid performances in the tournament. Junior Landon Griffin finished in fourth place in the 138-lb. Weight Class and junior Kolden Kinney finished in fifth place in the 195-lb. Weight Class. Kinney defeated Dylan Williams of Pinewood Christian Academy to secure his fifth place finish. “I had a rough tournament. I had a couple of bad breaks,” said Kinney. “I got down with three losses between yesterday (Friday) and today (Saturday). “I really needed to win that match because it helps my team in the overall scoring. It feels good to actually win something this weekend after working all year.”

THOMASTON, GA – It has been said that it is tough to beat a good team three times in a... read more