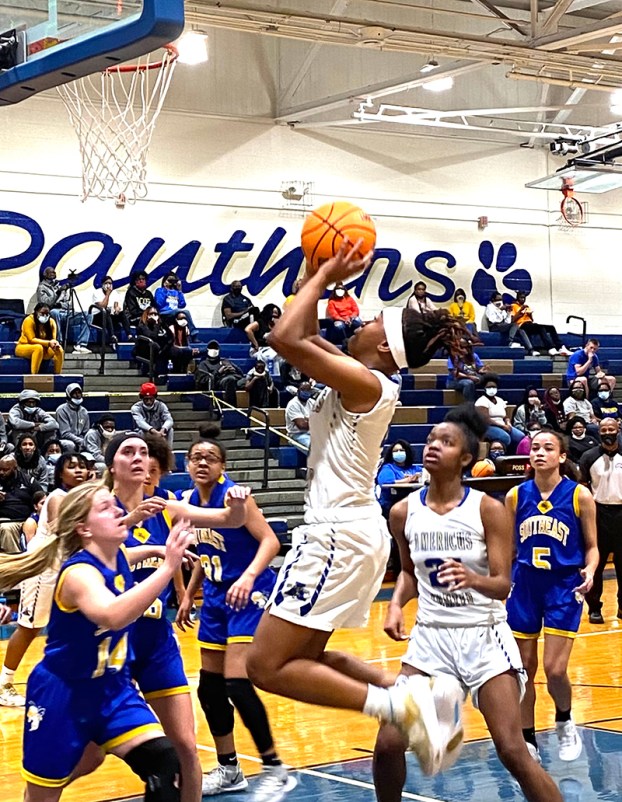 AMERICUS – Late in the third quarter, the Americus-Sumter Lady Panthers (ASHS) only had a five-point lead on the Lady Yellow Jackets of Southeast Bulloch (SEB). However, at that point in the game, ASHS was able to flip the switch. The Lady Panthers (15-4) used their full court press to force turnovers and score points in transition. By doing this, they were able to go on a 10-1 run and took control of the game on their way to a 48-28 victory over SEB in the first round of the GHSA Class AAA State Tournament on Wednesday evening, February 24, at the Panther Den.

While ASHS Head Coach Sherri Harris was pleased with the victory, she was disappointed in her club’s slow start in this game and is very concerned about how her team will perform in the early stages when they face the Lady Razorbacks of Cross Creek (CCHS) in the second round of the GHSA Class AAA State Tournament on Saturday in Augusta.

“I don’t know if it was nervousness. We just came out flat today,” said Harris. “The good thing is we’re at home, so it makes it a lot easier when you’re in your own gym doing that. We can’t go on the road in hostile territory against the #2 team in the state (CCHS) and make those same mistakes, but our defense, it prevailed right here at the end. We were able to get some transition baskets and got going. We were off offensively the whole night….missing a lot of easy baskets, more than the usual. We miss a bunch anyway, but we missed more than the normal amount.”

Aviyonna Clemons led ASHS in scoring with 19 points and both Tiffani Goodman and Trinity Jackson each chipped in nine points in the winning cause. 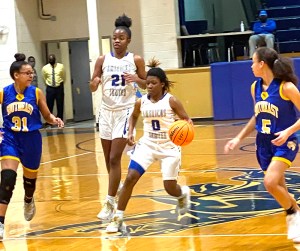 ASHS jumped out to a 4-0 lead to start the game, but struggled to score points over the next couple of minutes until Trinity Jackson scored on a layup to give the Lady Panthers a 6-2 lead.

However, as the first quarter wore on, both teams continued to struggle on offense. 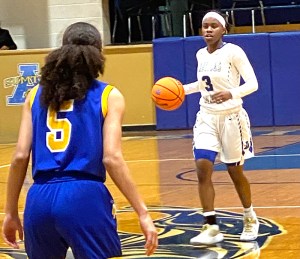 ASHS was able to expand its lead to seven points when Goodman scored on a layup and was fouled with 45 seconds left in the first quarter. Goodman made the foul shot to complete the three-point play and the Lady Panthers had an 11-4 lead.

It took a little over a minute into the third quarter, but ASHS got its first points of the second half on a jump shot from Natasha Jackson. This seemed to jump start the Lady Panthers’ offense as ASHS would later build its lead to 23-13 on a jumper by Kaylin Holley. Over the next couple of minutes, however, SEB outscored the Lady Panthers 5-2, but Destinee Sims knocked down two foul shots with 3:17 left in the third to give ASHS a 27-18 lead. 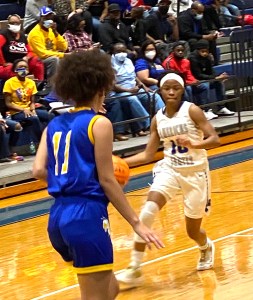 Americus-Sumter junior shooting guard Kaylin Holley (10) scored six points in the Lady Panthers’ 48-28 victory over Southeast Bulloch in the first round of the state tournament.
Photo by Ken Gustafson

However, the Lady Yellow Jackets were not going away. Korine Talkington and Ansleigh Littles drained back-to back three-pointers to put SEB within three at 27-24. Fortunately for ASHS, Goodman was able to respond by sinking two free throws to push the lead back up to five. At this point in the game, it was looking more and more like a game that was going to go down to the wire, which is what most high school state playoff games are expected to be.

However, just as it looked as if the Lady Yellow Jackets were going to give themselves a chance to pull off the upset, the Lady Panthers turned up their defensive pressure and were able to score points off turnovers, which is one of the things they do best. With a little over a minute left in the third quarter, ASHS used its full court press to go on a 10-1 run and took a 37-25 lead going into the final eight minutes. 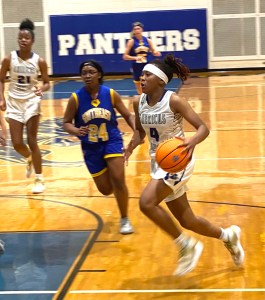 This third quarter run by ASHS seemed to totally take any offensive rhythm out of the Lady Yellow Jackets. Over the first four minutes of the fourth quarter, SEB didn’t score a basket until the 3:55 mark, while the Lady Panthers were able to build up their lead to 15 at 42-27.

For the remainder of the game, the Lady Panthers maintained total control and did not allow SEB to make another serious run.

The Lady Panthers, who won the GHSA Class AAAA state title a year ago, will now focus their attention on trying to topple Cross Creek on Saturday, February 27, at CCHS in Augusta. The Lady Razorbacks (19-2) are ranked #2 in the state in the GHSA Class AAA standings and they defeated Appling County 64-21 in their first round game. Tip off for this second round contest is scheduled for 5 p.m.

Should the Lady Panthers prevail on Saturday, they will play the winner of the game between Sandy Creek and Sonoraville in the state quarterfinals on either Tuesday or Wednesday, March 2 or 3.

AMERICUS – It has been said that to win basketball games, especially in postseason play, you have to do the... read more