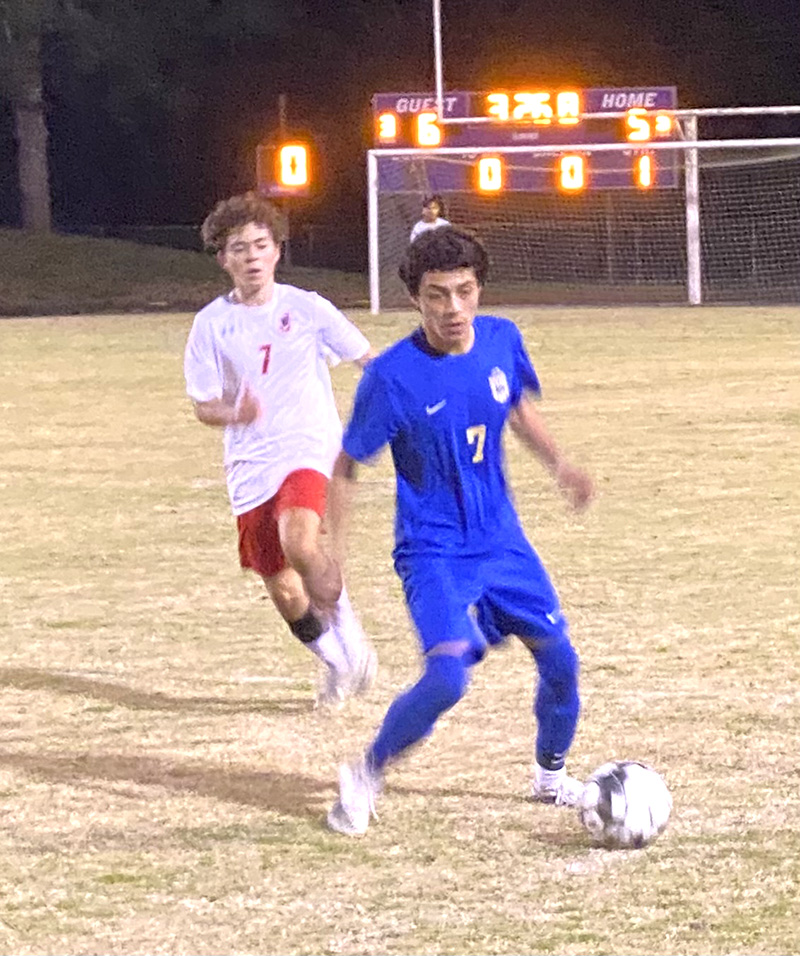 Americus-Sumter junior midfielder Jesus Rodriguez (7) fights off a JHS defender. Rodriguez scored the first of the Panthers’ five goals in their bid for a comeback victory. Photo by Ken Gustafson

AMERICUS – The Americus-Sumter Varsity Boys Soccer Team (ASHS) found itself down 4-0 at halftime to the Red Devils of Jackson (JHS) in its opening game of the 2021 season.  However, ASHS very nearly pulled off a fantastic comeback. The Panthers found away to come up with five goals in the second half and gave themselves a chance to pull of an incredible come-from-behind victory. However, JHS scored two more goals in the second half, which was enough to edge out ASHS 6-5 on Friday, February 26, at Alton Shell Stadium.

“I thought we came out a little slow, but we fought,” said ASHS Head Coach Mike Pepito. “We knew this was a region game. We knew we had to keep the score tight. We made some adjustments at halftime and it seemed to work. We scored five goals to their one, so it was a 4-1 difference on the other side in the second half. I hate it that we lost, but it was a good match and I can’t be disappointed.”

“A lot of times, we weren’t pressing like we should have been pressing. We were just hanging out in space,” said Pepito. “I told the boys, ‘Don’t play their game. Play our game’. Our game is a run and pass offense and so we’re very high attacking, which it shows. We press the ball very fast on the counter. Once we started playing our own game, we started scoring some goals,” Pepito continued.

In the second half, the Panthers found the courage and determination they needed to get back into the match. In the 46th minute, Jesus Rodriquez sent a shot past the JHS goalkeeper for the Panthers’ first goal of the game. The Red Devils responded a couple of minutes later when Zimmerman scored his second goal of the match off another assist from Reyes, giving JHS a 5-1 advantage.

However, ASHS would not go away. The Panthers struck again in the 55th minute when Leo Diaz Lopez was able to corral the ball off a corner kick from Rodriguez and score, cutting the ASHS deficit to 5-2. Then in the 63rd minute, Alexis Vazquez scored the first of his two second half goals to bring the Panthers to within two goals at 5-3. Shortly thereafter, Vazquez struck for goal #2 when he tucked the ball past the JHS goalkeeper. The Panthers, who were down and out at halftime, had come back from the dead and were very much alive for a possible historic come-from-behind victory.

However, the Red Devils would eventually get the deciding goal of the match. In the 64th minute, Lunsford scored his second goal of the match off an assist from McCord. The Panthers didn’t quit, however, as Kevin Abarca scored with a little over 12 minutes left in the match. However, ASHS was not able to get the equalizer and the Red Devils, who had a comfortable 4-0 lead at halftime, were able to escape Americus with a 6-5 victory.

In addition to the second half offensive explosion from ASHS, sophomore goalkeeper Ary Flores came up with some big saves in the second half to keep the Panthers in the game, which allowed for the near comeback.

ASHS (0-1) will try to earn its first win of the season when the team travels up to Thomaston, GA for another Region 2-AAA match against the Knights of Upson-Lee on Friday, March 5. Kick off is scheduled for 5:30 p.m.