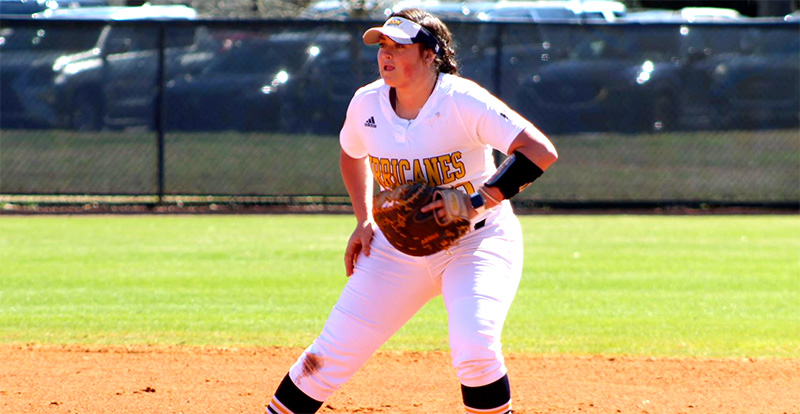 GSW senior infielder Lauren Kuerzi went 4 for 7 with a home run, three RBIs and a run scored to lead the Lady Hurricanes to two straight victories (8-2 and 9-0) over Middle Georgia College State on Saturday afternoon, February 27, in GSW’s home opener at the GSW softball complex. Photo by Christopher Finn

GSW senior infielder Lauren Kuerzi finished the day going 4-for-7 with three RBIs and one run. She also had a solo home run over the left field wall. Freshmen Zoe Willis and Hailey Pinette also hit bombs for the Lady Hurricanes. GSW pitching staff combined for 12 strikeouts on the day.

In Game 1, GSW started their scoring early in the bottom first inning. With two outs and bases loaded, Pinette drew a walk to give GSW a 1-0 lead. Shannon Gibson picked up an RBI in the same fashion, followed by Kuerzi, who hit a two RBI single to as GSW led 4-0.

MGA got on the board in second inning with a sacrifice fly that plated their first run of the day. MGA started the top of the fourth inning with a home run into center field but GSW (6-1) returned the favor with a Kuerzi home run to open the bottom fourth.

Willis, who also pitched, followed suit as she hit a two RBI home run over the right field wall in the bottom of the fifth inning. Chloe Zoeller finished the game with a sacrifice bunt in the bottom of the sixth inning as GSW won, 8-2. Willis picked up her second career win, throwing six strikeouts while only giving up four hits in 7.0 innings pitched.

Game 2 ended fairly quickly for the Lady Hurricanes, as Gibson picked up the shutout. With Willis on third base and one out, Chelsea McGuff hit the perfect bunt and picked up an RBI to take a 1-0 lead. One batter later, Zoeller hit a two RBI double into the left field. Kayla Kerr came up to bat with bases loaded and singled right down the left line to plate Zoeller as GSW led 4-0.

GSW picked up four more runs in the third inning also. With two outs, Allyson Murdock hit a double to plate McGuff followed by Zoeller, who dropped a RBI single right into center field. While MGA (3-7) changed pitchers, GSW continued to get hits. Katelyn Wood picked up a two RBI double to push the score to 8-0. Pinette’s home run came in the bottom of the fifth inning as it was slightly out of reach for MGA, pushing them to a 9-0 win. Gibson, who picked up her first win of the season, shared the circle with Ansley Dean as they combined for six strikeouts.

The Lady Hurricanes will host Point University in a midweek match on Wednesday, March 3. Game one of the doubleheader starts at 3 p.m.