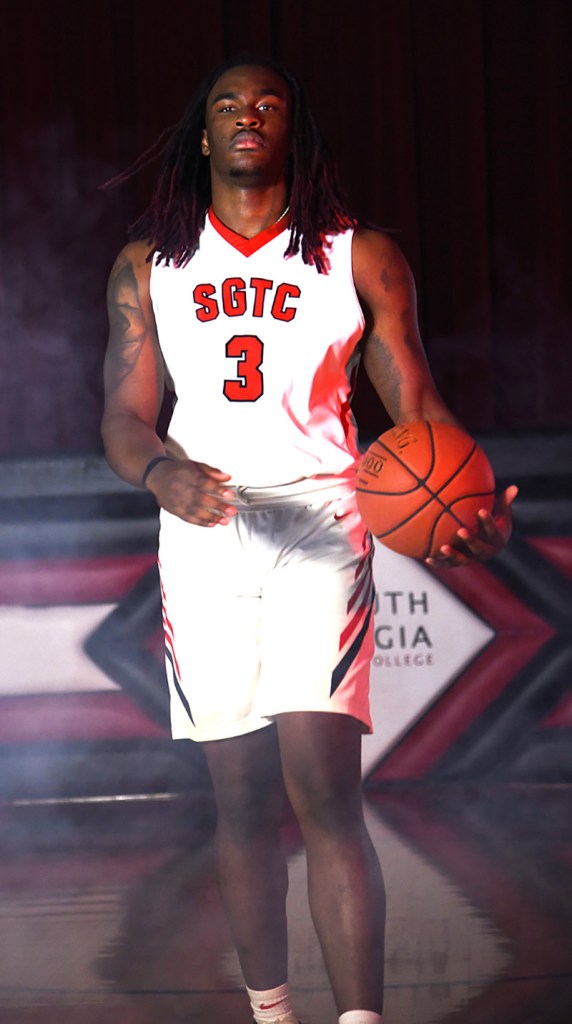 SGTC sophomore forward Jalen Reynolds (3) was the top scorer for the Jets Tuesday night in their loss to Albany Tech. Photo by Su Ann Bird

ALBANY – The South Georgia Technical College (SGTC) Jets dropped a narrow 70 – 66 decision to Albany Tech Tuesday in Albany to fall from first place in the Georgia Collegiate Athletic Association (GCAA) standings into a three-way tie for second place with South Georgia State College and Albany Tech.  The Jets are now 8 – 3 in the GCAA and 10 – 7 overall.

“We struggled to make plays last night,” said SGTC interim Jets head coach Chris Ballauer.  “Hats off to Albany Technical College.  They had a good game plan and executive it well.  We had our chances but couldn’t capitalize on them.  We will get back to work today and get prepared for them again here on Thursday.  There is still a lot to play for and anything can happen.”

Sophomore forward Jalen Reynolds led the Jets in points and rebounds.  He had a double-double night with 23 points and 16 rebounds.  He also had three assists, two blocked shots and two steals.  Freshman guard Marvin McGhee was closed behind with 17 points, eight rebounds, and two assists.  The only other member of the Jets to score in double figures was freshman guard Will Johnson with 10 points, eight rebounds, eight assists and one steal.

Kadeem Wilks came off the bench to toss in six points for the Jets.  Matija Milivojevic scored four points but had 10 rebounds on the night and then Jordan Stephens, Brandon Avant, and Keundre Campbell closed out the scoring with two points each.

The Jets shot 40% from the field and only 33% from the three-point line.  They only shot 9 free throws on the night and converted five of them for a 55% success rate.

The Jets will face Albany Tech in a rematch in Americus on Thursday at 7 p.m. in the hangar and then will also take part in a double-header with the Lady Jets on Saturday for Sophomore Day. The college will recognize the Jets and Lady Jets sophomores around 3 p.m. prior to the start of the Jets men’s game against Gordon College at 4 p.m.  The Lady Jets kick off the day with a 1 p.m. game against East Georgia.