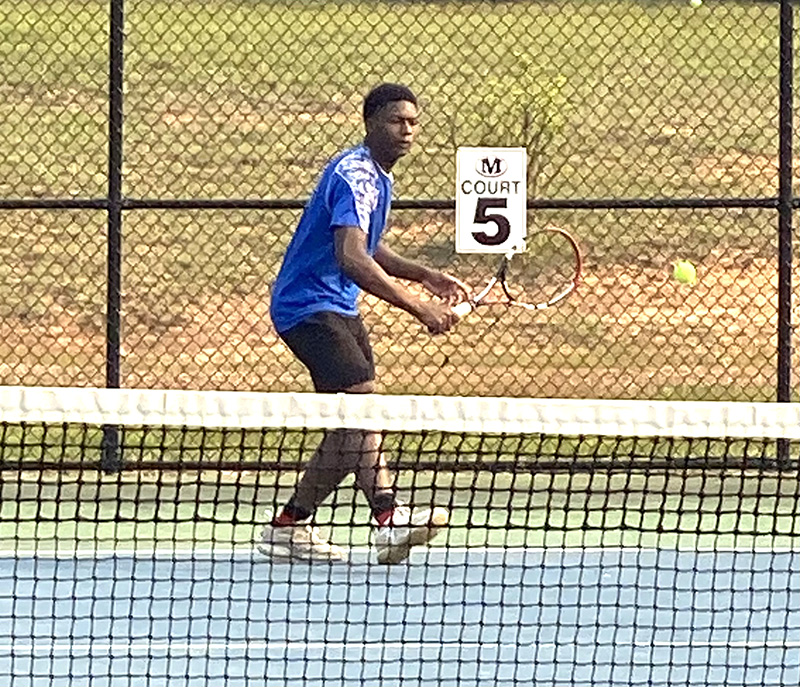 Americus-Sumter #2 singles player Keldrick Flemming was able to win a hard-fought match against Marion County’s Taylor Jack Kirksey 4-7, 7-4, 13-11 to help the Panthers earn a 4-1 team victory over the Eagles. Photo by Ken Gustafson

The Lady Panthers’ Teigan Pepito struggled in her match against MC’s Maddie Taylor and lost in straight sets 0-6, 0-6. However, Rebecca Ingle was able to come up with a win for ASHS by defeating Sammi Frances in straight sets 6-3, 6-0. Alecia Holmes of ASHS was hoping to do the same to her opponent, Alexis Rennie, but lost in two hard-fought sets 5-7, 5-7. At that point, the Lady Panthers trailed the team match 2-1. 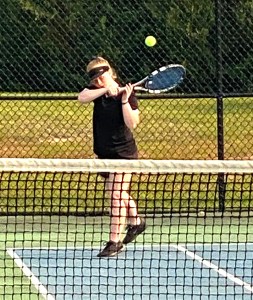 Americus-Sumter #2 singles player Rebecca Ingle defeated MC’s Sammi Frances in straight sets 6-3, 6-0 to help give the Lady Panthers’ a crucial win that would lead toward a 3-2 team victory over the Lady Eagles of Marion County.
Photo by Ken Gustafson

On the boys’ side, the Panthers won the team match 4-1, but it wasn’t as easy as the final team score might indicate. The Panthers’ #1 player, Zach Johnson, lost in straight sets to Kenyon King 3-6, 2-6. However, ASHS was able to get a key, hard-fought victory from Keldrick Flemming. The ASHS senior lost the first set to Taylor Jack Kirksey in a tiebreaker 4-7, but was able to win the second set in a tiebreaker 7-4. This set the stage for an exciting deciding third set that was even more back and forth than the previous two. Fortunately for Flemming and the Panthers, he was able to come away with a 13-11 victory in the third set to win his match and earn an important point for the Panthers. 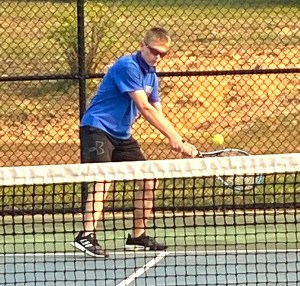 Americus-Sumter doubles player Griffin Toms is seen here returning a serve. He and his doubles partner, Corey Wright, won their doubles match by way of a forfeit, but they went ahead and played a practice match.
Photo by Ken Gustafson

The ASHS #3 player, Jeremy Bembrey, won his match via forfeit. That made it 2-1 in favor of ASHS, with two more doubles matches to decide the outcome.

The #1 ASHS doubles team of James Schopen Davis and James Ndaayezwi was able to defeat the MC duo of Anthony Titow and Will Howard in straight sets 6-1, 6-2 to clinch the team match for the Panthers. The ASHs team of Corey Wright and Griffin Toms ended up winning their match via forfeit to give the Panthers a 4-1 team victory.

Both ASHS teams will close out the regular season at home on Wednesday, April 7 against Shaw High School.