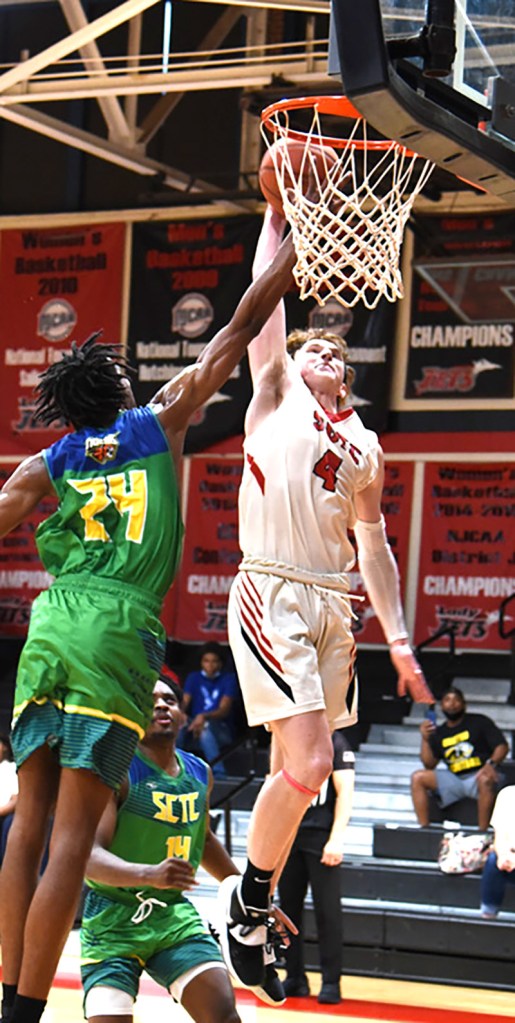 GCAA Freshman of the Year Will Johnston led the Jets in scoring with 18 points against Southern Crescent in the NJCAA Region 17 quarterfinals. Photo by Su Ann Bird

AMERICUS – The South Georgia Technical College (SGTC) Jets came from behind with the help of Georgia Collegiate Athletic Association (GCAA) Player of the Year Jalen Reynolds and Freshman of the Year Will Johnson to take a narrow 69 – 64 win over the Southern Crescent Tigers in the National Junior College Athletic Association (NJCAA) Region 17 tournament quarterfinals.

The victory will allow the third seeded SGTC Jets to advance to the NJCAA Region 17 semifinal round that will be played in Waycross on Friday, April 9.   The tournament was originally scheduled to be held in Rome at the home of the top-ranked Georgia Highlands Chargers.  However, the Chargers lost to the eighth seeded East Georgia State College Bobcats, coached by former SGTC head coach Travis Garrett, in the quarterfinal round Tuesday night. East Georgia upset Georgia Highlands 93 – 87 to earn the right to advance to the semi-finals.  The loss by Georgia Highlands also allowed South Georgia State to host the semi-finals and finals as the remaining top-ranked team in the tournament.

SGTC will travel to Waycross to play South Georgia State at 7 p.m. Friday, April 9.  South Georgia State defeated the seventh-ranked Gordon College squad 67 – 61 in their quarterfinal match-up.  In the other quarterfinals contest, Central Georgia Tech upset Albany Tech 67 – 64 in overtime to advance to the NJCAA semi-final round.  They will match-up with East Georgia at 5 p.m. on Friday, April 9.

“We knew it was going to be a tough game,” said SGTC Jets interim head coach Chris Ballauer.  “Southern Crescent’s Coach Sinkfield does a great job of getting his players to play hard for 40 minutes.  It was not one of our best shooting nights but we made some big shots in the second half and that was the difference.”

In the second half, the Jets scored 43 points while holding Southern Crescent to 32 points to secure the 68 – 64 victory.  That effort was led by GCAA Freshman of the Year Will Johnson who turned two first half points into 18 to lead the Jets in scoring.  He also had three assists, one rebound, and six steals on the night.

GCAA Player of the Year Jalen Reynolds scored a total of 14 points with 11 in the second half.  He also led his team in rebounds with 10 on the night.  Marvin McGhee and Jordan Stephens both ended the night with nine points each, Tabais Long contributed eight points, Matija Milivojevic 5, Nikola Sasaroga, 4, and Keundre Campbell, 2.

The Jets have faced South Georgia State twice the season and taken wins both times.  The Jets won 91-76 in Waycross and 87 – 77 in Americus.  “Those were two really good games,” said Chris Ballauer.  “We played and shot the ball well, but it is tough to beat a team three times.  We have to take care of business on Friday night to advance and have a shot at winning the NJCAA Region 17 tournament.”

If the Jets advance to the finals, it would feature former coaches of South Georgia Tech against the current coach.  Former SGTC Assistant Coach Reco Dawson is the head coach of Central Georgia Tech and Travis Garrett, former head coach of the Jets, is now coaching East Georgia State.  The finals will be held on Saturday, April 10 at 4 p.m.

“I think a match-up against Coach Garrett or Coach Dawson would be awesome,” said Ballauer.  “Coach Garrett taught me a lot the last four years.  The competitor in me would like to see that game, but we have to get there first.”  The Jets beat Central Georgia Tech twice this season (64-56 and 74 -60) and split with East Georgia (lost 85 – 83 and won 71-66).

Schley County edges out Cook County thanks in part…