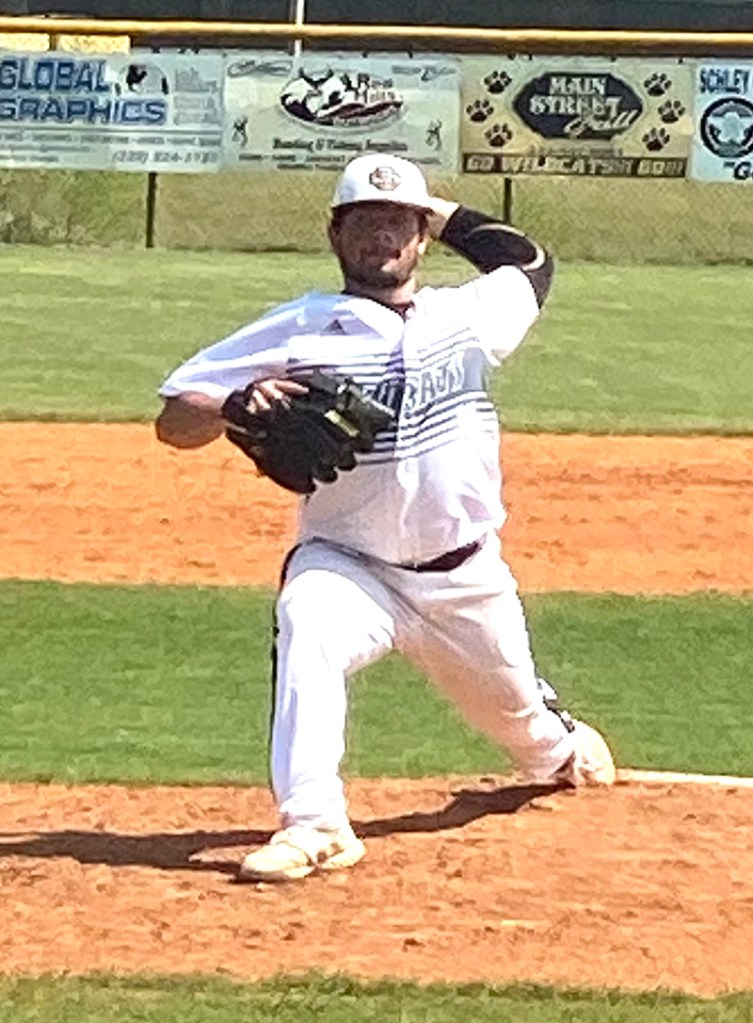 Schley County starting pitcher Ridge James gave up three runs on five hits, walked one batter and struck out another to help lead the Wildcats to a 5-3 win over Cook County. Photo by Ken Gustafson

ELLAVILLE, GA – It wasn’t the prettiest of games played by the Wildcats, but SCHS Head Coach Chuck Cheek and his squad will take it. Despite giving up three runs to Cook County (CC) on five errors in the top of the sixth inning, the Schley County Wildcats were able to hang on for a 5-3 win over the Hornets on Wednesday, April 6 at Schley County High School (SCHS).

“It was a sloppy game by both teams. There was a lot of run giving,” said Cheek. “They (CC) gave us some runs early. We gave them some runs late. I think we would be a lot happier if we had played much cleaner defense.”

Unofficially, the Wildcats committed a total of nine errors in this game and were only able to come up with three hits against five different CC pitchers.

“”We didn’t hit the ball like we did at Lee County,” said Cheek. “Part of that is the fact that they threw five or six different pitchers. It’s kind of hard to get timing on somebody when you only get to see them one time. That’s part of it. Ridge (James) did a great job on the mound. Owen (Lamb) came in and did another great job for us.”

James started the game on the hill for the Wildcats. In a little over five innings of work, he gave up three runs on five hits, walked one and struck out one. Lamb came on in relief of James. He pitched one scoreless inning and struck out two CC batters, while allowing no hits. 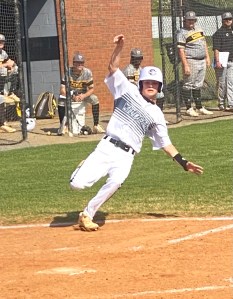 Schley County catcher Trypp Lumpkin is about to slide home safely and score the Wildcats’ fifth and final run of the game. Lumpkin also went 2 for 3 at the plate, including a two-run single in the second inning, to help lead SCHS to victory.
Photo by Ken Gustafson

According to Cheek, one of the keys to the outcome of the game was his team’s aggressive base running. “We ran the bases well. We stole some bags and got some guys in scoring position and got them in,” said Cheek. “They (CC) are a good team and we don’t take any wins for granted. We just have to clean some things up defensively.”

Trypp Lumpkin led the Wildcats offensively by going 2 for 3 at the plate with two singles and two RBIs. Both of his RBIs came in the second inning on a two-run single, which proved to be the difference in the game.

With the win, SCHS improves to 16-5 on the season. Weather permitting, the Wildcats will play Deerfield-Windsor in Albany on Friday, April 9 at 5 p.m. Their next home game, weather permitting, will be on Saturday, April 10 against Westfield at 4 p.m.