Hands Of Hope is more vibrant and alive than ever 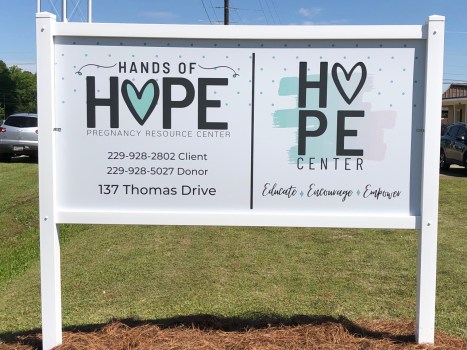 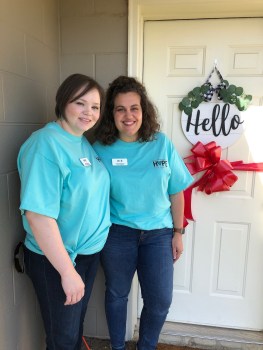 By June B. Anderson

It was my honor to attend the ribbon cutting and building dedication for the new Hands of Hope Pregnancy Resource Center, (HOHPRC) lovingly known as “Hope Center,” on Thomas Drive here in Americus on Saturday, April 17, 2021, at 10:30 a.m.  The weatherman had called for a dreary day fraught with clouds and rain and unseasonably cool temperatures.  Not my favorite kind of weather so I dressed appropriately.  However, upon my arrival not only were the skies particularly blue and dry, but the temperature and wind were calm, and this was not the end of the pleasantries.

Volunteers and employees of Hope Center dressed in t-shirts of a lovely aqua hue were milling around, chatting, and awaiting the arrival of the attendees.  Hubby and I like to be early for these sorts of events, so we were among the first to arrive.  A stage was set up in the backyard for the speakers and musicians and soon the celebration began.

Jay Anderson, chairman of the board of directors, opened the festivities with a bit of history and “how we got to this place,” explaining that when Kym Carter was director, she had a vision for a more modern and larger facility than the one they had previously occupied downtown, a vision of a place where they would have a sonogram machine and volunteers to help them “go medical,” so that more services could be rendered to their clients.  It had been a fine place but had become too small for their needs and a new place had been prayerfully sought.  It was discovered that a building on Thomas Drive that had formerly housed a law office was for sale…for $130,000.  Hope Center operates mainly on donations, so this kind of funding was out of the question, they thought.

The board met to consider their course and Jimmie Chapman, board member and former chairman, suggested they apply for a grant from the Georgia Baptist Health Care Ministry Foundation.  The next question was, “How much should we ask for?  A down payment?  Dare we ask for half the funding?”  Jay said that Jimmie’s eyes began to twinkle and they knew they had to pray for God’s direction and what His desire was for them…the whole funding.  They only had a short time to get the grant in or they would have to wait another year.  The deadline was met and God proved to them that what He was instructing was what they had suspected.  They applied for…and received…the entire $130,000!  Unbelievable!  But that’s how God sometimes works.  He loves to surprise His children!  What a blessing it was and how grateful Hope Center is that God used that organization in such an important and meaningful way!  Jay thanked Kym and Jimmie for their faithfulness to Hope Center in the past and expressed gratitude for their support now and in the future.

Jay introduced Amanda Anderson, co-director of the HOHPRC, and she also spoke of Kym’s longtime vision for a place like the one they now have.  Amanda was then working part-time at the HOHPRC.  The vision was contagious and the board began praying and moving as they saw God direct.  During the time of seeking God, Amanda heard a song, “Make Room,” that would not leave her alone.  Some of the lyrics that spoke to her most were:  “I’ll make room for You to do whatever You want to.  Here is where I lay it down, every lie and every doubt.”  She wanted to give herself fully over to God to use her there according to His will, and she wanted their clients to understand that they can “lay down every lie and every doubt” that has been spoken over them.

Amanda talked with her friend Jessica Woolsey, who had been a previous director of Hope Center here, and she agreed to enter into a co-directorship with Amanda.  Each has strengths and weaknesses that the other doesn’t have, so they knew they would mesh well.  The words of the song spoke to them that they should work through all the struggles and doubt and let God bring to fruition this thing that was bigger than the two of them.  Amanda became Center Director and Jessica became Client Program Director.

After Amanda spoke, Stacy Brown and Lane King took the stage and performed the song “Make Room” that had been so important in bringing Hope Center to its current state.  Board member Chris Yarber led in a prayer, then Jessica introduced the ribbon cutting and gave directions for touring the building, something I had awaited with bated breath!  She offered light snacks and announced that those lovely aqua t-shirts were for sale for $18 along with cookies that could be obtained for any donation.

Stacy and Lane took the stage again and provided more lovely music as we entered the building for the tour.  How spacious and welcoming it was!  So warm and inviting.  Many of the walls held pictures and phrases of encouragement to all who will enter for help.  The volunteers and board members as well as Amanda and Jessica were available for questions and discussion and made us all feel very welcome…and VERY glad we support a work of this caliber.  Needless to say, I was impressed.  A big THANK YOU to everyone involved in serving this place.

Hope Center exists to come to the aid of girls and women who find themselves in a crisis or unplanned pregnancy.  They are keenly aware that men and families involved sometimes need help or guidance, and they are available for this service, too.  While the volunteers for the girls and women are females, there are male volunteers who are more than willing to help the men involved.  So many services and help are available, too many to name here, but some of them are with decision making, parenting, obtaining baby needs, and much more.  The clients receive baby items free of charge with points they have earned by taking certain steps such as keeping doctor’s appointments, completing classes in their “Earn While You Learn” program, and a number of other related tasks. Hope Center looks at their work as a hand up, not a hand out, and they operate in a non-judgmental and compassionate manner.

Hands of Hope provides services for seven area counties:  Macon, Marion, Schley, Stewart, Sumter, Taylor, and Webster.  You may desire to give monetarily to this vital organization, or you may want to help by volunteering.  Maybe you just want to know more about this organization.  You may obtain more information about Hope Center at their website:  www.americuspregnancy.org or you may call them at 229-928-2802.  There is a new volunteer training set for May 7 if you or someone you know is interested in helping Hands of Hope with their clients’ needs.  Contact them for the particulars regarding that.  Their greatest need is your prayers for them and for Hope Center.

God bless this ministry and the people involved!  What a service you provide to this area!