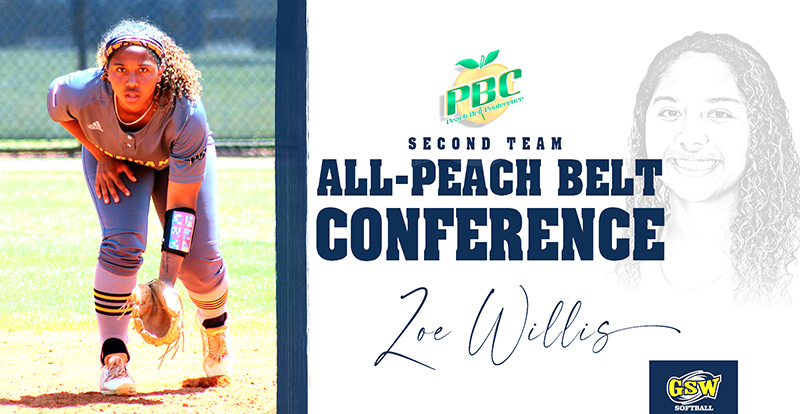 GSW freshman second baseman/utility player Zoe Wills has been named to the PBC All-Conference Second Team for her performance during the 2021 season. Photo by Christopher Finn

The Pine Mountain, GA native led the Lady Hurricanes with a .343 batting average while starting all 36 games this season. She also led the team with 35 hits and 25 runs while finishing with a .578 slugging percentage and .455 on base percentage, which are both team highs. Wills also finished the season in second with 27 RBIs, six doubles and six home runs.

Inside the circle, Willis led the Lady Hurricanes with seven wins and 77 strikeouts in 18 appearances while getting 14 starts on the season. She was second on the team pitching 79.1 innings with a 4.85 ERA. In the PBC, and was seventh with 24 strikeouts looking, eighth in strikeouts while finishing ninth in wins and on base percentage.

Defensively, Wills finished with a .973 fielding percentage and had 75 total chances with 28 putouts while getting 45 assists.

The 2021 softball All-Conference team was selected by the league’s head coaches. Coaches were not permitted to vote for their own players.