Why did the Callaway House cross the street? 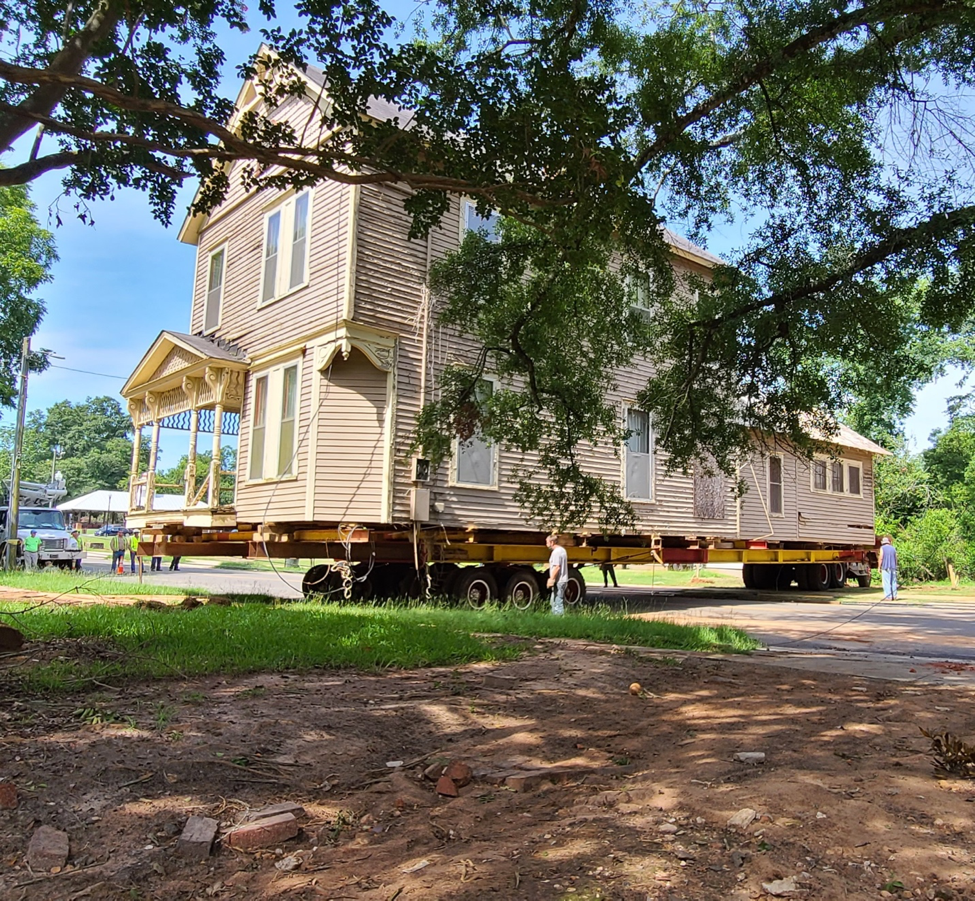 Most Historic Preservation Commission (HPC) meetings in Americus are noncontroversial. A homeowner wants a porch railing or a businessperson wants a new sign. It was surprising then to see an application in January 2020 to raze the two-story house at 312 S. Jackson Street. The First Baptist Church requested permission to “tear down [the] house, remove all debris, grade to allow mowing easily, [and] plant grass seed to become ‘green space.’” The HPC deferred its decision and asked the church to place an advertisement in the Americus Times-Recorder to the effect of “free house, buyer must pick up.”

It took more than a year, but this spring and summer a moving team jacked up the house, placed it on steel beams, and towed the building across Jackson Street. Preservationist Charles Crisp, a preservation commissioner and a board member of the Sumter Historic Trust, coordinated the effort. He tells me that moving a 200-ton house is neither cheap nor easy. It takes time, coordination, dry weather, and a small armada of utility vehicles. In this case it also required negotiation between the HPC, the First Baptist Church, and the Sumter Historic Trust, the new owner of the house. The Trust, a nonprofit organization that seeks to “preserve and promote the history of Sumter County, Georgia,” intends to sell the house to a preservation-minded buyer. 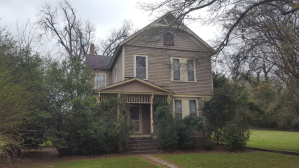 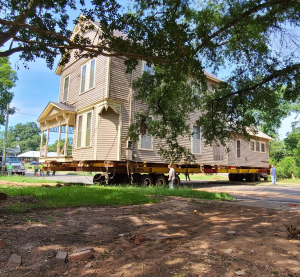 Naming a house is a subjective practice. Should it be called by its first residents (the Callaway family)? Perhaps the name should reflect the longest residents (the Lester-Suggs family) or the “most important” resident. Should it be named after a person at all? Who decides is also murky. Most often house names reflect an informal agreement between community members about what makes it important. There is also a preservation value in attaching a name to a building because a name humanizes and individualizes an “it.” In this way, the act of naming is more important than the name itself. When I learned of its proposed demolition, I began referring to it as the Callaway house.

The Callaway house is locally significant for architecture and for its connection with local attorney and merchant Merrel Callaway. It is a gabled-ell building with Queen Anne details and this reflects a local and national architectural trend in the late-nineteenth century. The building’s prominent features—delicate columns on its small, wrap-around porch, exposed ornamental beams, and wooden shingles—were all common to the era and the city. Built in 1889, it is one of the many homes that gives Americus its sense of place as a Victorian boomtown.

Merrel Callaway, born in 1843, came from a slaveholding family with connections to Wilkes, Dougherty, and Mitchell counties. In 1862, he served six months as a 2nd Lieutenant in the Confederate army, but he sat out the rest of the war and does not have a military headstone. His father also served a short time in the Georgia militia, but his civilian involvement was more significant: he rented out the people he kept in slavery to the Confederate government. In January and February 1864, as enslaved African Americans constructed a prison near Andersonville, the Callaway family leased eight enslaved carpenters to the Confederate government. Their names and places of work are not currently known. It is possible that they worked at Andersonville.

Callaway did not call Americus home until shortly after the Civil War. He established the Americus Recorder—a predecessor of the Americus Times-Recorder—in 1879. Although Merrel and Ann Katherine “Kate” Furlow Callaway lived in multiple homes over the decades, the house on Jackson street became their longest abode. In 1904, The Times-Recorder reported on the wedding of Mirvin Callaway and Joseph Irvine. “The entire lower floor of the Callaway home was [open] and artistically decorated with ferns, southern smilax, and palms,” the Times-Recorder stated. “The decorations [in the front parlor] as throughout the house were very beautiful, many lights shedding a soft glow over all.”

Merrel and Kate Callaway moved to Atlanta about 1910. The house changed ownership and over the next decade a new address system turned 222 Jackson. into 312 S. Jackson. By the 1920s, a new family—the Lester family—called the place home. The house stayed in the Lester and, through marriage, Suggs family, for ninety years. William Thomas Suggs, the last of the Lester-Suggs family to live there, died in 2008 at the age of 92. The house has outlived not only all of its previous owners but also its second address. It became 315 S. Jackson Street when it got to the other side of the street.

The most stringent preservation laws come not from the state or federal government but from the local government. The National Historic Preservation Act (1966) places restrictions on federal “undertakings” that affect historic properties. Legislators sought to protect historic places from projects, such as the interstate highway system, that receive federal funding or require permission from a federal agency. A homeowner can put their 1889 Queen Anne house on the National Register of Historic Places one year and demolish it the next.

Local ordinances, in contrast to the National Register, have greater enforcement “teeth.” Think of these laws like a local-government version of a homeowner’s association. City officials in Charleston, South Carolina, pioneered these laws in the 1930s with the first historic zoning ordinance in the United States. That city created a historic district and a Board of Architectural Review with the power to approve or reject exterior alterations, including demolition and new construction. Since the Great Depression, the number of cities with preservation ordinances has increased to more than 2,300. Georgia, which has 154 cities or counties with preservation ordinances, witnessed most of this growth in the last two decades of the twentieth century. Americus became one of these cities in the spring of 1986.

As established by city ordinance, the HPC consists of seven volunteers appointed by the mayor and ratified by city council. They are responsible for keeping an inventory of historic properties, granting or denying certain changes to historic properties, offering public programing, and seeking public and private funding for preservation initiatives. For all certificates of appropriateness, the HPC is required to judge whether a “material change in the appearance” will or will not “have a substantial adverse effect on the aesthetic, historic, or architectural significance and value of the historic property or landmark or the historic district.” When proposals call for the demolition or relocation of historic properties, the commission must hold public hearings and take post-demolition/relocation plans into consideration.

The HPC in Americus, compared to some other preservation commissions, is notable for its pragmatism. Perhaps this reflects a degree of humility about the difficulties of rural, small-town preservation. After all, if voters consider a commission member burdensome, they might ask the mayor and council for a replacement. In a more extreme case, voters might seek the repeal of the entire preservation ordinance. Preservation commissions and ordinances, as with so many other aspects of our local, state and national government, function best with widespread confidence that decisions rendered are fair and in the public good.

Pragmatism also has costs. Moving a historic building means losing some of its historic integrity. In an ideal preservation scenario, the First Baptist Church would not have purchased an adjacent historic property for the purpose of demolition. The Callaway house might have been rehabilitated where it stood for 130 years. The preservation challenge here is not unique to this church or this city. Over the last century, growing churches required building extensions and more parking and this put pressure on their neighborhoods. When I first posted pictures of the Callaway House on social media in the spring of 2020, I relayed the message that it was endangered. A local friend, who has watched the loss of historic properties over the decades, asked, “Is it another church victim?”

The HPC permitted the Callaway House to cross the street because preservationists here must be pragmatic. The house survived a planned demolition thanks to the cooperation between the First Baptist Church, the HPC, the Sumter Historic Trust, and a bit of creative thinking. Every request to demolish a house is a little bit different, and there have been many lost properties over the years in this community by approved demolitions. The Calloway house, however, is a preservation success that exemplifies the challenges of saving historic properties in rural America.