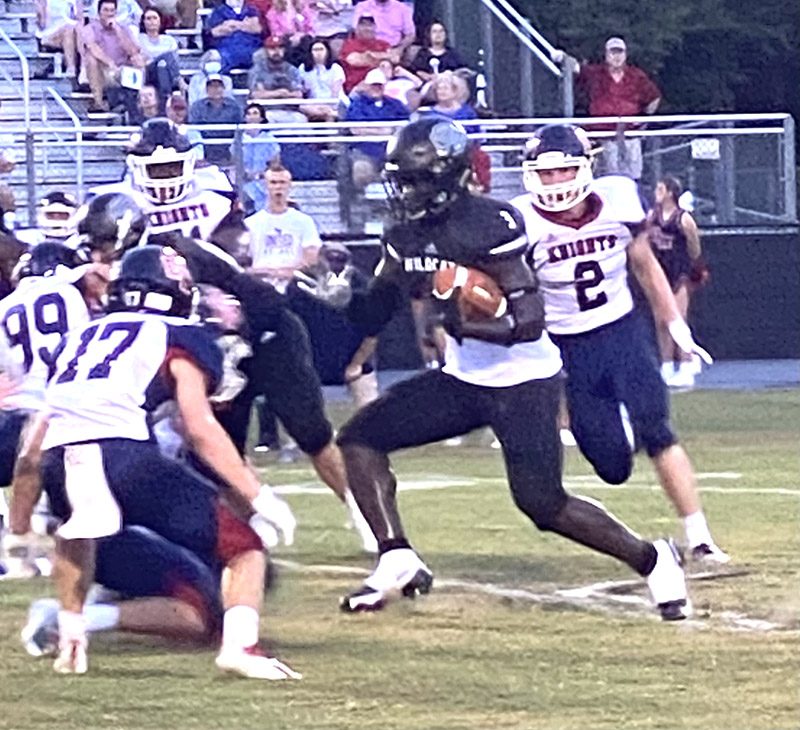 Schley County running back Zayden Walker rushed for 174 yards on 12 carries and scored two rushing touchdowns to lead the Wildcats to a 35-0 rout of Deerfield-Windsor to open the 2021 season. Photo by Ken Gustafson

ELLAVILLE –The Schley County defense set the tone in he Wildcats’ season opener against Deerfield-Windsor (DWS). On two separate occasions, DWS had the ball inside the SCHS 10-yard line, but on both occasions, the Wildcat defense denied the Knights the end zone on all four tries. Those two goal line stands by SCHS proved to be a backbreaker to DWS and they seemed to inspire the Wildcats on offense. As a result, SCHS was able to take control of the game the rest of the way and went on to rout the Knights 35-0 on Friday, August 20 at Wildcat Stadium.

“I’m very pleased with the defensive effort that we had tonight,” SCHS Head Coach Darren Alford said. “I felt like they came to play. I challenged them earlier in the week because the week before against Irwin County, we had a few holes on the inside, but of course, it was Irwin County that we were playing. I challenged them to get better up front: the front three guys and I’m really, really proud of all the guys that we rotated on the defensive line. Coach Greg Smith has done a great job with those guys in the last week and a half trying to get them better up there and we did a lot better job tonight there.” Alford went on to say that he was also pleased with the speed of play of the secondary and the outside linebackers in this game.  “When you play defense that fast, it really causes a lot of problems on the offensive side of the football,” Alford said. “Deerfield really struggled to get things going because as soon as the ball was there, they had something they had to deal with and I’m proud of Coach Peavy, Coach Dupree and Coach Smith. They did a great job on the defensive side.” 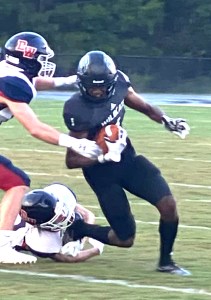 As far as the offense was concerned, Coach Alford stated that though the offense did some really good things in this game, they just could not get out of their own way and hurt themselves with several self-inflicted penalties. “We’d move the ball 20 yards and then we’d back up five. Then we’d move it 25 yards and back up 15,” Alford said. “It was a night where we couldn’t get any consistency on the offensive side of the ball. I just want us to get a little more crisp and a little bit better on that side.”

Neither team could move the football very well on their first offensive possessions of the game, as both offenses hurt themselves with illegal shift penalties. However, the Wildcat offense got the break that it needed with eight minutes to go in the first quarter. As the Knights were about to punt the ball away, the ball was snapped over the punter’s head and it was recovered by the Wildcats at the DWS four-yard line. 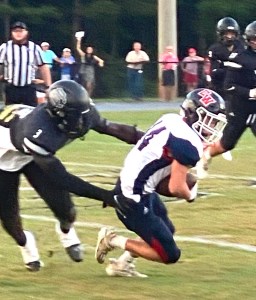 Then on first and goal, SCHS was able to cash in as running back Zayden Walker scored from four yards out. The extra point by Javier Lopez was good and the Wildcats had a 7-0 lead with 7:34 to go in the first quarter.

The Wildcat defense continued to stifle the Knights’ offense, but the SCHS offense continued to struggle putting together drives in the first quarter. This was mostly because of self-inflicted penalties. SCHS thought they were going to catch another break on special teams when DWS punt returner Boles Middleton fumbled the ball. The ball was recovered by Carson Westbrook of SCHS deep in DWS territory, but the referees ruled that Middleton was down by contact before he fumbled the ball, to the irate consternation of the SCHS sideline. Nevertheless, the Wildcat defense once again was able to stop DWS on its offensive possession and the Knights were forced to punt. 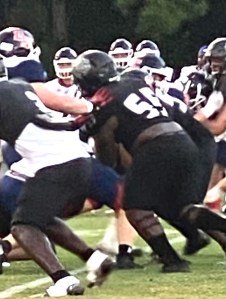 On the Wildcats’ next possession, they were able to move the ball down to the DWS 31-yard line. Then on first and 10, SCHS quarterback Jay Kanazawa threw a 31-yard touchdown pass to Clinton Jackson. Lopez’s extra point was up and good and SCHS had doubled its lead to 14-0 with 11:34 left in the first half.

Later on in the second quarter, the Knights created a golden opportunity to score when Kanazawa tried a backwards pass that was picked up by Davis Coleman of DWS, who ran the ball back down to the SCHS 5-yard line. However, as they had done all night, the SCHS defense stiffened up. They denied the Knights the end zone three straight times and on fourth and goal, DWS quarterback Thomas Ray tried to score on a quarterback keeper, but was tackled at the 1-yard by Sidney Blackwell. 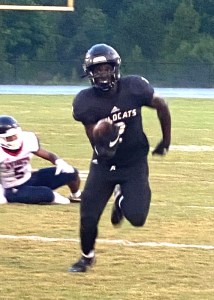 Schley County wide receiver JaLewis Solomon returns a punt for the Wildcats. Solomon caught one touchdown pass in the win over DWS.
Photo by Ken Gustafson

The Wildcats got the ball back deep in their own territory, but Zayden Walker did something about it. The freshman running back managed to break through the DWS defense and scampered 98 yards for an SCHS touchdown. The extra point by Lopez was good and SCHS enjoyed a 21-0 lead.

On their next possession, the Knights once again were able to move the ball inside the 10-yard line with another chance to score a touchdown, but the SCHS defense once again stopped the Knights on their first three attempts to reach pay dirt. In stead of attempting a chip shot field goal, DWS decided once again to go for it on fourth down, but once again, they were denied by the Wildcats defense.

As a result, the Wildcats went into the locker room at halftime with a 21-0 lead, having denied DWS the end zone eight straight times. 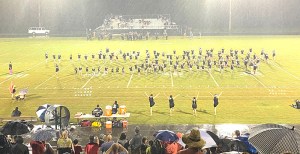 Approximately 120 young cheerleaders who took part in Schley County’s mini cheerleading camp this past week put on a performance at halftime.
Photo by Ken Gustafson

At halftime, fans were treated to a performance by a group of approximately 120 young cheerleaders. These cheerleaders had been attending Schley County’s mini cheerleading camp during the past week and got the opportunity to put the skills that they learned at the camp into practice in front of the crowd at Wildcat Stadium.

In the second half, the success of the SCHS defense continued to embolden and inspire the offense. With a little over eight minutes left in the third quarter, the Wildcats thought they had another touchdown when JaLewis Solomon broke through the Knights’ defense and scored. However, a holding penalty was called against SCHS. That couldn’t stop the Wildcats on this night though. On third down and five from the DWS 13, Kanazawa connected with Jack Clark for his second touchdown pass of the night. The extra point by Lopez was good and the rout was on as the Wildcats had a commanding 28-0 lead with 6:02 to go in the third quarter.

Then with 4:04 left in the third, Kanazawa connected with Solomon for a 19-yard touchdown pass. Lopez’s extra point was good and the SCHS lead was at 35-0. 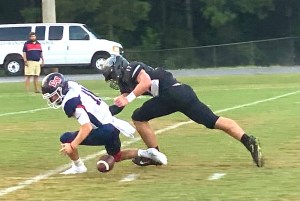 Even with the big lead, the Wildcats continued to play hard, as Sidney Blackwell was able to sack Ray in the backfield on he Knights’ ensuing possession. A few plays later, the Wildcats made another big play when Carson Westbrook intercepted Ray’s pass and ran the ball back to the 50-yard line.

Even in the waning minutes of the fourth quarter, the Wildcats continued to make a statement on defense, as Noah Rigsby sacked Ray in the backfield.

With a little over three minutes left in the game, SCHS used a steady ground game to move the ball down inside the DWS 20-yard line, but the Wildcats decided to run the clock out to secure their 35-0 victory. 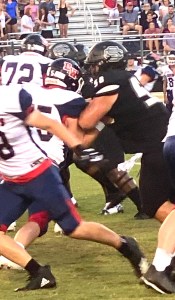 Kanazawa finished the game having completed 8 of 19 passes for 87 yards and three touchdowns, while Zayden Walker rushed for 174 yards on 12 carries and scored two touchdowns in the victory. JaLewis Solomon was the leading receiver for the Wildcats. Solomon had five receptions for 45 yards and caught one touchdown pass.

On the defensive side of the ball, Carson Westbrook led the Wildcats with eight tackles and had one interception for 38 yards. Both Noah Rigsby and Wyatt Halstead were able to get to the quarterback as both of them tallied a sack. 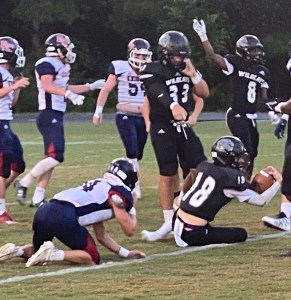 Schley County’s Carson Westbrook (18) recovers a fumble by DWS punt returner Boles Middleton. However, the fumble was nullified because the referees ruled that Middleton was down by contact.
Photo by Ken Gustafson

SCHS will be off next week, but will travel to Rochelle, GA on Friday, September 3 to take on Wilcox County. Kickoff is scheduled for 7:30 p.m.