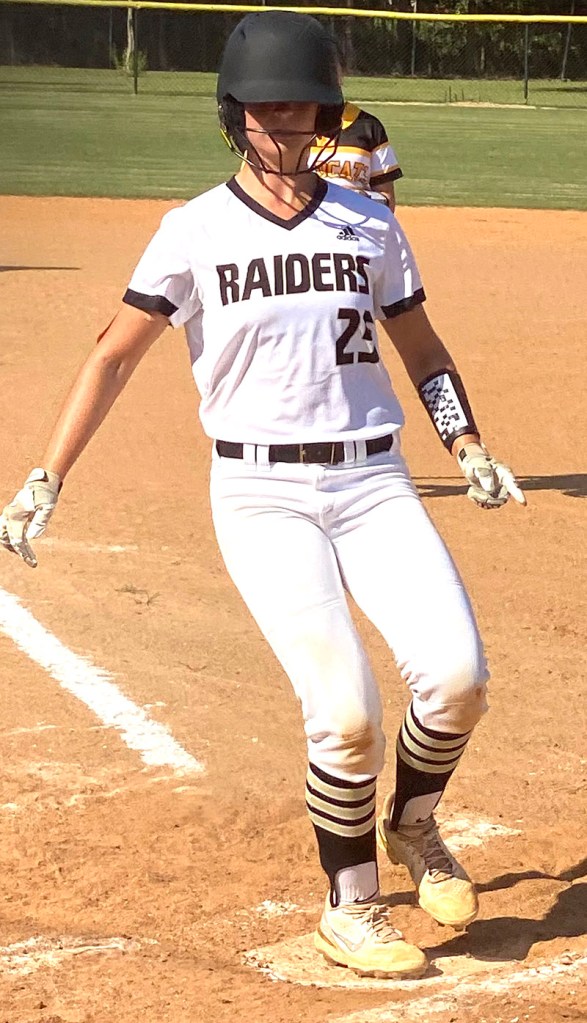 Southland Academy’s Landry Hart scores one of the Lady Raiders’ nine runs in their win over Crisp Academy. Hart went 3 for 4 at the plate with a double, two singles and three runs scored to help lead SAR to victory. Photo by Ken Gustafson

AMERICUS – Coming off a tough GISA Region 3-AAA loss to Tiftarea Academy last Thursday, the Southland Academy Lady Raiders were eager to get back to playing winning softball when they took the field on Tuesday, September 7 against their non-region foes from across the Flint River: the Lady Wildcats of Crisp Academy. CA took a 1-0 lead in the top of the first, but the Lady Raiders responded with four runs in the bottom of the second. That offensive outburst would end up propelling SAR to go on and defeat the Lady Wildcats 9-3 at the Southland Academy Softball Complex.

SAR first baseman Landry Hart led the Lady Raiders’ offense by going 3 for 4 at the plate with a double and three runs scored. Both Morgan Weaver and T.J. Bowden also came through at the plate, as each went 1 for 3 with two RBIs and a run scored. 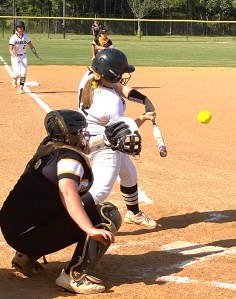 In the bottom of the second inning, Landry Hart led things off with a single and Maddie Godwin was able to draw a walk off CA starting pitcher Camilla Bloodworth. With runners at first and second and nobody out, Samantha Wojnar then executed a bunt single, loading the bases for Eva Grace Studdard. Bloodworth was able to strike out Studdard for the first out, but not before Hart scored from third on a wild pitch to tie the game at 1-1. After Morgan Minick was able to draw a walk, Morgan Weaver drove in two runs on a double to right field. The Lady Raiders added their fourth run of the game before the inning was over when Minick scored on a passed ball. 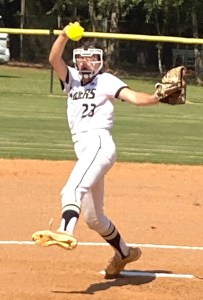 Southland Academy pitcher Chelci Woody gave up two runs on four hits and struck out three batters while walking one in helping lead the Lady Raiders to a 9-3 victory over Crisp Academy.
Photo by Ken Gustafson

In the bottom of the third, the Lady Raiders scored another run on two hits and were able to take advantage of an error that allowed Hart to score that run.

Trailing 5-1 in the top of the fourth, the Lady Wildcats responded when Bloodworth drove in Laura Evans on an RBI single, but the Lady Raiders countered in their half of the fourth by scoring two more runs on Bowden’s two-run double to left field.

In the bottom of the sixth inning, the Lady Raiders added two more insurance runs. With runners at second and third and one out, Godwin drove in Bowden on a fielder’s choice and Wojnar reached on an error that allowed Hart to score. 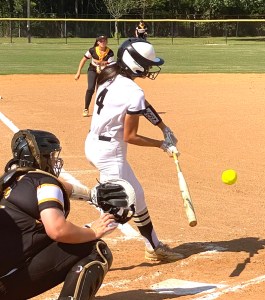 The Lady Wildcats got one run in the top of the seventh, but it would not be enough as the Lady Raiders would go on to win 9-3. 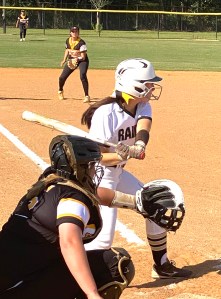 Southland Academy’s Morgan Weaver drove in two runs on an RBI double to right field in the bottom of the second to help lead the Lady Raiders to a 9-3 victory over Crisp Academy.
Photo by Ken Gustafson

The Lady Raiders (5-5) will make the 72-mile trek down to Damascus, GA on Thursday, September 9 to take on Southwest Georgia Academy in another non-region contest. First pitch is scheduled for 4 p.m. SAR’s next home game will be on Monday, September 13 against First Presbyterian Day School at 4:30 p.m.