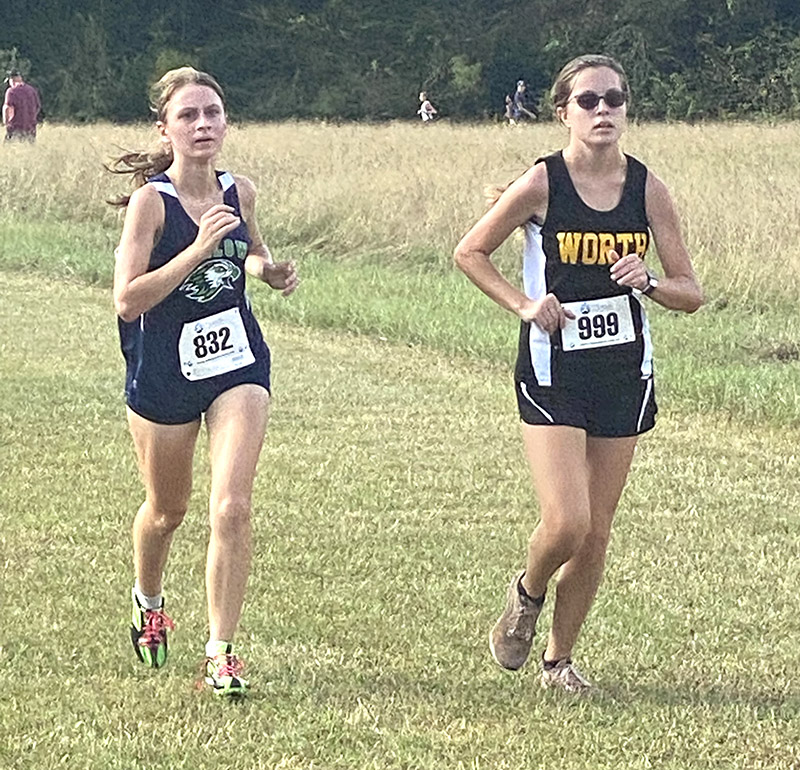 Furlow Charter Sophomore Maria Kilheffer (left) tries to fight her way past Alexia Sokolowski of Worth County (right) at the Crisp County Invitational. Kilheffer ended up edging out Sokolowski for ninth place and helped the Lady Falcons finish in fourth place as a team. Photo by Ken Gustafson

The Lady Falcons finished with a total of 134 points and finished 41 points behind third place finishers Pike County (93 points). Coffee High School finished as the meet runner-up (47 points) and Lowndes High won the team championship with just 25 points. In Cross Country, the goal of each team is to accumulate the fewest points possible.

Furlow sophomore Maria Kilheffer continues to show good form as the region meet approaches. Kilheffer turned in a top 10 finish by crossing the finish line in ninth place with a time of 23:44.10. Coffee’s Kate Merritt won the girls’ race, finishing in a time of 20:35.30.

“I didn’t feel that good about my time. I feel like I could have gone faster,” Kilheffer said. “Later on this year, I want to work on picking up my feet even when I’m tired.”

Kilheffer’s teammate, Litzy Lepiz, was the next local runner to finish. The FC senior finished 30th out of 76 competitors with a time of 26:49.80.

Jasmine Kilheffer was the next Lady Falcon to cross the finish line. The FC senior finished 35th out of 76 competitors with a time of 28:08.10. Her teammates, Addison Drinnon and Syrius Zhang, finished 47th and 48th respectively. Drinnon crossed the line in a time of 30:27.40 and Zhang finished four seconds behind Drinnon in a time of 30:31.30. 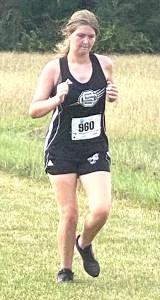 Schley County Freshman Abby Kirkland finished with a time of 39:13.40 at the Crisp County Invitational.
Photo by Ken Gustafson

The first Schley County female athlete to cross the finish line was freshman Abby Kirkland, who finished with a time of 39:13.40. According to Kirkland, the Crisp County course was much more challenging than the previous meet she competed in.

“This race was a lot harder. It was a lot more hillier than the last race, but it might have been because the sun was out and it wasn’t as shady,” Kirkland said. The previous meet that Kirkland competed in was the second of the Southland Raider races held at Southland Academy on Saturday, September 25. In that meet, Kirkland finished in a time of 35:00.60.

Schley County Senior Dustin Howard finished 30th out of 143 competitors and crossed the finish line in a time of 19:55.60 at the Crisp County Invitational.
ATR Archive

The first local runner to cross the finish line was Schley County Senior Dustin Howard. Howard finished 30th out of 143 competitors with a time of 19:55.60, which was about 33 seconds off his time of 19:02.70 that he posted at the Southland Raider meet two weeks before. Aiden Potter of Pike County won the individual boys’ championship and finished with a time of 17:13.20.

The next local runner to cross was Furlow Charter Junior Edwin Gonzalez. Gonzalez finished 53rd out of 143 competitors with a time of 20:53.60.

“It was more of a slow course. It was definitely more tactical of a race,” Gonzalez said. “The end was, by far, the worst part because you had to go over, like, a steady incline, but overall, I believe it to be a good race.” As the regional meet approaches, Gonzalez believes that consistency is the key for him to be successful, as well as staying healthy. “I have been getting sick and injured a lot, so I can improve on my health,” Gonzalez said.

Furlow Charter Junior Edwin Gonzalez finished 53rd out of 143 competitors with a time of 20:53.60 at the Crisp County Invitational.
ATR Archive