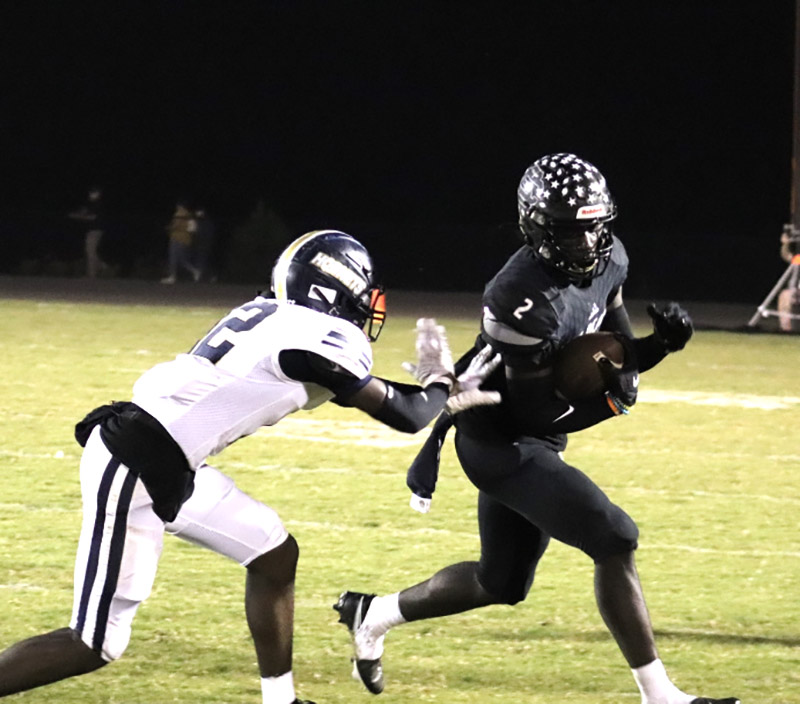 Schley County Sophomore Wide Receiver JaLewis Solomon (#2) caught 10 passes for 109 and scored one touchdown to help lead the Wildcats to a 31-0 victory over Pelham. Photo by Kaia McLennan

ELLAVILLE – The Schley County Wildcats (SCHS) came into Friday’s non-region match up against Pelham ready to put last week’s 54-38 Region 5A-Public loss to Macon County behind them with a win over the Hornets. Thanks to four turnovers forced by the SCHS defense and the offense’s ability to capitalize, the Wildcats earned a 31-0 shutout victory over PHS on Friday evening, October 15, at Wildcat Stadium. 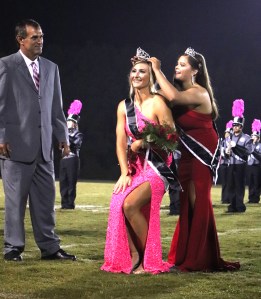 Having seen his team give up 54 points to Macon County the week before, SCHS Head Coach Darren Alford was determined to make sure that the Wildcats clean things up on the defensive side of the ball during their preparation leading up to Friday’s game against the Hornets.

“This week, we worked really hard all week long on fundamentals on the defensive side of the football,” Alford said.  “Coach Peavy (Defensive Coordinator Tim Peavy) and his staff did an excellent job making sure during our I.D. periods that out kids were learning the things that we hadn’t been doing good the last couple of weeks and our defensive line has stepped up. They learned it.  They played awesome tonight.  Our secondary was great tonight. They had three picks.  Our inside and outside linebackers were giving them (PHS) trouble with quarterback pressure all night long, so we really felt good about our defensive effort.”

Several Wildcats played extremely well on defense, but one particular player’s performance stood out. SCHS sophomore defensive back Carson Westbrook tallied two interceptions, recovered a fumble and had a total of six tackles on the night to help lead the Wildcat defense. Senior Middle Linebacker Sidney Blackwell also made a huge impact on the game defensively. Blackwell was all over the field, for the Wildcats, as he led the team in tackles with 15. 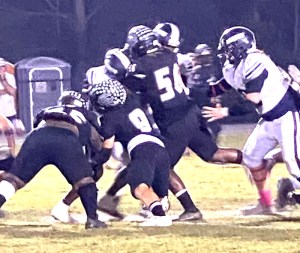 Though the defense made a huge mark on the game, the play of the offense cannot be ignored or minimized. In the passing game, sophomore quarterback Jay Kanazawa completed 15 of 24 passes for 148 yards, two touchdowns and one interception.

In the ground game, the Wildcats generated 162 yards on a total of 32 carries, with freshman running back Zayden Walker leading the way with 86 rushing yards on 16 carries and a touchdown.

In the receiving category, sophomore JaLewis Solomon turned in another tremendous performance. He had 10 receptions for 109 yards and caught one touchdown pass. 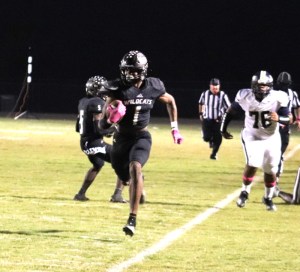 Schley County Junior WR/DB Clinton Jackson (#1) intercepted a pa356)ss and ran the 84 yards back the other way for a touchdown. On offense, Jackson caught two passes for 24 yards for the Wildcats.
Photo by Kaia McLennan

The Wildcats got the ball first and were able to move it down inside the 5-yard line. It took a few plays to cash in, but on fourth and goal from the PHS 3, Kanazawa threw a short touchdown pass to Luke Forehand. The extra point by Javier Lopez was good and SCHS had a 7-0 lead with 8:32 left in the first quarter.

From that point until the middle of the second quarter, neither team could move the ball on offense, as the defenses of both teams were able to make plays. Both teams committed several penalties during this period as well, which made it difficult for either team to mount a scoring drive.

While the SCHS offense struggled through much of the first half, the defense came up with some big stops and forced a turnover when Westbrook intercepted a pass over the middle from PHS quarterback Zane Touchton. Later on in the first half, the Hornets had the ball near the SCHS 10-yard line, but the Wildcats forced PHS into a fourth down situation. Instead of trying a field goal, PHS decided to go for it. However, the SCHS defense was able to stop the Hornets on fourth down to deny PHS any points on the drive. 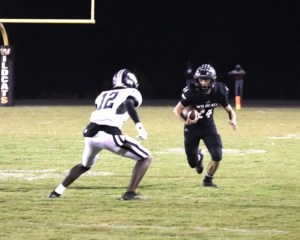 Midway through the second quarter, SCHS thought they had forced another turner when cornerback Clinton Jackson intercepted Touchton’s pass and ran the ball back the other way deep into PHS territory. However, the officials ruled that there were two penalties on the play, one on each team, and it nullified the interception.

In spite of the difficulties the Wildcats were having on offense, they were able to mount another drive inside the PHS 20 yard line. Then running back Zayden Walker broke through the PHS defensive line and scampered 15 yards for another SCHS touchdown. Lopez’s extra point was good and the Wildcats enjoyed a 14-0 lead with 6:15 to go before halftime.

The SCHS defense continued to hold the Hornets scoreless for the remainder of the first half, but with 2.1 seconds left before halftime, Lopez was able kick a 30-yard field goal as time expired to give the Wildcats a 17-0 halftime lead.

Neither team could put any points on the board in the third quarter, but the Wildcats were able to add to their lead with 10:44 left in the final quarter when Kanazawa threw a 34-yard touchdown pass to JaLewis Solomon. The extra point by Lopez was good and SCHS had a comfortable 24-0 lead. That scoring drive was made possible as the result of Westbrook’s second interception of the game. 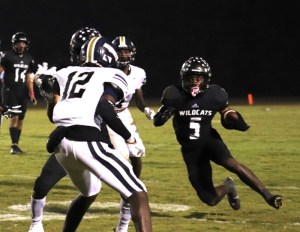 Schley County Junior Running Back Malachi Banks (#5) rushed for 85 yards on 14 carries for the Wildcats.
Photo by Kaia McLennan

Later on in the fourth quarter, the Wildcat defense made another big play when Clinton Jackson intercepted a pass and ran the ball back 84 yards for a touchdown. This time, Jackson’s interception would count and the Wildcats would go on to win 31-0.

“Offensively, we played well enough to score 24 points on the offensive side of the football, so we’ really excited about that also ” Alford said.

With the win, the Wildcats improve their overall record to 6-1 and they are currently 3-1 in the Region 5A-Public standings. With the loss, the Hornets fall to 5-3.

The Wildcats will step back into region play when they host the 7-0 Panthers of Chattahoochee County next Friday, October 22 at 7:30 p.m.