The 12U Georgia Bulldogs celebrate after defeating the Florida Gators 8-0 to win the 11/12-year-old SCPRD Youth Football Championship. Photo by Julia Lachelle

AMERICUS – Thanks to a 55-yard rushing touchdown from scrimmage by Austin Davis, as well as Davis’s successful two-point conversion, the 12U Georgia Bulldogs defeated the Florida Gators 8-0 in the 11/12-Year-Old Championship Game of the Sumter County Parks and Recreation Department (SCPRD) Youth Football League.

This was a low-scoring affair between two talented teams, but Davis’s long run to pay dirt with a little over three minutes left in the first half proved to be the difference. 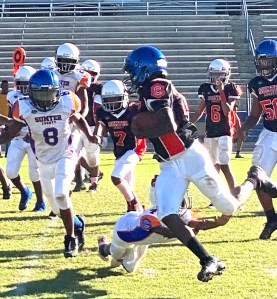 Running Back Austin Davis scored a 55-yard rushing touchdown and converted the two-point conversion to help lead the 12U Bulldogs to an 8-0 win over the Florida Gators to capture the SCPRD 12U Championship.
Photo by Ken Gustafson

There were several defensive plays made in this game by both teams, including a key interception by the Bulldogs near the goal line with 1:33 to go in the third quarter, as the Gators had the ball first and goal at the 1-yard line. The Gators’ running back, Zayden Monts, ran the ball 35 yards towards Bulldogs turned out to be a crucial play in the game, as Georgia came up with the interception shortly thereafter. Both Jaylin Walton of the Bulldogs and Dometrius Monts, Jr. of the Gators also came up with interceptions in this game. 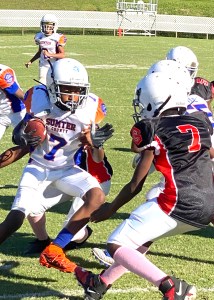 12U Gators defensive back Dometrius Monts Jr. (#7) intercepts a pass and runs the ball back the other way.
Photo by Ken Gustafson