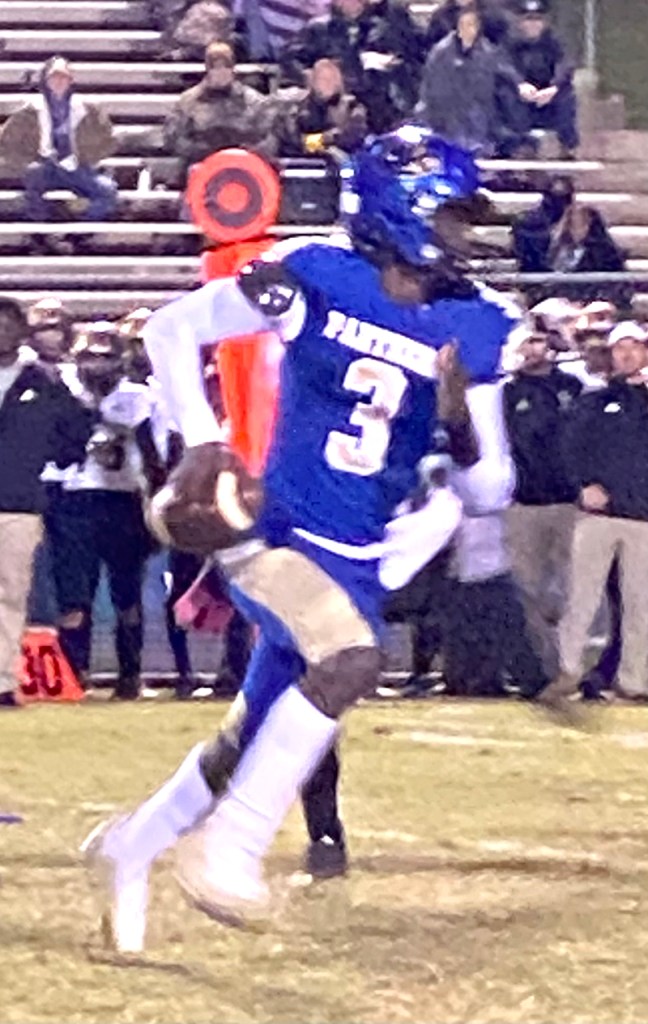 Sumter County quarterback Cameron Evans (#3) threw two touchdown passes and ran for a third one in the Panthers’ 28-26 loss to Mary Persons in their final game of the season. Photo by Ken Gustafson

AMERICUS – Knowing that they had already been eliminated from contention for the state playoffs, the Sumter County Panthers (SCHS) came into their regular season finale against Mary Persons (MPHS) with the hopes of ending their disappointing season on a positive note. After all, it was Senior Night at Alton Shell Stadium, and for the seniors on the squad, Friday’s game against the Bulldogs would be the last high school football game they would ever play in and for some, the last football game they would play in for the rest of their lives. With a little less than 12 minutes to go in the game, the Panthers had a 21-14 lead, but thanks to the running attack of MPH running back Duke Watson, the Bulldogs were able to come from behind and defeat SCHS 28-26 on Friday, November 5.

With the loss, the Panthers finish the season at 1-8 on the season. As for the Bulldogs (7-3 overall, 5-2 in Region 2-AAA), they have now cemented third place in the region standings and will be the #3 seed out of Region 2-AAA in the GHSA Class AAA State Playoffs, which begin next weekend.

“I’m proud of our effort and our never-quit mentality,” SCHS Head Coach Ross Couch said. “These guys played their hearts out and left it all on the field. While the game and season didn’t go as we hoped, I’m proud of the grit and determination of our team. Our seniors gave it their all for four years and have nothing to hang their heads about.”

Later on in the quarter, the Panthers tried to mount a drive that would end in points, but failed to do so and were forced to punt. However, the ball was snapped over punter Mason Herron’s head. Herron recovered the ball, but it gave MPHS great field position. A few plays later, the Bulldogs took advantage when Hickman found Duke Watson in the end zone for another touchdown. The extra point was good and the Panthers trailed 14-0 with nine seconds left in the first quarter.

However, SCHS showed some life in the waning minutes of the first half. Thanks to a well-orchestrated drive led by quarterback Cameron Evans, the Panthers were able to move the football all the way down to the MPH 12-yard line. Then on first and 10 from the 12, Evans weaved his way through the MPHS defense and was tackled just shy of the goal line. Then with six seconds left before halftime, running back Anthony Tyson scored a rushing touchdown. The extra point attempt failed and that would later prove to be costly, but the Panthers were back in the game, trailing 14-6 at the half. 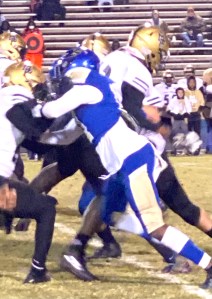 Kavon Lewis is seen here competing as an outside linebacker on defense. On offense, Lewis caught one touchdown pass in the loss to MPH.
Photo by Ken Gustafson

Early in the third quarter, the Panthers responded again with a drive that ended in points as Evans found Kavon Lewis for a 13-yard touchdown pass. SCHS tried to go for two, but the two-point attempt failed, keeping the score at 14-12 MPHS.

Unfortunately for SCHS, that failed two-point conversion attempt, along with the missed extra point before halftime, ended up being a crucial factor in the game’s outcome.

In the closing minutes of the third quarter, the Panthers mounted another drive and moved the football down to the MPHS 20-yard line by the quarter’s end. Then on the first play of the fourth quarter, Evans rolled to his right and found Trauntavious Robinson in the end zone for a touchdown. This time, the two-point try was good, as Jarod Lewis was able to score to give the Panthers a 20-14 lead with 11:49 to go in the game. 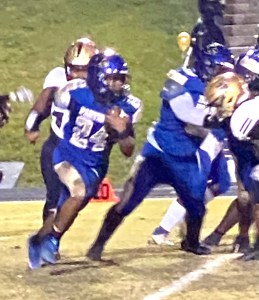 However, it didn’t take long for the Bulldogs to respond. On their second play from scrimmage from near midfield, running back Duke Watson broke through the SCHS defense and scampered all the way for an MPHS touchdown. The extra point was good and the Bulldogs retook the lead 21-20.

On their next possession, the Panthers were unable to move the ball and were forced to punt. MPHS had good field position at its own 40-yard line and went to work right away, as Watson found a big hole and was able to run the ball down to the SCHS 30. A few plays later, Watson scored his third touchdown of the night from five yards out. The extra point was good and the Panthers found themselves trailing 28-20 with 7:24 left in the contest. 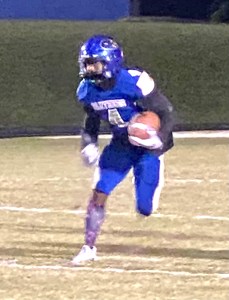 As quick as the Bulldogs were at scoring, the Panthers were just as quick to respond. On their next possession, running back Jarod Lewis ran the ball down into MPHS territory. A couple of plays later on third down and five from the MPHS 13, Evans used his legs to score another SCHS touchdown on a quarterback keeper. Evans tried to score the two-point try, but was stopped. Nevertheless, SCHS only trailed 28-26. 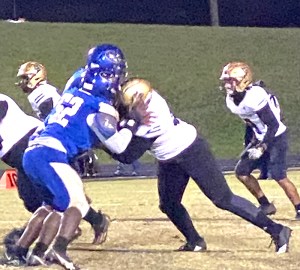 Sumter County offensive lineman Michael Holt, one of the seniors on the squad, blocks for the Panthers against Mary Persons.
Photo by Ken Gustafson

SCHS was forced into a fourth down situation at its own 10-yard line, but on fourth and two, running back Nick Clark was able to gain first down yardage out near the 26. The Panthers were able to move the ball across midfield, but with just a few seconds left, SCHS had to resort to a hook and lateral play to try for a miraculous touchdown. Unfortunately, that play was stopped by the MPH defense and the Bulldogs would escape Americus with a 28-26 victory.

Many of these Panthers will go on to compete for SCHS in other sports, such as basketball, wrestling, baseball and track.