Hurricanes fall to Flagler in conference tournament, but cap off program’s best season ever 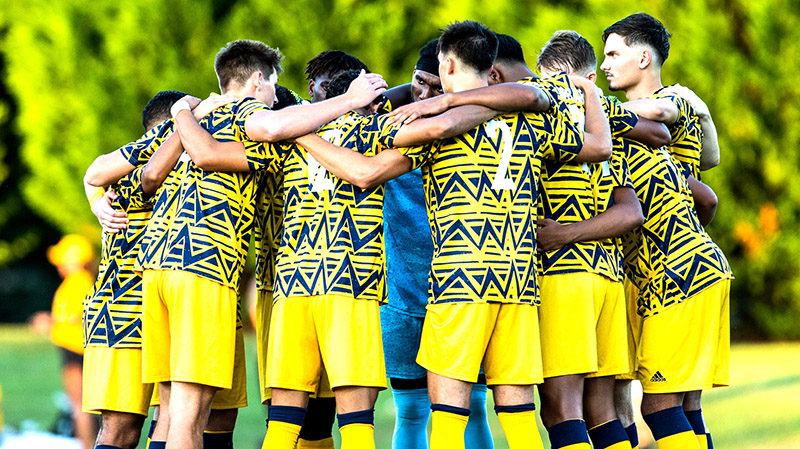 The Georgia Southwestern State University Men’s Soccer Team finished the 2021 season as the most successful men’s soccer team in school history with most wins in a season (6) and is the first squad in school history to qualify for the Peach Belt Conference Tournament. Photo by Christopher Finn

ST. AUGUSTINE, FL – The Georgia Southwestern State University Men’s Soccer Team (GSW) was eliminated from the Peach Belt Conference Tournament with a 3-0 loss to Flagler College on Sunday, November 7. However, the Hurricanes finished their season with an overall record of 6-9-1 and a PBC record of 4-7-1. The six-win plateau is a school record for the GSW Men’s Soccer Program and the Hurricanes’ four wins in the PBC is also a school record. This year’s squad was also the first GSW men’s squad to qualify for the Peach Belt Conference Tournament.

Fifth-seeded GSW took on the fourth-seeded Saints in St. Augustine, FL in the first round of the PBC Tournament on Sunday, November 7, and were hoping to pull the upset. However, FC got two goals in the first half and one in the second to secure its 3-0 win over the Hurricanes.

The Saints took the lead in the 13th minute on a goal from Matteo Costa. Then seven minutes later, Joeran Osland gave FC a 2-0 lead when he scored on a free kick.

Then in the 86th minute, the Saints capped off their victory over the Hurricanes when Paul Hansen scored off an assist from Al Cooper.

GSW tried its best to get on the scoreboard, as forward Chris Salamatou had three shots on goal, but the Hurricanes were unable to get back in the game and fell to FC 3-0.

Though he allowed three goals in the match, GSW goalkeeper Mauricio Uribe tallied nine saves on the night for the Hurricanes.

The 2021 GSW Men’s Soccer Team is the most successful men’s team in school history and is the first to qualify for the conference tournament in GSW history.

Information in this article was obtained from both the GSW and Flagler athletic websites: www.gswcanes.com and www.flaglerathletics.com.