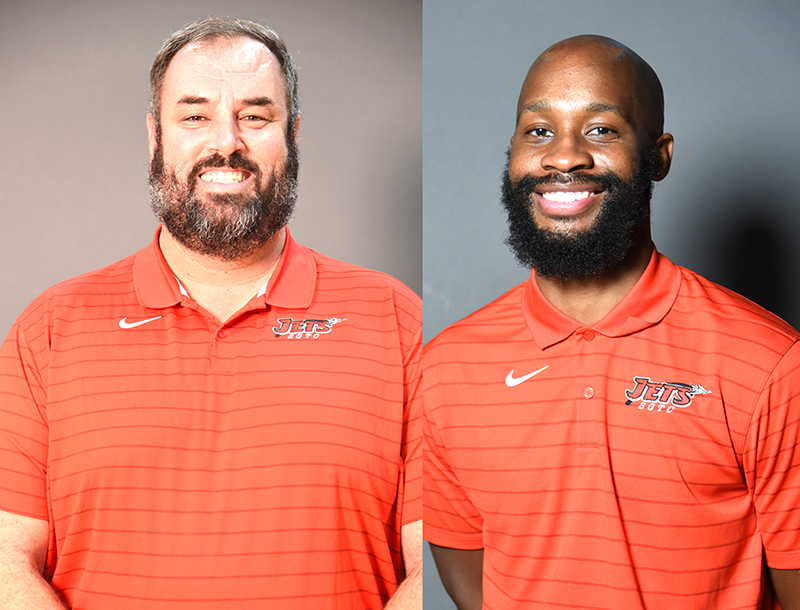 AMERICUS – South Georgia Technical College (SGTC) President Dr. John Watford announced that Chris Ballauer has been named as the new SGTC Men’s Head Basketball Coach and Sports and Fitness Management Instructor for the 2021 – 2022 season.  Former interim part-time assistant coach Jaren Harris, who was also working as a tutor for the college, has been named as the full-time assistant coach for the Jets this season.  He will also continue his tutoring duties.

“We are extremely pleased to take the interim off of Chris Ballauer’ s title this season,” said President Watford.  “He and Jaren Harris did an outstanding job of leading the Jets as interim coaches last season during the COVID-19 pandemic and we are excited to have them back this year as the official head coach and assistant coach for the Jets.”

Ballauer is only the fifth head coach in the history of the SGTC men’s basketball program, which was reinstated in 2001.  Coach Chris Wade took the reins of the program in 2001 and remained with the program through the 2005 – 2006 season.  Former assistant coach Steven Wright was named head coach when Wade resigned in 2006.  He served as head coach for eight seasons and had been with the program since its inception.  He stepped down to accept a ministerial position at a local church and was followed by Douglas Byrd who worked as an assistant coach under Wright for two and a half seasons before being named to the head coach position in 2014 – 2015.

Last year Coach Ballauer and Coach Harris led the Jets to a 3rd place finish in the Georgia Collegiate Athletic Association (GCAA) in a shortened COVID-19 season.  The Jets went 11 – 5 in the conference and 14 – 9 overall.  They advanced to the NJCAA Region 17 tournament and defeated Southern Crescent in the quarterfinals 69 – 64, before losing to the eventual GCAA champion South Georgia State College in Waycross in the semi-finals.

Ballauer came to South Georgia Technical College in 2013 as the assistant coach for Lady Jets’ head coach James Frey.   The Lady Jets were 14 – 3 in the conference and 21 – 4 overall in the 2013 – 2014 regular season, won the GCAA title, the NJCAA Region XVII tournament and defeated Denmark Tech to take the District J title.  The team advanced to the NJCAA National tournament for the first time under Coach Frey and the second in the history of the program.  They finished the season 30 – 5 overall which was the best record ever recorded by a Jets or Lady Jets team.

“Coach Ballauer and Coach Harris did an exceptional job as interim coaches last season and I am looking forward to them taking Jets basketball to that next level,” said President Watford.  “I hope that everyone will come out and watch the Jets and the Lady Jets this season.”

Ballauer and Harris both expressed their appreciation to President Watford and to Athletic Director James Frey.  “I am excited about the opportunity to become the Jets head coach at South Georgia Technical College,” said Ballauer.  “I am looking forward to this challenge and I have enjoyed working as an assistant for both the men’s and the women’s programs.  This is an excellent college with a great reputation for developing student athletes and I am proud to be associated with this program.”

Coach Harris echoed Ballauer’s statement and added that he is excited for the opportunity to join the coaching staff as a full-time assistant coach and looks forward to doing great things as a member of the team at South Georgia Technical College.

Ballauer has a Bachelor of Science in Exercise Science and Wellness from Georgia Southwestern State University and an Associates in Liberal Arts from Coastal Georgia Community College.  Prior to joining South Georgia Technical College Ballauer had worked as an assistant basketball coach at the College of Coastal Georgia.

Harris worked at Lee County High School from 2015 – 2018 and then worked with the Jefferson County Board of Education from 2018 through 2020.  He was an assistant varsity basketball coach at Lee County and has also worked as a recreation administrator in Waverly Georgia.  He has a Bachelor of Science in Health and Human Performance from Albany State University in Albany, GA.  He also attended the College of Coastal Georgia in Brunswick and played basketball.