AMERICUS – On the beautiful, warm Thursday morning of November 18, Mayor Barry Blount, members of the Americus City Council, Main St. Downtown Americus (DDA) Director Qaijuan Willis and others met behind the Municipal Building to celebrate a new era in city’s trolley car service: the unveiling of the new Americus trolley.

“On behalf of the city of Americus, our city council and our mayor, I’d just like to welcome all of you to our ribbon-cutting and celebration of finally having a new trolley,” City Manager Diadra Powell told the crowd. “We’re excited about what is to come, not only with the trolley, but for the city of Americus, so thank you for coming and welcome,” Powell continued. 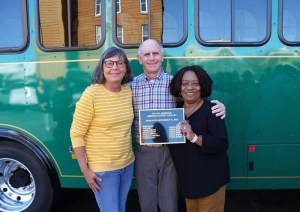 Left to right: City council member Lou Chase (left), Mayor Barry Blount (middle) and City Council member Juanita Wilson (right) pose for a picture in front of the new trolley. Wilson is holding a plaque that commemorates the occasion. The plaque has the names of the mayor and all of the city council members.
Photo by Haley Hanniford

Mayor Barry Blount told the crowd gathered for the occasion that he has gotten a lot of calls about a lot of things, but not nearly as many calls as he got about getting a new trolley when the previous one broke down. “We have done something about the trolley,” Blount said. “We have a grand spankin new trolley that hopefully will last for many years.” Blount went on to say that the original trolley the city got back in 2004, which was driven by Beverly Butcher, was well used and that this new trolley will be well used as well. “I appreciate everybody coming out this morning. This is going to be a beautiful asset to our community.”

This new green-colored trolley, like the white-colored trolley before it, will be available to rent for weddings and other events that will take place in the city throughout the year.

After Mayor Blount was finished speaking, a plaque was placed on the trolley symbolizing the beginning of a new era for the Americus trolley. The plaque lists the date of November 18, 2021 as the date of dedication and it has all of the names of the mayor and the city council members. Once that was done, all of the people who were gathered for the ribbon-cutting ceremony gathered in front of the trolley, where Mayor Blount cut the ribbon to officially commence the trolley’s service to the community. 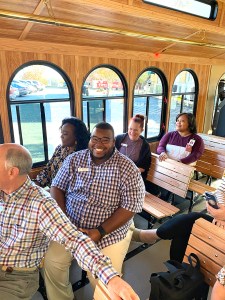 Main St. & DDA Director Qaijuan Willis, Mayor Blount and others enjoy a ride through the city of Americus on the new trolley.
Photo by Ken Gustafson

After the ribbon-cutting ceremony, those who were gathered for the ceremony climbed aboard the trolley for a short ride through the city. Later this evening, the trolley will be used during the city’s Christmas Open House, which will take place throughout Downtown Americus from 5 p.m. to 8 p.m. During the Christmas Open House, the Christmas tree at Rylander Park will be officially lit at 6:30 p.m. and free trolley rides will be available from 5 p.m. to 8 p.m.