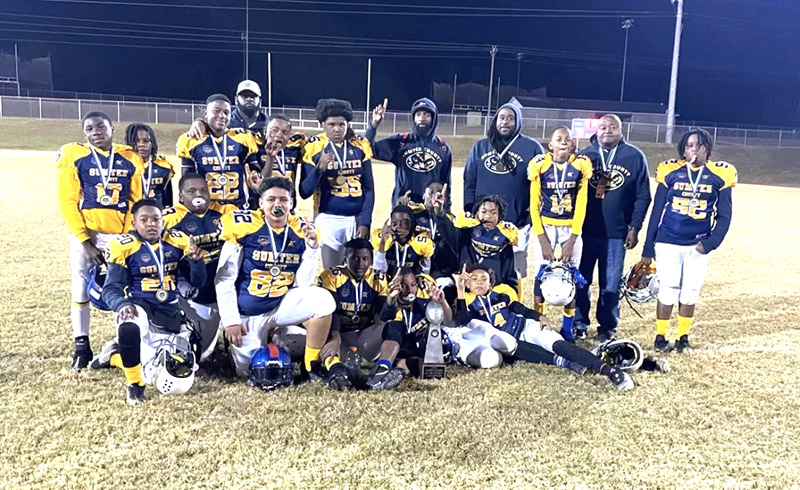 The Sumter County 11-12-year-old All-Star Team poses for a team picture after defeating Crisp County 24-0 to win the GRPA District Championship in the 12U Division. Submitted Photo

TIFTON, GA – Once again, Sumter County is proving that there is much up and coming athletic talent throughout the county, as the 12U, 10U and 8U Sumter County Parks and Recreation (SCPRD) All-Star teams won all three of their respective Georgia Recreation and Parks Association (GRPA) football district championships in Tifton on Monday, November 22.

The Sumter County 12U team defeated Crisp County in Tifton by the score of 24-0 to win the district championship. Alex Brown, Austin Davis, Ayden Robinson and Zayden Monts all scored touchdowns for SC. 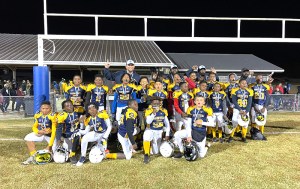 The Sumter County 9-10-year-old All-Star Team poses for a team picture after defeating Lee County 6-0 to win the GRPA District Tournament in the 10U Division.
Submitted Photo

In the 10U game, Chaston Green scored Sumter’s lone touchdown on a pick six and in the 8U game, Ayden Cole scored two touchdowns and Caden Jordan scored one. 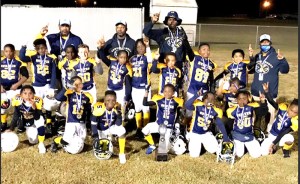 The Sumter County 7-8-year-old All-Star Team poses for a team picture after winning the GRPA District Tournament in the 8U Division.
Submitted Photo

With any amount of long distance travel being done, it costs money, especially being what the gas prices are these days. That is why over the Thanksgiving weekend, members of all three teams, along with their parents and coaches, stood on street corners around town taking donations so that these well-deserving players, their coaches and their parents can go to Effingham County to compete in the GRPA South Georgia Regionals. According to Dwight Harris, Athletic Manager for the SCPRD, the SCPRD is not heading up this fundraiser, but it is simply being done by the players, their parents and coaches.

“The coaches and the parents got together and decided to have a fundraiser to help cut the cost because this Friday (December 3) is the last day of basketball registration,” Harris said. “That’s $65 per child, so they’re trying to make sure they have enough for that and then Christmas is coming up. We play Saturday morning, so they’re going to have to spend the night Friday night and then if they win, they’ve got to stay Saturday night for the championship game on Sunday.” 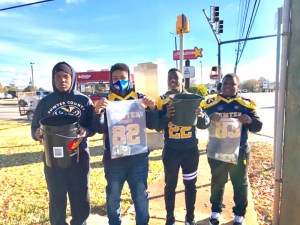 From left to right: SCPRD All-Star football players Ayden Arnett, Ayden Ramirez, Austin Davis and Jamichael Solomon stood at a street corner in Americus over the weekend for the purpose of raising funds for travel and motel costs of the football teams that will be competing in the GRPA South Georgia Regionals in Effingham County this coming weekend, December 4-5.
Submitted Photo

Harris went on to say that if all three teams win their respective regional championships this coming weekend, they will all have to travel the following weekend to compete in their respective GRPA state championships. “They came up with a plan in which they would try to raise money and hopefully, the community would rally behind them and donate some money to help cut the cost of the trips,” Harris said.

According to Harris, from what he has heard, the coaches, players and parents have raised enough money for at least one night at a motel for every child. However, if one of the teams loses their semifinal game, the extra funds that that team has will be transferred to the other teams that are still competing. Those two teams can then evenly distribute the funds amongst themselves. Harris went on to say that the parents will have to pay some of the costs out of pocket, but this fundraiser will at least help defray some of those expenses.

Harris said that in the worst-case scenario, which would involve all three teams losing, the funds left over would be used to give the teams a banquet or would be distributed equally amongst the players and the coaches would not keep any of the funds, as it wouldn’t be their intention to do so anyway. “We want for parents to have to pay out of pocket as less as possible because we do know that basketball season is coming up. The last day to register is this Friday and we’ll be gone, so they need to pay that before they leave, so that’s money out of their pocket,” Harris said.

For those who would like to drop off donations to help cover the travel and motel costs of the SCPRD All-Star football teams, they can drop off their donations at the Americus Times-Recorder office located at 101 GA Highway 27 East, Americus, GA 31709 between the hours of 9 a.m. and 5 p.m. Monday through Thursday of this week.