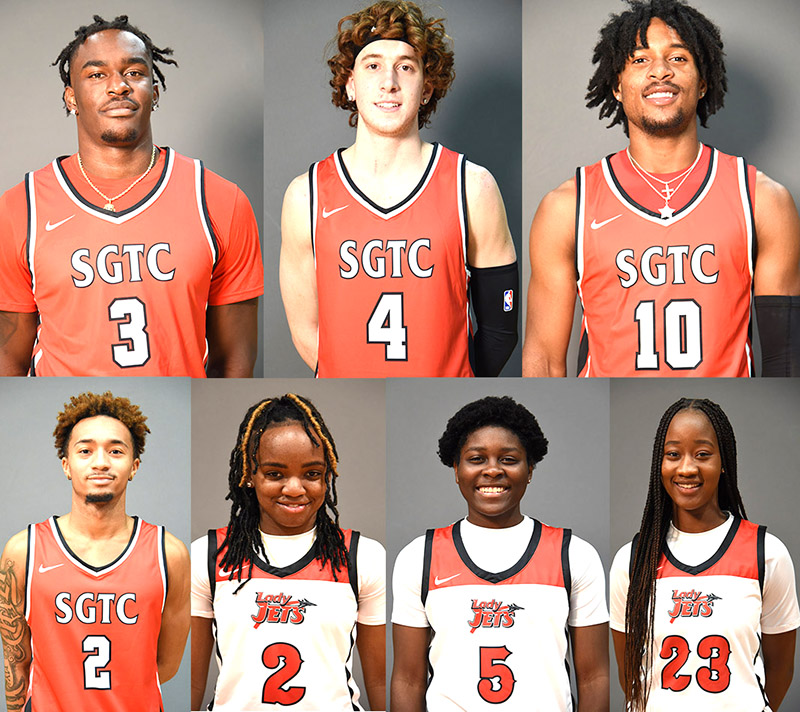 Shown above on the top row are the SGTC Jets and Lady Jets sophomores who earned individual recognition this week in the NJCAA rankings. Shown (l to r) on the top row are Jalen Reynolds (3), Will Johnston (4), and Marvin McGhee, III, (10). Justice Hayes (2), Maikya Simmons (2), Alexia Dizeko (5), and Fanta Gassama (23) are shown on the bottom row (l to r). Photo by Su Ann Bird

The Lady Jets had climbed as high as the fifth-place spot nationally after opening the season unbeaten, but two losses last week dropped them to 15th in the November 22nd poll while the Jets were able to climb from 21st to 17th after remaining unbeaten this season after six games.

“I am very proud of the Jets and the way they have performed on the court so far this season,” said SGTC Jets head coach Chris Ballauer, who was named head coach this season after serving as the interim head coach during the COVID-19 shortened season in 2019 – 2020.  “We realize in order to remain ranked and move up in the NJCAA national standings, we have to keep playing hard and smart.  We have some extremely tough games ahead of us over the next two weeks on the road against other nationally ranked teams so we will need to be at our best to remain undefeated.”

And while the Jets moved up four spots, the Lady Jets dropped 10 notches to 15th place after losing to the now 11th ranked Georgia Highlands team as well as Tallahassee Community College in a narrow 60 – 59 battle in Tallahassee.

“We are struggling right now,” said SGTC Athletic Director and Lady Jets head coach James Frey.  “We have a lack of leadership on the court.  Hopefully we will be doing some soul searching over the next few days and decide what we want from the season starting today.  We are going to continue to work hard and I am going to find seven or eight players that buy in and do the right things and we are going to roll with those seven or eight.”

In addition to the overall team rankings, several Jets and Lady Jets were also highlighted for their individual efforts.  Jets Sophomores Jalen Reynolds, Will Johnston, Marvin McGhee, III, and Justice Hayes were the four Jets spotlighted for their efforts on the court and then three Lady Jets earned individual recognition.  The Lady Jets singled out were: sophomore Maikya Simmons, along with freshmen, Alexia Dizeko, and Fanta Gassama.

Maikya Simmons, the sophomore point guard from Stafford, VA, is ranked 11th in assists per game with an average of 5.7.  Fanta Gassama, a freshman center from Mataro, Spain, was ranked in three categories.  She was listed as 28th in defensive rebounds with 6.6 per game, 29th in total rebounds this season with 67 in seven games, and then 40th in rebounds per game with an average of 9.6.

Alexia Dizeko, a freshman from Switzerland, was the only other Lady Jets ranked individually.  She is currently listed as 7th in the nation in field goal percentage shooting.  She is hitting 71% of her shots this season.

Jets sophomore forward Jalen Reynolds from Darien, Georgia, earned individual rankings in two categories the NJCAA weekly stats.  He is currently ranked 18th in blocked shots with an average of 2.2 per outing.  He is also listed as 24th in the nation in field goal percentage shooting, hitting 73.7% of his attempts.

Johnston stood out in one more ranking.  He is currently 24th in the nation in assists per game.  He averages 5.8 assists each game.  The other Jet highlighted was sophomore guard Justice Hayes from Cartersville.  He broke into the individual rankings in free throw percentage shooting.  He is hitting 87% of his foul shots which put him at 48th nationally.

The Lady Jets will have a chance to improve on their 5 – 2 overall record this weekend as they host the Pete Arrington Thanksgiving Classic. Albany Tech will face Daytona State at 4 p.m. on Friday, November 26th followed by the Lady Jets matching up against former assistant coach Kezia Conyers and Motlow State at 6 p.m.  Then on Saturday, November 27th, Albany Tech and Motlow State face off at 12 noon followed by the Lady Jets vs. Daytona State at 2 p.m.

The Jets will travel to Sarasota to play in the State College of Florida Classic.  They will play the host, State College of Florida at 4 p.m. on Thursday, November 25th then match-up against the seventh ranked Eastern Florida State College group at 4 p.m. on Friday, November 26th followed by a Saturday, November 27th game against the 11th ranked Indian River Community College squad.  They remain on the road throughout the first weeks of December traveling to Marianna, Florida on December 3rd and 4th to play Gulf Coast Community College and Chipola College in the Chipola Classic.  Chipola is currently ranked 4th in the nation.  The Jets travel again to Panama City, FL for the Gulf Coast Classic on December 9th and 10th.  They play Gulf Coast and Florida Southwestern State College.