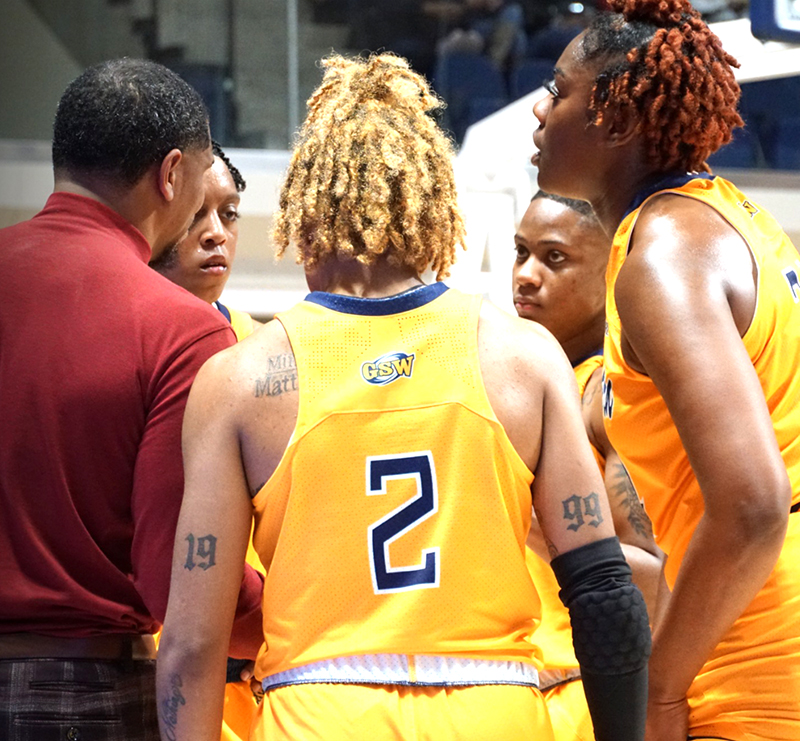 GSW Women’s Head Basketball Coach Justin Payne gathers his team together during a timeout in the Lady Hurricanes’ contest against Valdosta State. Photo by Christopher Finn

AMERICUS – The Georgia Southwestern State University Women’s Basketball Team (GSW) fell to Valdosta State 78-69 for its first defeat of the season. The 23rd ranked Lady Blazers shot lights out from beyond the arc, making ten three-pointers on 40 percent shooting.

The game was a back and forth contest between both teams and the Lady Blazers held a small lead for the majority of the game. A cold start for the Lady Hurricanes in the fourth quarter was too much to recover from, as VSU was able to hold on from there despite a comeback attempt by GSW.

Jacquelyn Levay kept the Lady Hurricanes in it and led the comeback attempt, as she led GSW in scoring with 18 points. However, those 18 points were not enough to keep GSW’s undefeated season alive.

The Lady Hurricanes (5-1) will look to bounce back at home on Saturday, December 4 against Albany State for their second matchup with the Golden Rams this season. Tip-off for that game is scheduled for 3 p.m.