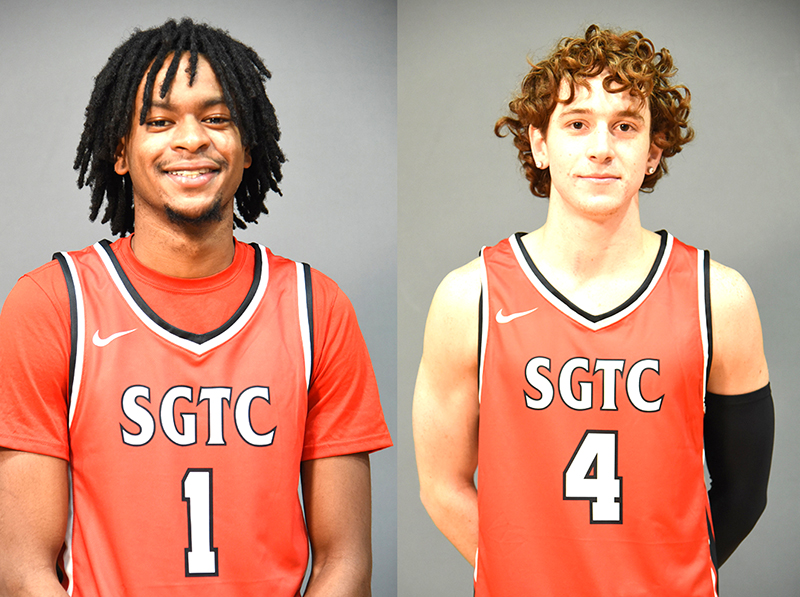 Malik Battle (#1) and Will Johnston (#4) were the top scorers for the Jets in the Gulf Coast Classic this past weekend. Photo by Su Ann Bird

PANAMA CITY, FL – The South Georgia Technical College (SGTC) Jets pulled an 82 – 76 victory over Gulf Coast in the opening game of the Gulf Coast Classic Tournament in Panama City, FL over the weekend but then dropped an 84 – 78 decision to the 25th nationally ranked Florida Southwestern State College Pirates in the next game.

The win over Gulf Coast snapped a five-game losing streak for the Jets and moved them to 7 – 5 overall. They dropped to 7 – 6 after the loss to Florida Southwestern.  The Jets lost to Gulf Coast 75 – 71 a week earlier but turned that loss into an 82 – 76 victory in less than a week behind the strong shooting of sophomore guard Malik Battle, and sophomores Will Johnston and Matija Milivojevic.

The Jets came back the next day and dropped the 84 – 78 decision to Florida Southwestern State despite being up 39 – 38 at the end of the first half. The Pirates outscored the Jets 46 – 39 in the second half to clinch the win.

Sophomore guard Will Johnston led the Jets in scoring in this match-up with 24 points, four rebounds and five assists. Malik Battle added 19 points and was five of five from the three-point line.  He also had three rebounds and one assist. Jalen Reynolds turned in a double-double night with 15 points and 10 rebounds. He also had a steal and a blocked shot.

Fans will have the opportunity to see the Jets in action on Wednesday at 7 p.m. in the Hangar when they host Chattahoochee Valley Community College. The Jets defeated Chattahoochee 84 – 82 in Phenix City earlier this season.  This is the Jets last game of 2021.  They open up the conference schedule at home on January 6th when they host South Georgia State College at 7 p.m.