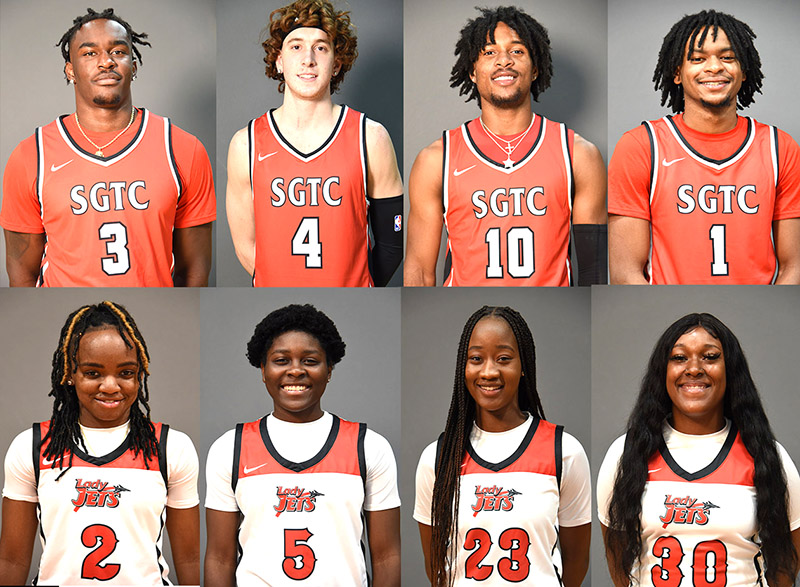 Shown above on the top row are the SGTC Jets and Lady Jets sophomores who earned individual recognition this week in the NJCAA rankings. Shown (l to r) on the top row are Jalen Reynolds (3), Will Johnston (4), Marvin McGhee, III, (10) and Malik Battle (1). Maikya Simmons (2), Alexia Dizeko (5), Fanta Gassama (23) and Kamya Hollingshed (30) are shown on the bottom row (l to r). Photo by SGTC

AMERICUS – The South Georgia Technical College Lady Jets (SGTC) were able to climb two spots in the National Junior College Athletic Association (NJCAA) Division I women’s intercollegiate basketball polls in the first week of 2022 after going 3 – 0 in the Lady Jets Holiday Classic. They moved up from 16th in the final poll of 2021 into 14th place in the opening 2022 poll.

The Lady Jets had climbed as high as the fifth-place spot nationally after opening the season unbeaten, but four tough losses dropped them as low as 21st before they started climbing back to move to 14 – 4 overall in the new year.

“We played well in spurts in the Lady Jets Holiday Classic,” said SGTC Athletic Director and Lady Jets head coach James Frey after his team defeated Tallahassee Community College, Lawson State and 19th ranked Gulf State Community College in the tournament play.  “We still have to learn to control the basketball and play the full 40-minutes we are on the court.  We are young but we are improving each week.”

In addition to the overall team rankings, four Lady Jets and four Jets were also highlighted for their individual efforts.  Freshmen Alexia Diseko and Fanta Gassama along with sophomores Kamya Hollingshed and Maikya Simmons were the four Lady Jets spotlighted.  Jets Sophomores Jalen Reynolds, Will Johnston, Marvin McGhee, III, and Malik Battle were the four Jets singled out for their individual efforts on the court.

Alexia Dizeko, the freshman shooting forward from Switzerland, is currently the sixth best scorer in the nation with a total of 291 points in 18 games.  Red-shirt sophomore Kamya Hollingshed from Locus Grove, GA, joined her on this elite list in the 40th spot with a total of 218 points so far this season.

Dizeko is also ranked 28th in field goal percentage shooting hitting 57.1 of her shots as well as 49th in points per game with an average of 16.2 each outing this season.  She has also done well rebounding and is 15th in the nation in total rebounds this season with 150.

Her teammate, freshman center Fanta Gassama from Mataro, Spain, is currently the third best rebounder in the nation pulling down 204 this season.  The leader has 235 and the second-place rebounder has 205.

Gassama is also listed as eighth in the nation in rebounds per game with an average of 12 and ninth in defensive rebounds pulling down 7.4 each outing.  She is also 21st in offensive rebounding in the nation with 4.6 each time she steps on the court.  Maikya Simmons, the sophomore point guard from Stafford, VA, is ranked 8th in assists per game with an average of 5.6 to close out the individual accomplishments listed in the national rankings.

Jets sophomore forward Jalen Reynolds from Darien, Georgia, earned individual rankings in four categories the NJCAA weekly stats.  He is currently ranked 14th in defensive rebounds pulling down 7.2 each game.  He is 21st overall in rebounding averaging 10.1 each game and is 22nd overall with a total of 141 this season.  In addition to his strong rebounding ability, he is also hitting 67 percent of his shots from the field, which is the 19th best in the nation.

Sophomores Will Johnston, a point guard from Australia, and Marvin McGhee, III, a guard from Atlanta, Georgia are both garnering attention on the court for their scoring ability.  McGhee is currently 23rd overall in points scored with 263 and Johnston is close behind in 34th with 254 points.

The other Jet to break into the individual rankings is sophomore guard Malik Battle from Douglasville, GA.  He is seventh in the nation in three-point percentage shooting.  He has hit 55.1 of his shots this season in nine games.

The Lady Jets will travel to Macon on Wednesday, January 5th at 5:30 p.m. to face Central Georgia Tech in a conference match-up and then the Jets will open up the 2022 part of the season at home on Thursday, January 6th at 7 p.m. with a conference match-up against South Georgia State College.  Both teams will then travel to Griffin on January 8th for a double-header against Southern Crescent.  The Lady Jets open at 1 p.m. followed by the Jets at 3 p.m.