Sumter County’s defensive pressure too much for Jackson 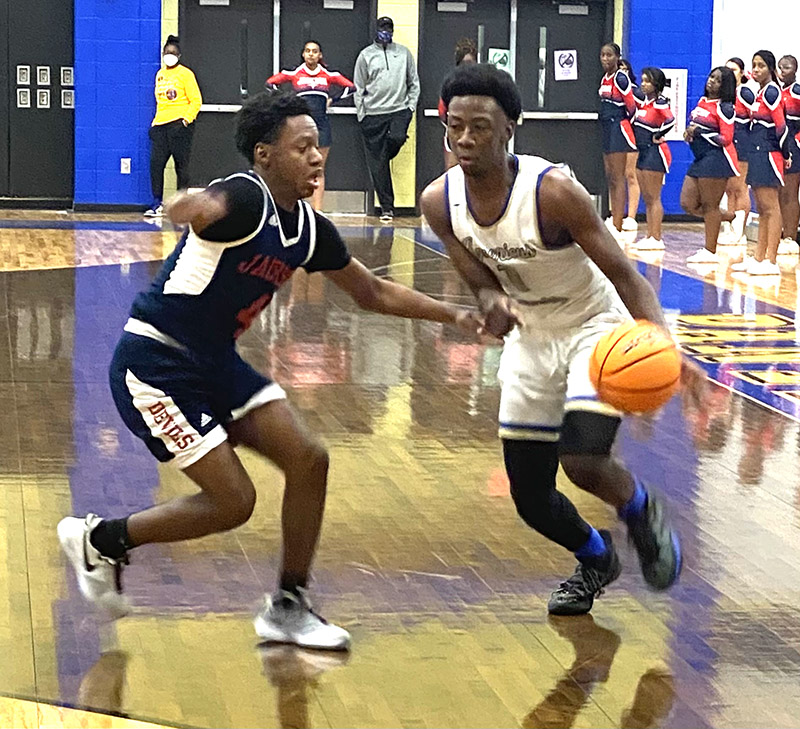 Sumter County senior guard Kyric Davis (#1) led the Panthers in scoring with 16 points in their 78-43 drubbing of the Jackson Red Devils. Photo by Ken Gustafson

AMERICUS – The Sumter County Panthers (SCHS) did to Jackson (JHS) what they have done to numerous opponents during the last few years. They overwhelmed the Red Devils from start to finish by using their tenacious defense to create their offense. They forced numerous turnovers by employing their full-court pressure and scored several transition baskets off those turnovers. This style of play resulted in a 14-4 run to start the game and it continued on until the final horn sounded to signal a 78-43 rout by the Panthers over the Red Devils.

SCHS is now 15-1 on the season and in first place in the Region 2-AAA standings at 6-0. The Panthers are also currently on a 13 game winning streak.

While he was pleased with the victory and with his club’s ability to force turnovers and create offense off those turnovers, SCHS Head Coach Johnny Genwright expressed concern over the fact that the Panthers themselves committed too many turnovers for his liking.

“I talked to my guys at halftime and I told them that we had too many turnovers in the first half. We had 11 turnovers in the first half, so I told them to cut down on the turnovers,” Genwright said. He went on to say that he also told his guys to step up the defensive pressure in the second half, which they did. “My guys did respond well in that second half and we came out with the win,” Genwright continued. 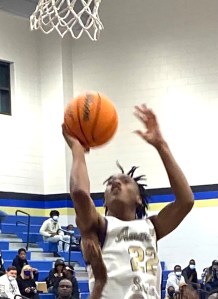 SCHS had three players score in double figures. Kyric Davis led the Panthers in scoring with 16 points, Brandon Pope poured in 14 and D.J. Hurley scored 13 points in the winning cause. The Panthers also got contributions from several other players. Cameron Evans scored seven points, both Devon Dowdell and Traveon Lamar scored six, Latravius Angry and Corey Wright each had five points and Kavon Lewis, Anthony Tyson and Ty’quan Robinson each scored two points to round out the Panthers’ scoring.

The Panthers got off to a fast start and jumped out to a 14-4 lead over the first five minutes of the game. They were able to do this mostly with their strong defense in the half court and through forcing turnovers and scoring baskets in transition, which is what they normally do. However, over the last few minutes of the quarter, both teams went through a mild scoring drought and the Panthers had a 15-7 lead by the quarter’s end.

Hurley opened the scoring in the second quarter with a three-pointer, but the Panthers struggled offensively over the next minute and a half. However, with a little less then six minutes remaining before halftime, Kyric Davis created a steal and fed the ball to Brandon Pope, who then took the ball to the basket and scored. This was the beginning of a 6-2 run by SCHS and it gave the Panthers a 26-11 lead before JHS called a timeout with 4:38 remaining.

Out of the timeout, the Red Devils were able to get two straight baskets from Lacourtney Wise to cut their deficit to 28-15, but the Panthers responded by forcing turnovers with their defensive pressure. This led to a 7-0 run by SCHS that was capped off with a fast break basket by Davis to give the Panthers a 35-15 lead.

During the remaining two minutes of the first half, SCHS maintained its large lead and continued to wreak havoc on the Red Devils with intense full-court defensive pressure. By halftime, the Panthers had a 39-20 lead.

Davis scored 14 of his game high 16 points in the first half to lead SCHS, including knocking down 4 of 5 free throws. 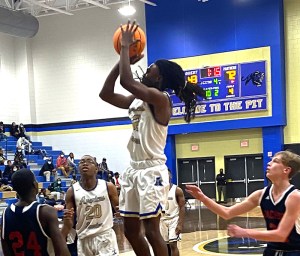 The Panthers’ display of dominance continued on in the fourth quarter as they quickly went on a 7-1 run to take a 65-30 lead. For the remainder of the game, SCHS did not let up its intensity and went on to defeat the Red Devils by the score of 78-43.

Lacourtney Wise led the Red Devils in scoring with 10 points and Tayshaun Morgan chipped in six points in the losing cause. With the loss, JHS is now 3-8 overall and 2-4 in Region 2-AAA competition.

The Panthers will now turn their focus to Mary Persons, whom they will host in another region game on Tuesday, January 11. Tip-off is scheduled for 7:30 p.m.

Lady Raiders make it two straight with win over…