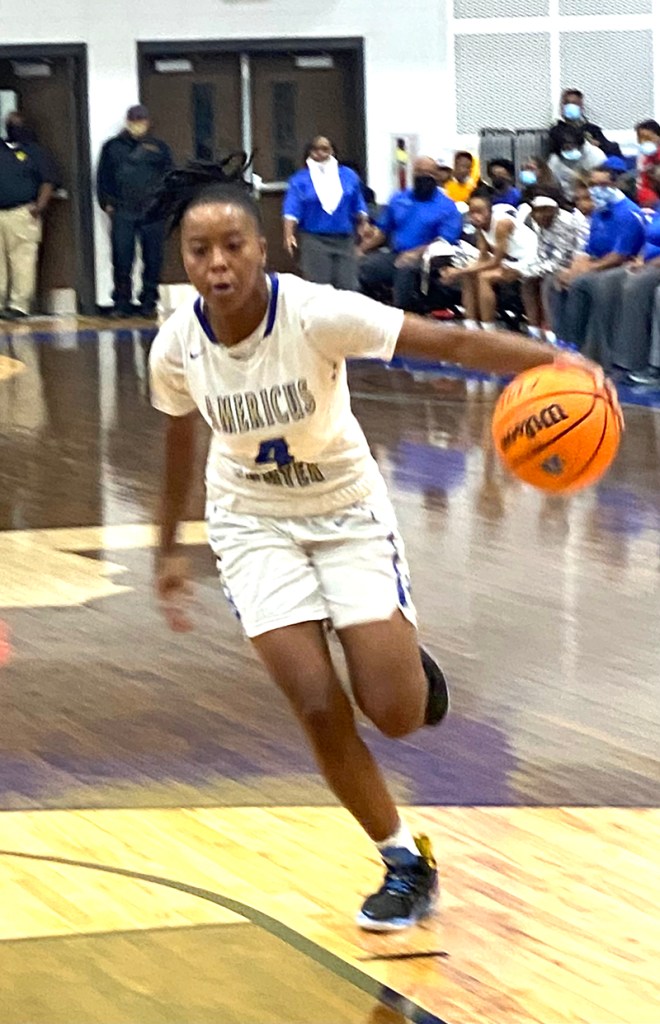 Sumter County junior shooting guard Aviyonna Clemons (4) scored a basket in the third quarter that was the beginning of a key run that jump started the Lady Panthers’ offense. Clemons scored four points in the win over CMH. Photo by Ken Gustafson

AMERICUS – It was a defensive struggle in the first half between the Sumter County Lady Panthers (11-6, 8-0) and the Lady Chargers of Central-Macon (12-4, 6-2): the top two teams in Region 2-AAA. After the first half, SCHS trailed 12-8 at halftime in an extremely rare low-scoring affair between two strong defensive clubs. However, SCHS was able to pick it up in the second half as Aviyonna Clemons, Madison Shelton and D’eira Clark were able to knock down outside shots in the third quarter. Those shots would help jump start the Lady Panthers’ offense and those baskets, along with a key shot block by Trinity Jackson with just seconds left in the game, would eventually lead to a well-earned 35-32 victory for SCHS over the Lady Chargers on Friday, January 14 at the Pitt Gymnasium.

With the win, SCHS is in first place in the Region 2-AAA standings all by themselves at 8-0, while CMH is tied for second place with Peach County at 6-2.

While SCHS Head Coach Sherri Harris was pleased with the victory over CMH, as well as Tuesday’s 41-38 win over Mary Persons, she expressed disappointment and concern over her club’s lack of chemistry on offense.

“These are probably the worst two games we’ve played all year, but we are getting a lot of people back and hopefully, we’ll get some chemistry,” Harris said. “In the first half, we did struggle offensively. Trinity (Jackson) is getting frustrated because when you are averaging a double-double, you become the emphasis of the other team. They are going to try to figure out ways to stop you.”

Jackson, who has been the go to player for the Lady Panthers in several games, did indeed struggle offensively in the first half, scoring just four points as the Lady Chargers made it an emphasis to neutralize her in the post.

“Our other forwards and guards who were rotating in, they were not moving, so it makes it really easy to guard Trinity when the other forward is not moving,” Harris said. “We just have to make some tweaks to our half court offense, get it flowing a little bit better. Right now, we have no chemistry on offense.” 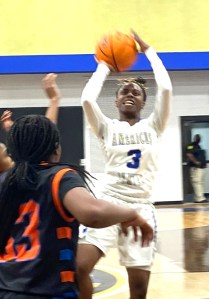 Sumter County senior point guard Tiffani Goodman (3) goes up to shoot. Goodman led the Lady Panthers in scoring with 10 points in the win over Central-Macon.
Photo by Ken Gustafson

Tiffani Goodman led the Lady Panthers in scoring with 10 points and D’eria Clark had nine. Jackson had a total of six points on the night, but came up with what may have been a game-saving shot block with just a few seconds left in the game.

Aviyonna Clemons had four points and both Cornecia Luster and Madison Shelton each scored three points on three-pointers to round out the SCHS scoring.

Throughout the first half, it was a defensive struggle between both teams as neither team could get going offensively. The Lady Panthers struggled at times against both the full-court trap and half court defense of CMH. They also struggled to hit shots from the outside, as well as high-percentage shots on the inside.

On the flip side, however, the Lady Panthers played strong enough defense to keep the Lady Chargers’ offense at bay, but at the same time, CMH was also struggling to score.

With 35 seconds to go before halftime and CMH leading 10-6, the Lady Panthers did show a brief sign of what they do best when Tiffani Goodman was able to get a steal and a transition basket, but other than that, the Lady Panthers were not able force turnovers to create their offense against this quality CMH team like they normally do against other opponents. In addition with having trouble scoring, both teams committed several turnovers in the first half. All of these things resulted in a 12-8 halftime lead for the Lady Chargers. 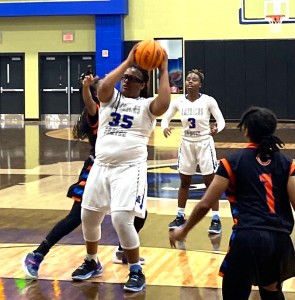 Sumter County freshman guard Madison Shelton (35) knocked down a three-pointer in the second half that was part of a key run by the Lady Panthers in their 35-32 victory over Central-Macon.
Photo by Ken Gustafson

The Lady Panthers struggled to start the second half with missed shots and an unforced turnover, but Clemons was able to hit a jumper from the left side to bring SCHS to within four at 14-10. This was followed by a three-pointer from Madison Shelton and a basket by Goodman. That jumper by Clemons was the beginning of a 5-0 run by the Lady Panthers and it forced CMH to call a timeout with 5:19 left in the third quarter. It appeared that the Lady Panthers had woken up offensively as they now led 15-14.

However, the Lady Chargers went on a 7-0 run over the next three minutes before D’eria Clark knocked down a three-pointer and followed that up with a transition layup, making the score 24-20 CMH. Shortly thereafter, Clark struck again with another three-pointer a few seconds before the end of the third quarter. The Lady Chargers would get a basket before the buzzer sounded to end the quarter, but the Lady Panthers had come alive offensively and only trailed 26-23 with one more quarter to play.

Early in the fourth quarter, Clemons began another SCHS run with a transition basket, which was followed up by a three-pointer from Cornecia Luster that gave the Lady Panthers a 28-26 lead. CMH tied the game on jumper from Kayla Pryor, but Goodman responded with a basket off the glass to regain the lead for SCHS.

With three minutes to play in the game, CMH tied the game again on a layup by Tayelor Davis and took a 32-30 lead on a basket from Taliah Grier. However, the Lady Panthers retied the game when Clemons scored. The game would go down to the wire, as one might expect a game between the two best teams in the region.

With 50 seconds left in the game, Goodman was fouled and made both free throws to give SCHS a 34-32 lead, but each team would commit a turnover over the next few seconds and CMH would have the ball with 34 seconds left and an opportunity to tie or take the lead.

Over the next several seconds, the Lady Chargers tried to work for the good shot, but a three second violation was called against CMH and the Panthers would later come up with a key defensive play by Jackson when she blocked a shot. Shortly thereafter, The Lady Chargers were then assessed a technical foul with 4.6 seconds left for having six players on the court. Clark then hit one of the foul shots to secure the hard-fought 35-32 victory for the Lady Panthers.

Tayelor Davis and Taliah Grier each scored nine points to lead the Lady Chargers in the losing cause.

The Lady Panthers will try to continue their march towards a region championship when they cross the Flint River on Saturday, January 15 to take on the Lady Cougars of Crisp County. Tip-off is scheduled for 6 p.m.