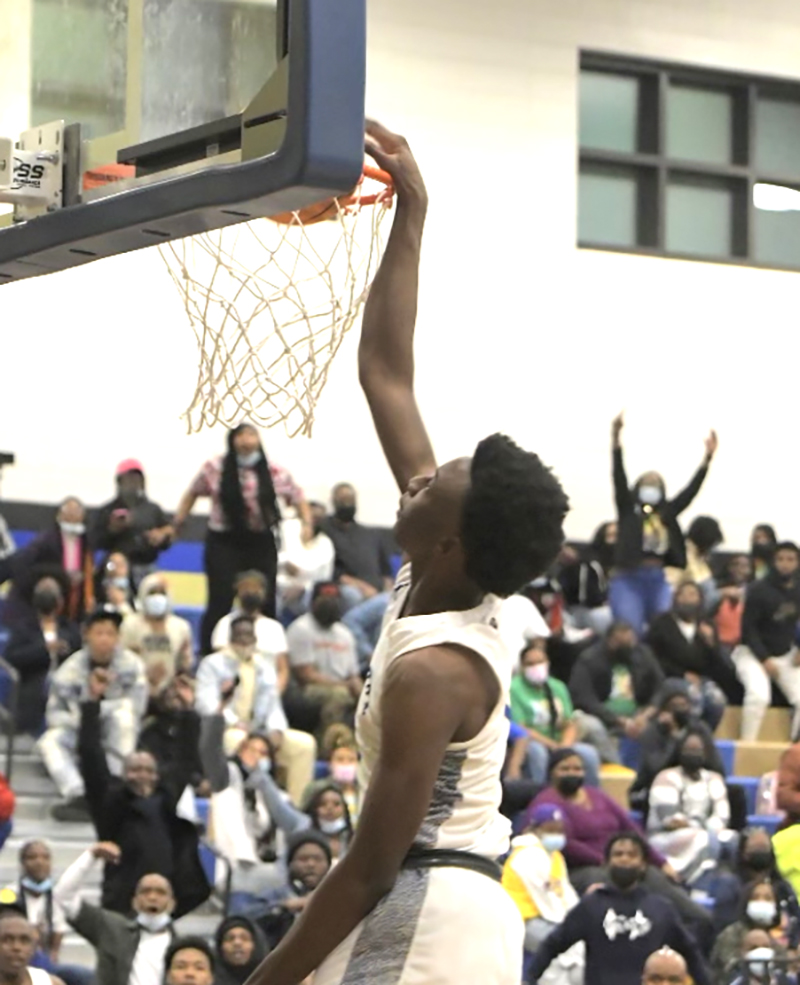 Sumter County senior point guard Kyric Davis executes one of his three dunks on the night against Crisp County. Davis led the Panthers with 21 points. Photo by James Cochran II

AMERICUS – After their hard-fought 61-53 victory at Mary Persons the night before, the Sumter County Varsity Boys Basketball Team (SCHS) wanted to send their five seniors out on a positive note with a win over Crisp County (CCH). After a sluggish second quarter in which the Panthers only scored five points, they came on fire in the second half and went on to rout the Cougars 64-34 on Senior Night, February 5 at the Pitt Gymnasium.

For SCHS seniors Kentravius Dunning, Kyric Davis, Ty’quan Robinson, Elijah Westbrook and Lanquon Thomas, it was a night they will never forget.

SCHS started the game out strong, but in the second quarter, according to head coach Johnny Genwright, they lacked the energy that he wanted to see them compete with and he let them know about it at halftime.

“I told them that I didn’t like the energy that we had,” Genwright said. “We were walking the ball down, turning the ball over, not sharing the ball. We were not playing our game. The seniors came out in the first quarter with energy and then I put my substitutes in and they didn’t, so I told them to come out in the second half with energy and let’s get the W. In the second quarter, we didn’t have any urgency, no energy at all, so we had to pick up our energy to get the win.” 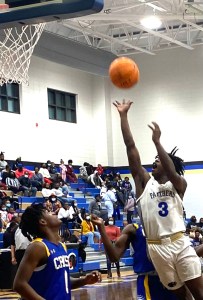 SCHS senior point guard Kyric Davis led the Panthers in scoring with 21 points, including three dunks in the second half. Junior guard Devon Dowdell was also in double figures with 13 and senior Ty’Quan Robinson chipped in nine points in the winning cause.

With the win, the Panthers conclude the regular season with a 23-2 overall record and a 13-1 Region 2-AAA record. They have clinched the #1 seed in the upcoming Region 2-AAA Tournament and will get an automatic bye to the tournament semifinals on Thursday, February 10 at home at 8:30 p.m.

With the loss, the Cougars finish their regular season with an overall record of 10-13 and a Region 2-AAA record of 7-7. CCH was led in scoring by A.J. Brown, who scored 13 points. 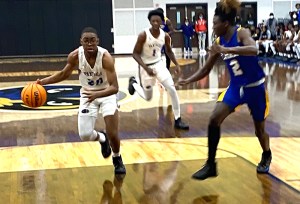 The Panthers quickly jumped out to an 8-0 lead early in the game and would later take an 11-3 lead when Davis drove to the basket and scored. Having been fouled on the play, he was able to make the foul shot to convert the three-point play. However, over the remainder of the first quarter and well into the second quarter, the Panthers’ scoring cooled off and the Cougars were able to cut the SCHS lead to 15-8.

SCHS, however, was able to respond over the remaining minutes of the first half with a 5-2 run and went into halftime leading 20-10.

After a low-scoring second quarter, the Panthers came alive in the third quarter and went on a 10-6 run that included a three-pointer by Devon Dowdell and six more points from Davis on two three-point plays. This run would set the tone for the remainder of the game as SCHS took total control of the game in the second half. 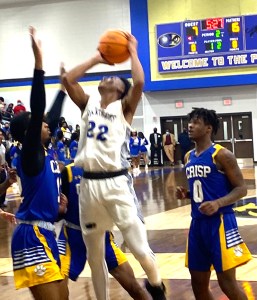 With a little less than four minutes left in the quarter, Davis electrified the crowd with the first of his three dunks to put the Panthers up 33-18. The scoring problems that SCHS had in the second quarter were a thing of the past, as the Panthers were on fire. That fire got even hotter when Dowdell knocked down another three-pointer to put SCHS up 36-19. The Panthers had clearly stepped up their energy in this quarter and as a result, they led CCH 40-21 with one more quarter to play.

The final quarter totally belonged to SCHS. The Panthers really began to do what they have done to teams for the past few years. They used their defensive pressure to create transition run outs. They went on a 9-4 run early in the fourth quarter, which included a one-handed slam-dunk by Davis. This run was the beginning of total dominance by SCHS as they continued to force turnovers and scored numerous baskets in transition. As a result, when the final horn sounded, the Panthers had a 64-34 victory.

The Panthers will now await their opponent in the semifinals of the Region 2-AAA Tournament at SCHS on Thursday, February 10 at 8:30 p.m.