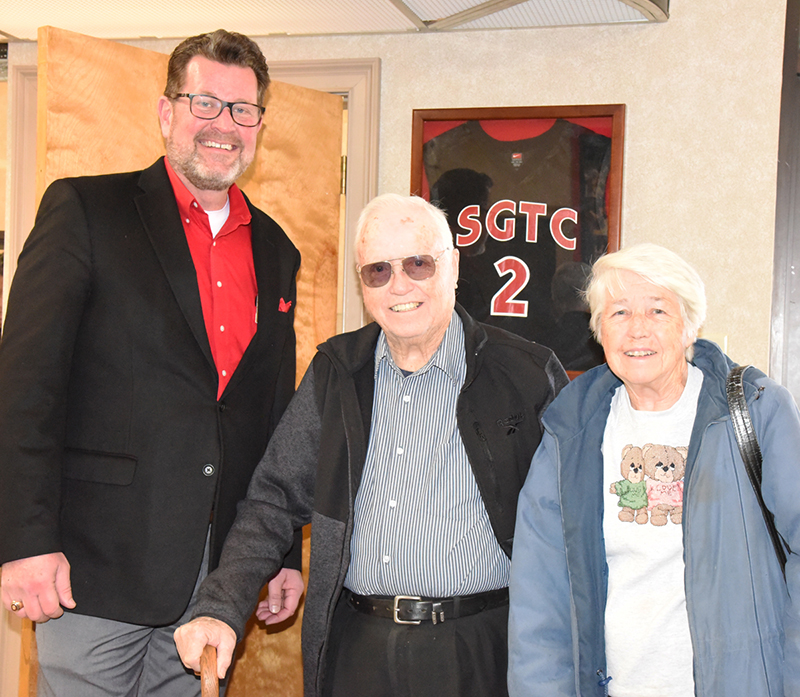 AMERICUS – The skies were overcast and the air had a chill, but the spirits were bright as South Georgia Technical College hosted its annual Sophomore/Alumni Day Celebration Saturday as a tribute to the college’s “Proud Past – Promising Future!”   The college also celebrated the 20th anniversary of starting its intercollegiate Jets basketball program and honored the members of the first 2001 – 2002 Jets basketball squad.

Nearly 350 faculty, staff, alumni, students, retirees, and supporters were on hand for the SGTC Alumni/Sophomore Day Celebration that featured something for everyone.  The Americus – Sumter County Chamber of Commerce cooked out and provided free hotdogs, hamburgers and the trimmings for everyone in attendance.  Free t-shirts were available, a video detailing the history of the reinstatement of intercollegiate basketball at SGTC was played, as well as a Georgia Collegiate Athletic Association Conference double-header with the Central Georgia Technical College Lady Titans and the Southern Crescent Tigers, and special recognition of former Technics, Jets players, alumni and former administrators, faculty and staff were all a part of the special event.

Both the Jets and the Lady Jets were able to take victories over their opponents.  The Lady Jets defeated Central Georgia Tech 83 – 62 and then in a 41-point swing the Jets came from 18 points down to defeat the Southern Crescent Tigers, 86 – 65.

“It was a great day!” said South Georgia Technical College President Dr. John Watford.  “We had a good turnout and everyone seemed to enjoy the celebration.  It was great to see some of the South Georgia Technical College Technic basketball players come back as well as Jets and Lady Jets, former instructors, students, and supporters of this college.  We appreciate everyone who has helped create the proud past that we have enjoyed for 74 years and those who are still working to continue toward our promising future.” 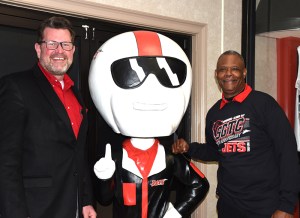 SGTC President Dr. John Watford is shown above with SGTC Board Member Michael Coley, who was a member of the Technics basketball team that was active during the 1950’s through the 1970’s.
Photo by SGTC

The SGTC marketing department featuring the video skills of Pat Peacock put together a video detailing the history of basketball at South Georgia Tech.  President Dr. John Watford as well as retired Presidents Jon Johnson, Sparky Reeves, and retired Vice President of Administrative Services and Athletic Director Janice Davis were spotlighted for their efforts.  The video also features former and current coaches, players, and photos of each team since 2001 – 2002.  It can be found on YouTube at:  https://youtu.be/bC_bQlxq2fk

As part of the SGTC Alumni/Sophomore celebration, SGTC gave away t-shirts, and had drawings for door prizes.  The 2001 – 2002 Jets basketball team was spotlighted as well as former Technic basketball players from the 1950’s, 60’s, and 70’s.  All of the current SGTC Sophomore Jets and Lady Jets were recognized in-between the two games. 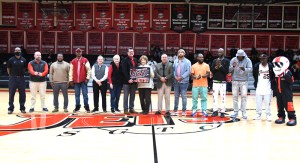 Shown above are eight members of the Jets original basketball team when basketball was restarted back in 2001. They are shown with current President Dr. John Watford, retired President’s Jon Johnson, Sparky Reeves and retired interim President, Vice President of Administrative Services and former Athletic Director Janice Davis along with Steven Wright who was the assistant coach for the Jets in 2001 – 2002. He later became the head coach and athletic director. Sherrill House is also shown. Her late husband Bob House, who was the Director of Business and Industry Services in 2001 named the Jets as part of a contest. The players who returned included Roger Chisolm, Travis Tullis, Jay Turner, Terry “TJ” Brunson, Sylvester Small, Cornelius Goldwire, Mario Harris, and Demetrius Colson. Jason Ward and Steven Hall were unable to attend.
Photo by SGTC

The former Jets majored in Marketing Management, Automotive Technology, Aircraft Structural Technology, Accounting, Computer Information Systems and Business and Office Technology.  Almost all of the first year Jets continued their education and have had productive careers.  Demetrius Colson played at Georgia Southwestern and is now an assistant Lady Jets coach at SGTC.  Mario Harris lives in Warner Robins now and works as a Quality Analyst/Radar Defense Systems in support of war fighters of the U.S. Air Force. 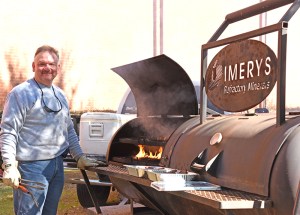 Goldwire has a Bachelor’s of Accounting and is currently employed as a longshoreman with International Longshoreman Association local 1414.  Sylvester Small works as a CNA and also coaches middle and high school basketball.  Brunson started his own company in the automobile industry, Jay Turner is working as a Lieutenant with State Law Enforcement and the Department of Juvenile Justice Security Management Response Team, Travis Tullis retired from a career with Walmart, and Chisolm is a Segmentation Specialist.  Jason Ward entered the U.S. Marine Corps and retired and Steven Hall is employed with Home Depot Corporate.