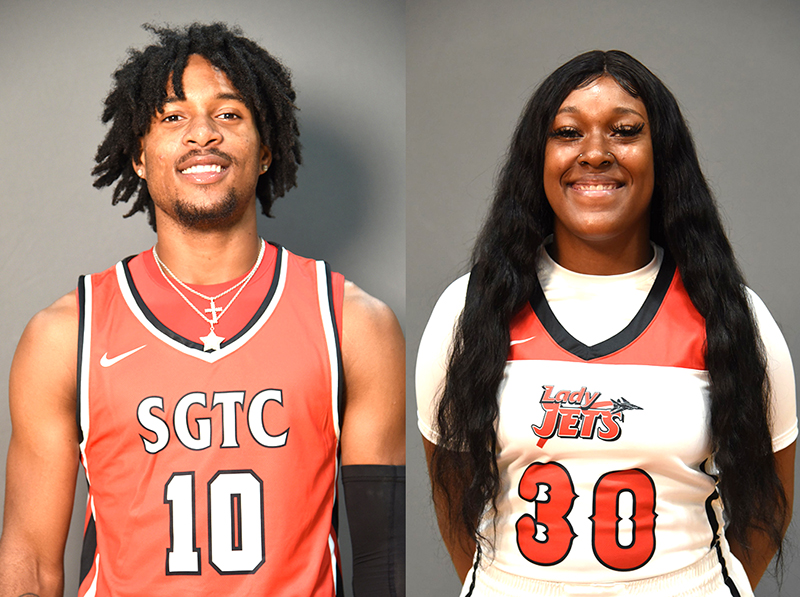 McGhee was selected as the GCAA Division I men’s player of the week after averaging 20.5 points, 6.5 rebounds, five assists and one steal in two wins for the Jets last week.  Hollingshed was selected as the women’s player of the week after she averaged 19.5 points, five rebounds, 1.5 assists and two steals in a win last week.  The Lady Jets are currently ranked 12th in the National Junior College Athletic Association this season.

This is the ninth time this season that the SGTC Jets and Lady Jets have been tapped for this honor.  Freshman center Fanta Gassama was selected for the honor on January 31st for the Lady Jets. This was her second time this season as well.  She was spotlighted on December 13th.   Alexia Dizeko, the freshman shooting forward from Switzerland has been highlighted twice also.  She was selected January 17th and January 3rd.

For the Jets, McGhee has been spotlighted twice, along with Will Johnston, a 6’ 3” point guard from Sydney, Australia who was nominated as a co-player of the week January 24th.

The Jets will host Central Georgia Tech at home on February 15th at 7 p.m.   There is only one more home game for the Jets or Lady Jets after that and it is on February 23rd at 7 p.m. when the Jets host Andrew College.