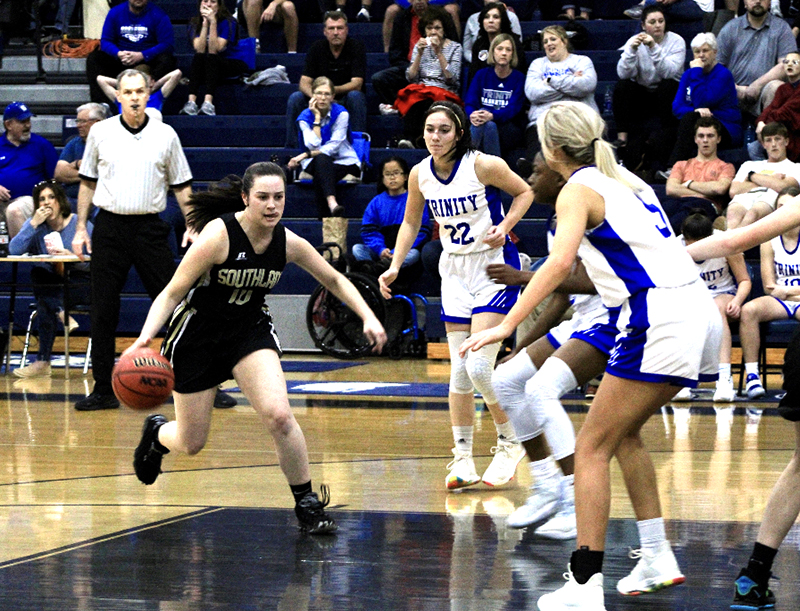 Southland Academy junior guard Morgan Weaver (10) led the Lady Raiders with 14 points in their 49-35 loss to Trinity Christian in the second round of the GISA Class AAA State Tournament. Photo by Kayla Hudgins

MILLEDGEVILLE – The Southland Academy Lady Raiders (SAR) went into Friday afternoon’s GISA Class AAA State Tournament second round battle with the Crusaders of Trinity Christian School of Dublin, GA (TCS) hoping to win this contest and move on to the friendly confines of the GSW Storm Dome for the state semifinals. However, SAR struggled with turnovers, which were caused in part by the TCS full court press and they gave up too many offensive rebounds against the Crusaders. These two factors played key roles in the Lady Raiders’ 49-35 season-ending loss to TCS on Friday, February 18 at John Milledge Academy in Milledgeville, GA.

With the loss, SAR ends its season with a record of 15-12, while TCS (19-10) will continue on to the state semifinals at the GSW Storm Dome this coming week.

Three players did all of SAR’s scoring. Morgan Weaver led the Lady Raiders with 14 points and Riley Mitchell had 13. Mary Beth Easterlin almost cracked the double figures scoring column as she chipped in eight points.

As for the Crusaders, Isabella Moss led them in scoring with 14 points and Audrey Foster had 12 in the winning cause. 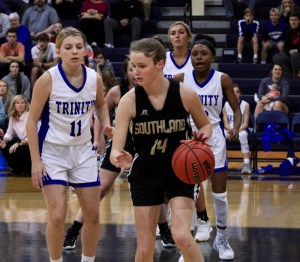 The Crusaders jumped out to a 6-2 lead to start the game, but the Lady Raiders responded with a 4-2 run of their own that was capped of by a basket from Mitchell.

However, TCS punched back with a 5-0 run that was capped off with a three-pointer from Isabella Moss, taking a 13-6 lead. SAR tried to remain within striking distance as Weaver would later knock down a three-pointer to bring the Lady Raiders to within seven at 16-9, but the Crusaders continued to maintain their lead over the next minute or so, as Adelaide Moss drained a three-pointer to give TCS a 19-11 lead. 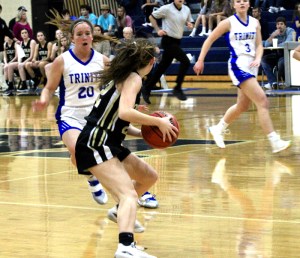 However, the Lady Raiders would not go away and went on a 6-3 to close out the first half. By halftime, SAR was still in striking distance, trailing 22-17.

Weaver scored seven of her 14 points in the first half to lead the Lady Raiders in first half scoring.

Over the first few minutes of the third quarter, TCS outscored the Lady Raiders 7-4 before Mitchell scored to bring SAR to within six at 29-23. Unfortunately for the Lady Raiders, a three-pointer by Isabella Moss would be the beginning of a 9-0 run by the Crusaders and it led to a double-digit deficit from which SAR would not be able to come back from.

Trailing 43-25 in the fourth quarter, the Lady Raiders tried one last heroic effort to stage a dramatic comeback, as Mitchell and Weaver hit back-to-back three-pointers to bring the SAR deficit to 43-31. Shortly thereafter, Mitchell scored again to bring the Lady Raiders to within 10, but that would be as close as SAR would get as the Crusaders went on to end the Lady Raiders’ season and their quest to defend their state title with a 49-35 victory.