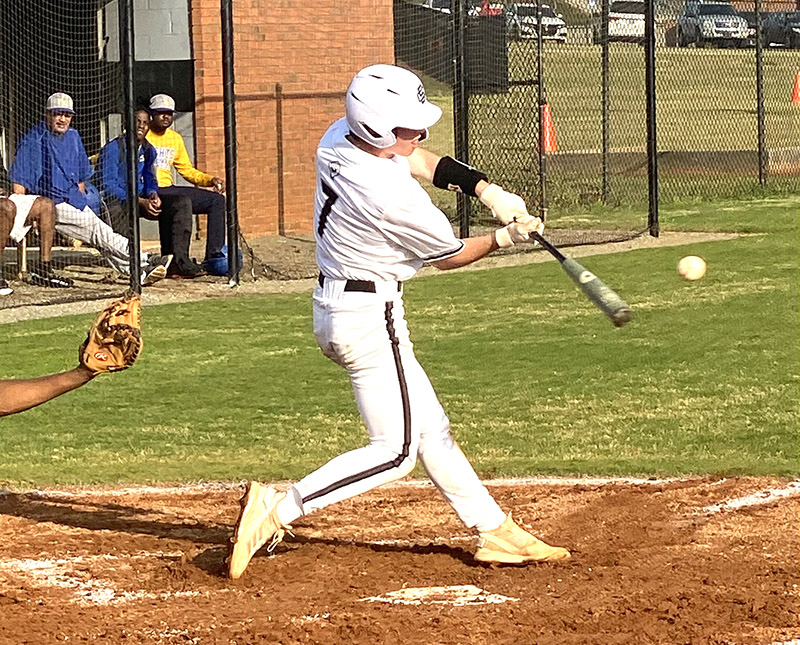 Schley County shortstop Carson Westbrook went 2 for 3 with a triple and four RBIs in the Wildcats’ 17-0 win over Stewart County in Game 1. In Game 2, he went 3 for 3 with a double, two RBIs and three runs scored. Photo by Ken Gustafson

In Game 1, the Wildcats scored all of their 17 runs in the bottom of the first inning and they took advantage of five Stewart County errors. After two and a half innings of play, the game was run ruled.

SCHS first baseman Trypp Lumpkin went 2 for 2 at the plate with a triple, a double, two RBIs and two runs scored to lead the Wildcats’ attack. Shortstop Carson Westbrook and third baseman Jack Clark each went 2 for 3 at the plate. Westbrook had a triple and a single with four RBIs and a run scored, while Clark had a double and a single with an RBI and two runs scored. Wesley Hughes, Ridge James and Owen Shufflebarger each had a hit in this game as well. In total, the Wildcats scored 17 runs on nine hits. 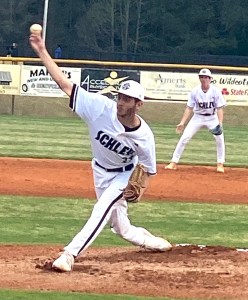 Schley County starting pitcher Cameron Barnes struck out five hitters in the Wildcats’ win over Stewart County in Game 1 of a doubleheader.
Photo by Ken Gustafson

Cameron Barnes got the start on the mound for the Wildcats in Game 1. In two innings of work, Barnes was dominant, giving up no runs or hits and striking out five Stewart County batters while walking two. Owen Shufflebarger worked the top of the third and final inning of Game 1. He only gave up a hit and struck out three batters.

Game 2 of this doubleheader was not much different. The Wildcats exploded for 12 runs on nine hits in the bottom of the first inning. Three of those runs came off the bat of Jack Clark, who belted a three-run home run. SCHS added four more runs in the bottom of the second inning on four hits to seal the game. Once again, the game was run ruled after just two and a half innings. 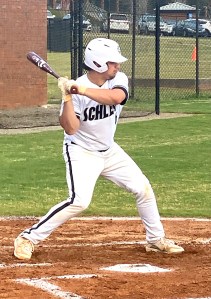 Schley County third baseman Jack Clark belted a three –run homer to lead the Wildcats to a 16-0 shut out victory over Stewart County in Game 2 of a doubleheader.
Photo by Ken Gustafson

Both Westbrook and Clark went 3 for 3 in Game 2, with Clark having the three-run homer. Westbrook had a single and two doubles with two RBIs and scored three runs. In total, the Wildcats scored 16 runs on 13 hits and took advantage of three errors committed by the Knights. 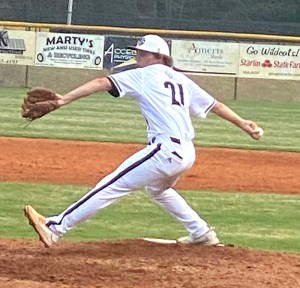 Schley County pitcher Owen Shufflebarger struck out three batters in one inning of work in the Wildcats’ 17-0 win over Stewart County.
Photo by Ken Gustafson

The Wildcats will step out of GHSA play on Saturday, March 12 when they host Westfield out of the GISA at 4 p.m. Then on Tuesday, March 15, SCHS will step back into region play when they travel over to Buena Vista to take on the Eagles of Marion County. First pitch for that game is scheduled for 5:30 p.m.