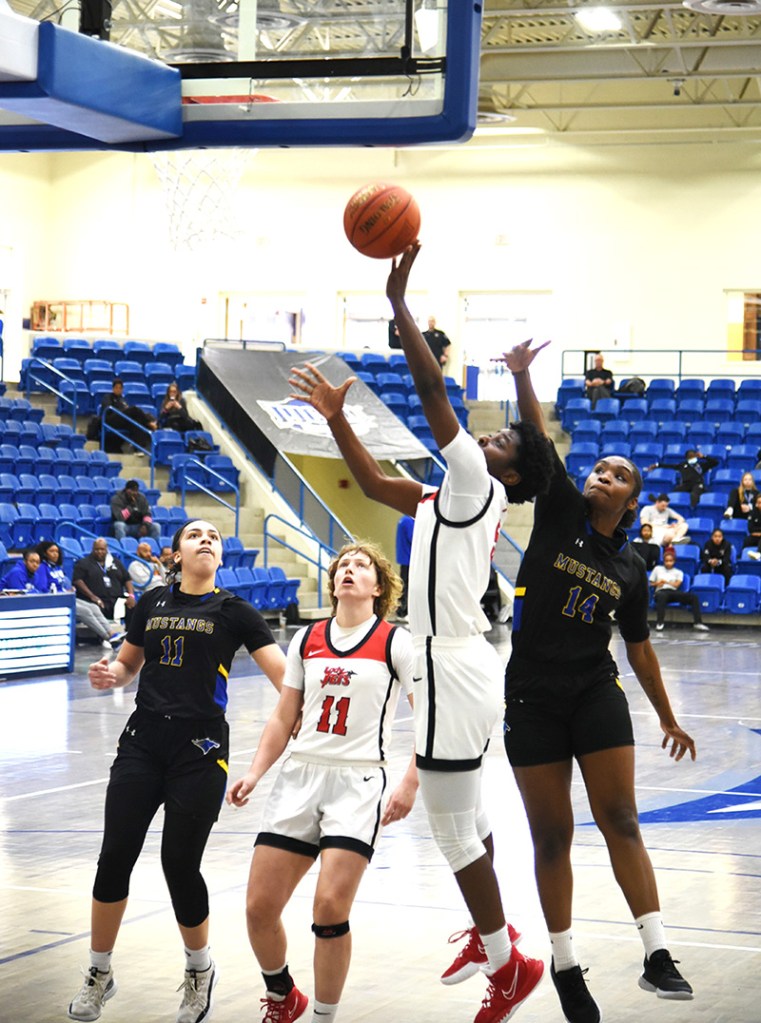 SGTC freshman small forward Alexia Dizeko goes up to score against Monroe College in the Lady Jets’ 77-26 drubbing of MC in the first round of the NJCAA National Tournament. Photo by SGTC Athletics

“I loved our defensive intensity,” said SGTC Athletic Director and Lady Jets head coach James Frey.  “Before today, the fewest points allowed in a national tournament had been 31 points.  So, I am very proud of our defensive effort and I believe that South Georgia Technical College might hold this national record for a good many years.”

In addition to the strong defensive effort that led to a 51-point victory, Frey was pleased that his team got off to a fast start after not playing for a few weeks. “I thought we were able to establish Fanta (Gassama) inside early and it opened us up outside and several people made some shots, especially Kamya Hollingshed,” explained Frey.  “It was good to get her going.  We’ve got to shoot free throws better moving forward to keep winning.(50% – 10 of 20)” 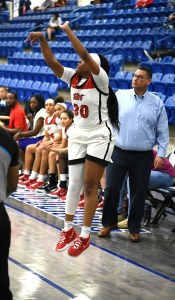 South Georgia Tech sophomore shooting guard Kamya Hollingshed (30) was one of the leading scorers for the Lady Jets in the record setting 77 – 26 victory over Monroe College in the first round of the NJCAA Division I Women’s Basketball tournament.
Photo by SGTC Athletics

“You don’t win 29 games and not be very good,” said Frey, when asked about Arizona Western.  “We will need to play hard and execute in all areas of the game to win.  We are capable but we must be ready to play when we step on the court and we will need sophomores Kamya Hollingshed and Maikya Simmons to step up and set the example for the nine freshmen who have not been here before.”

Hollingshed stepped up in the win over Monroe College.  She hit five of eight three-point attempts to walk away with 15 points in about 20-minutes on the court.  Hollingshed and freshman Alexia Dizeko tied for the top scoring honors on the night.  Dizeko had two three-pointers, and four field goals as well as a free throw.  She also had 10 rebounds, two assists and three steals.  Hollingshed had five rebounds, two assists and one steal to go with her 15 points.

Camryn James and Susana Yepes both contributed five points.  Loes Rozing came away with four points and then Laurie Calixte closed out the scoring for the Lady Jets with three points.  Mame Thiaw and Majomary Ubi did not score but pulled down six rebounds each.

Monroe College did come out and score nine points in the third quarter but SGTC stepped up and answered with 22 points of their own.  The Lady Jets held Monroe to only four points in the fourth quarter to coast to the 77 – 26 victory and the new NJCAA tournament record for allowing the fewest points.

The winner of the Arizona Western – South Georgia Technical College game Thursday will advance to the elite eight round and play Saturday at 1 p.m.  They will face the winner of the Northwest Florida – South Plains game which will be played on Friday, at 1 p.m.