Johnson and Ledger propel Raiders to shut out victory over Brookwood 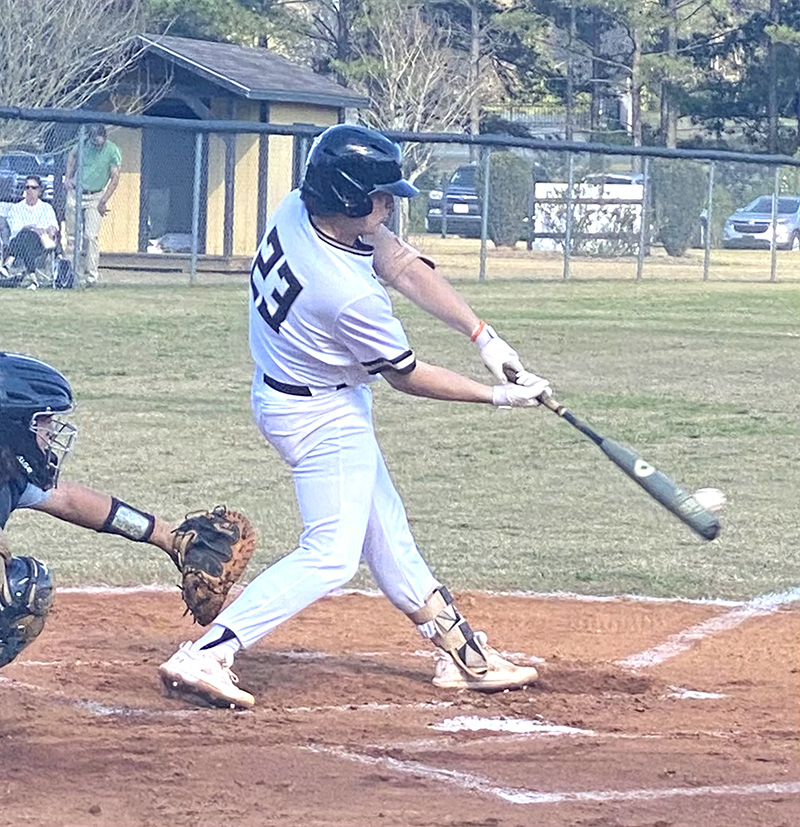 Southland Academy senior pitcher Chase Ledger went 2 for 3 at the plate with a two-run homer and three RBIs to help lead the Raiders to a 7-0 victory over Brookwood. Photo by Ken Gustafson

AMERICUS – Southland Academy (SAR) junior shortstop Henry Johnson and junior pitcher Chase Ledger combined to drive in a total of six runs on four hits to help lead the Raiders to a 7-0 shut out victory over Brookwood in SAR’s first GISA Region 3-AAA victory of the season on Thursday, March 17 at the Southland Academy baseball complex.

Johnson went 2 for 3 at the plate with a double, a single and three RBIs and Ledger went 2 for 3 with a sacrifice fly in the fourth and belted a two-run homer in the sixth to lead SAR’s offensive attack.

In addition to his offensive performance, Ledger dominated on the mound once again for SAR. He pitched seven scoreless innings, giving up five hits and striking out nine Warriors while walking one.

“Chase did do what Chase always does,” SAR Head Coach John Brady said. “He gave us a great chance to win. I was a little concerned at the beginning when we left those opportunities on base and weren’t able to get the runs in, but we finally broke through late in the game. We got big hits from Henry and Chase that kind of busted it open. That was nice. It’s always nice to get that first region win, but Chase was really good today. Our defense was really good. After we saw their pitcher through the batting order about a time and a half, we started putting some better swings on him, so I’m glad to see that. It was a good effort all around.” 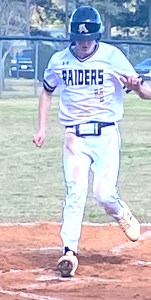 Southland Academy junior shortstop Henry Johnson scores one of the Raiders’ seven runs. Johnson went 2 for 3 at the plate with a double and three RBIs.
Photo by Ken Gustafson

In the bottom of the first inning, the Raiders were able to put runners on first and third when Johnson was hit by a pitch to lead off the frame and Ledger followed with a double.

Johnson then scored on a passed ball to give the Raiders a 1-0 lead.

The Raiders tacked on three more runs in the bottom of the fourth when Johnson drove in two runs on a double to right field and Ledger followed that up with a sacrifice fly to right field, scoring Scout Luvin from third. 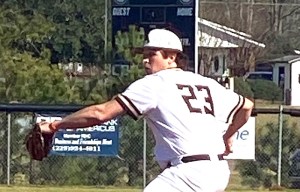 Chase Ledger pitched seven scoreless innings and struck out nine batters to lead the Raiders to a 7-0 victory over Brookwood.
Photo by Ken Gustafson

Then in the bottom of the sixth inning, Caleb Law led off with a double and Johnson would later drive in two more runs on a single. Ledger then put the icing on the cake with a two-run home run over the left field fence to complete the Raiders’ 7-0 victory.

Chris May led the Warriors’ offense by going 2 for 3 at the plate, but Brookwood could not capitalize on its five hits in the game and the Warriors were plagued by five errors. 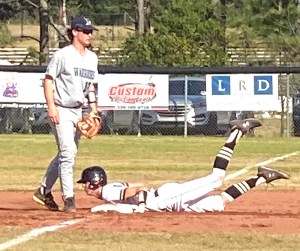 Up next for the Raiders (5-2, 1-0 Region 3-AAA) is a rematch against Glenwood in Phenix City, AL on Saturday, March 18. In their last meeting against the Gators in Americus on Monday, March 14, the Raiders lost by the score of 5-1. First pitch on Saturday is scheduled for 1:30 p.m. EST.