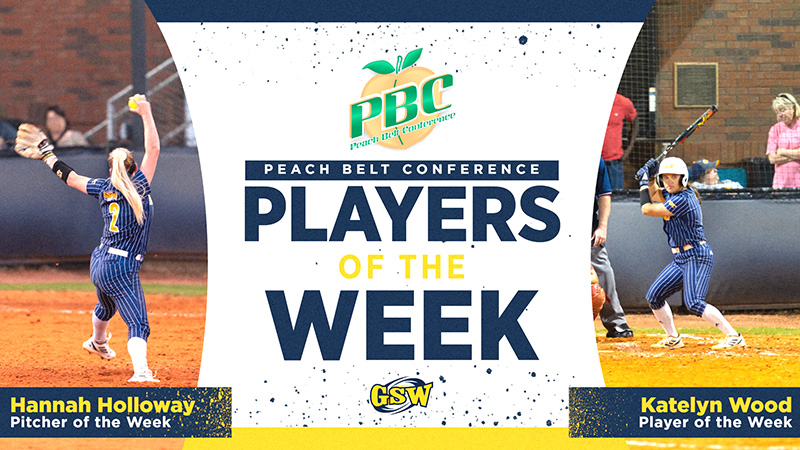 GSW junior infielder Katelyn Wood and sophomore pitcher Hannah Holloway both received Peach Belt Conference honors for their performances on the field for the Lady Hurricanes this past week. Photo by GSW Athletics

Hannah Holloway and Katelyn Wood both received the honors after their performances, leading the Lady Hurricanes to a 4-0 week including a sweep over Georgia College in their first Peach Belt Conference home series this season.

Wood had a monster week, hitting .667 with a 1.500 slugging percentage in four games. The junior third baseman from Crawfordville, Florida drove in 10 runs on the week, including seven in one game as the Hurricanes finished a series sweep over Georgia College. In that third game, she hit a grand slam and a three-run home run. The seven RBIs is tied for the most in a single game in the PBC this season. She also homered against Fort Valley State to begin the week and had multiple hits in three of her four games. Wood leads the PBC and is ranked in the top six nationally in RBI, is third in slugging percentage, fourth in home runs and sixth in batting average. Wood is the third Lady Hurricane in program history to be named PBC Player of the Week and the first since Hayley Tierce in 2018.

Holloway pitched a five-inning no-hitter as the Hurricanes beat Georgia College 8-0 in the second game of their three-game sweep. The sophomore from Pine Island, Fla., faced one batter over the minimum as she allowed a first-inning walk, but that would be it as she retired the next 11 batters in a row until a fielding error in the fifth that was later thrown out attempting to steal. Holloway was 2-0 on the week after picking up a win with three innings of one-hit relief against Fort Valley State. She struck out nine in eight innings total, holding batters to a .040 average. She is currently second in the PBC in wins, seventh in opposing batting average and 10th in ERA. Holloway is the third Lady Hurricane in program history to be named PBC Pitcher of the Week and the first since Allison Pastor in 2013.