Southland Academy Raiders get swept by Valwood in doubleheader 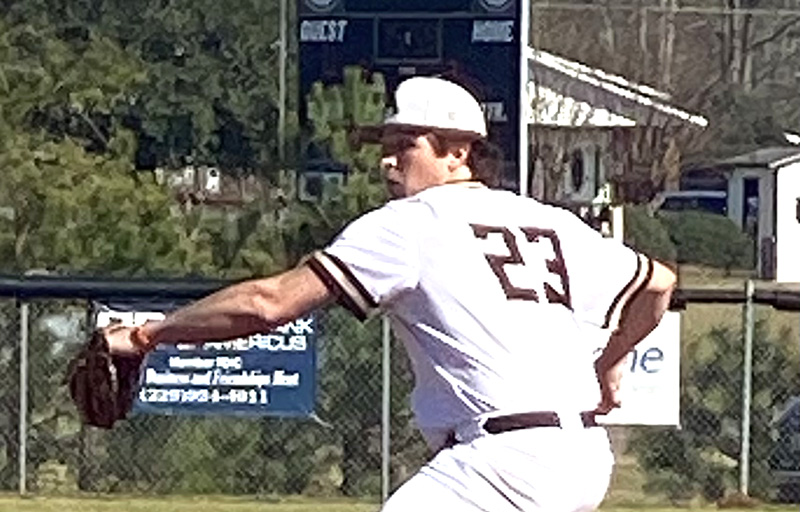 Southland Academy pitcher junior pitcher Chase Ledger went 3 for 3 at the plate in Game 1 against Valwood and struck out seven batters against the Valiants. ATR Archive

HAHIRA, GA – The Southland Academy baseball team (SAR) dropped two straight games to the Valwood Valiants by scores of 7-3 and 5-2 in a doubleheader on Friday, April 15 at the Valwood School.

Valwood would later score two more runs in the bottom of the fourth inning before the Raiders responded with two runs of their own in the top of the fifth. With one out, Chase Ledger drove in a run on an RBI double and Will Godwin would later drive in Ledger on an RBI single to bring the Raiders within three runs.

However, that would be as close as SAR would get. The Valiants added another run in the sixth and would go on to defeat SAR in Game 1 by the score of 7-3.

Ledger got the start on the hill for the Raiders in Game 1 and had seven strikeouts, but gave up six runs on 11 hits in four innings of work. Henry Johnson came on in relief of Ledger and gave up a run on one hit while walking three batters.

In the top of the fifth, the Raiders had a golden opportunity to extend their lead. Ledger led the inning off with a single, Usher reached on an error and Godwin singled to load the bases. However, Caleb Law grounded into a fielder’s choice and Ledger was thrown out at home. Greer Hagerson then struck out for the second out and Luke Exley struck out to end the threat.

Unfortunately for SAR, this was a blown opportunity as it gave the Valiants the opportunity to strike, which they did in the bottom of the fifth. They scored four runs on three hits and took advantage of three walks in the inning. As has been the problem of late for the Raiders in previous games, walks were once again a factor in this doubleheader as SAR pitchers issued a combined total of 10 walks in these two games.

The Valiants added another run in the bottom of the sixth and the Raiders were not able to make a comeback. As a result, SAR fell in Game 2 by the score of 5-2.

Greer Hagerson and Caleb Law each went 1 for 3 in Game 2 and Hagerson drove in an RBI. Buddy Brady and Chase Ledger also went 1 for 3 and Perry Usher went 1 for 4 with an RBI and a run scored. Will Godwin also had a single in this game, having gone 1 for 4.

The Raiders are now 9-9 overall and 4-5 in Region 3-AAA competition. They will try to stop their two-game losing streak when they host John Milledge Academy on Tuesday, April 19 at 4:30 p.m.