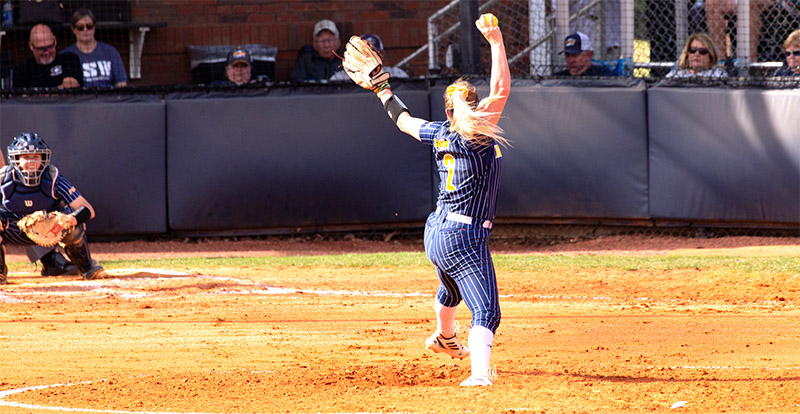 AMERICUS – The Georgia Southwestern State University Softball Team (GSW) defeated Lander University (LU) in two games of their final regular-season series by scores of 1-0 and 4-2 before dropping their final regular season game against the Lady Bearcats by the score of 4-1. All three games were close low-scoring contests, with pitching dominating the weekend for both teams. Hannah Holloway opened the weekend with a complete game shutout victory needing only one run of offense to get the win in the first game of Saturday’s doubleheader.

The bats were livelier in the second game but Regan Lee and Zoe Willis combined to hold the Bearcats to just two runs getting the two-run win to secure the series on Saturday afternoon. Lee pitched five innings allowing two runs on just four hits and Willis came in for relief and earned the 1 and 2/3 inning save. Isabel Marcotte hit two doubles and drove in two runs to lead the Lady Hurricanes’ offensively.

LU avoided the sweep in the third game with a solid performance in the circle in the third game of the series. GSW was held to just two hits and scored its only run in the seventh inning, unable to find the gaps after a trio of LU pitchers were able to lead the Lady Bearcats to a win.

The Lady Hurricanes finished the regular season with an overall record of 33-20 and 14-10 in the Peach Belt Conference. They will head to Lander, S.C. for the Peach Belt Conference Tournament this coming weekend, where they will face Young Harris College in the first round on Friday, May 6. The Lady Hurricanes finish in fourth place in the conference standings, falling in only two series this season, North Georgia and Columbus State, the first and second place teams in the Peach Belt standings respectively.