For some, the 1918-20 influenza pandemic undermined confidence in expert opinions. An anonymous contributor to the Americus Times-Recorder asked readers whether wearing masks, keeping children home from school, and closing churches had any effect on the pandemic at all. “We will never know,” he or she confessed. “We have followed the advice of our medical experts—whose advice, it must be admitted, was not always in accord with the opinion of other learned men.” The writer also pointed out that experts disagreed with one another and often contracted their own statements from one day to the next.

The writer may have been a city school official, perhaps Superintendent James Edward Mathis or Americus High School Principal Charles Monroe Hale. Both men advocated reopening the schools and these positions clashed with public health commissioner Dr. Benjamin Franklin Bond. “Our children have suffered; probably many of them will have had to sacrifice a year of their school life through being forced to do the year’s work all over again,” the writer asserted. “Whether justified or not, many a mother and father feel certain that the closing of the schools probably saved the life of their boy or girl. To them the closing was worth many times the cost.” In hopes of persuading Americus to reopen its schools, the writer asked readers to think about the educational welfare of the children.

The school debate exemplified broader divisions in closing and reopening public spaces during the influenza pandemic. No unified national policy led the way. County and city leaders affected the day-to-day civilian experience of the pandemic more than state or national responses. Opinions differed on whether to require masks in public, close churches and schools, and restrict businesses. This led to a patchwork of trial-and-error policies across the country. Many Americus residents and city officials believed that masks and restricting public gatherings saved lives, but those perspectives were not shared by everyone.

The hope of using masks to stop the spread of influenza in Americus, a charge led by the local chapter of the American Red Cross, peaked and faded early in the pandemic. The Red Cross, with thousands of chapters and millions of volunteers across the country, became the most common way men and—especially—women served local communities during the pandemic. Stephen Pace chaired the local Red Cross chapter; local women did the bulk of the paid and unpaid nursing to “aid in the suppression of Spanish Influenza.” They began producing masks one week after the first cases in the city.
Women in the local Red Cross produced gauze masks—thousands and thousands of masks. Chairman Pace told the public that “the chapter stands ready to make the masks for all who will wear them” and the Times-Recorder called masks “the latest fad” in town. “People of all walks of life are wearing them,” the newspaper claimed, “and if you haven’t gotten one you’re behind the times.” The writer joked that smokers and “courting couples” would find masks intrusive, “but even these [people] are expected to fall in line in order to protect others in the community against infection.”

This optimism did not last for long. When masks in public became mandatory in late October, Chairman Pace pleaded for “all ladies in Americus” to “assemble at the Red Cross work rooms.” An ambitious plan—for shifts of women to produce 10,000 masks in shifts in 48 hours—failed. Mask compliance compounded difficulties in recruiting volunteers. “We find that, though thousands have called and have been given masks,” Pace complained, “only a very limited number are wearing them.” Red Cross volunteers continued to give out gauze for residents to make masks at home, but the organization turned its attention to the soldiers at Souther Field.

While the city government struggled to roll out an effective mask requirement, it also attempted to prevent crowded indoor gatherings. The official order closing schools and churches and to restrict business hours came on October 22 from the local board of health. Unfortunately, the political and emotional timelines for closing and reopening these spaces clashed with the ecological timeline of a pandemic. Week-to-week closures appear—in retrospect—as wishful thinking. Rising cases dashed hopes of a quick reopening in late October or early November. “Our schools have been closed for more than four weeks and we are anxious to have them re-open without hazard,” the Times-Recorder reported in November, “but existing conditions will not justify raising the ban in Americus.”

The initial closing order did not apply to boarding students at the “Aggie School,” now Georgia Southwestern State University. “Out there,” the Times-Recorder reported on October 20, “the situation was about the same as that found almost everywhere,” or, to put it plainly, “the students were scared.” Some headed home only to decide that it was safer at the college and returned to their dormitories. One Trustee and at least one alumnus died, but the school escaped a wider tragedy. This was, in part, because administrators had local control and they followed the lead of local schools and suspended classes for most of the pandemic.

In late November 1918, public officials suggested that schools might be reopened before churches and other public places. School officials argued that children seemed less susceptible to influenza and school authorities promised to “maintain absolute sanitation.” Public health officials responded that it was worth closing schools “if we can prevent one case of influenza with its complications and death.” The schools briefly reopened before Christmas only to close down again as cases surged in early January. While the Aggie School stayed open, the city schools did not reopen once and for all until the end of February 1919.

Closing churches opened further divisions. Rev. George Brown, a 33-year-old minister living at 525 Hancock Drive, quietly followed closing orders in October 1918, but he became an outspoken critic of church closures within a few weeks. He was not naïve to the dangers. After all, he performed numerous graveside services for members of his congregation struck down by influenza. He insisted, though, that a pandemic did not halt Christian duties. “It is with deep regret that we announce, ‘no services Sunday,'” Brown wrote in November. “However, we are ready to do what is best for all concerned, and willingly, if not gladly, comply with the Health Board’s request.” Rev. Brown’s public statement represented the first crack in the local (white) Minister’s Union over compliance with the local government’s closing order.

Those cracks widened in December. White ministers met at the Y.M.C.A. in December to protest government discrimination against religious institutions. From their view, the health board had allowed businesses to stay open but limited churches to one service on Sunday. Rev. Brown argued, with other ministers, that “the church is a business institution and should be considered as such.” Race also mattered. Responding to the white ministers, Dr. Bond argued that the public health risk came from African American churches “where meetings from three to five hours on Sunday nights are common.” While this explanation satisfied white ministers, it elicited a public rebuke from local African American leaders. The ministers of four Black churches—led by Rev. Major W. Reddick of Bethesda Baptist Church—rejected Dr. Bond’s explanation as a “flagrant injustice to a large percentage of the church-going negroes of our city.” 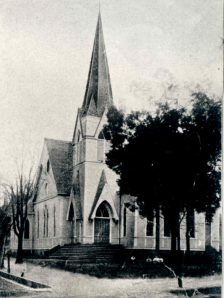 Rev. Brown’s most vocal criticism appeared shortly before the anonymous appeal to reopen schools. Referring to the pandemic as a “scourge of God,” Brown called on Christians—sick and well—to pray. “Those who are sick and suffering should pray,” Rev. Brown argued. “Those who are not should give God the praise, and at the same time pray for those who are.” The minister asserted that the Great War and the influenza pandemic were “both permitted by God because of the sins of humanity,” including faithlessness and greed. His message implied that hiding away in homes would not correct the causes of God’s scourge. Why, then, should churches remain closed?

The ministers, followed by the anonymous educator, put enough pressure on the local government that the city fully reopened in February 1919. Rev. Brown, alongside the ministers of First Baptist and First Methodist, argued before the health board that Americus was behind other cities in reopening. They also challenged the government’s right to regulate churches in the first place. “What right have the authorities,” one of the ministers asked, “to close the churches when

the constitution gives every man a right to worship God as he sees fit?” The newspaper’s headline, 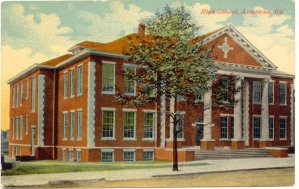 “Ministers Pry Flu Lid Loose,” made it clear who had reopened the city.

The pandemic faded but not forever. A weaker “fourth wave” hit the region later that year and some of the local victims were school-aged children. Yet it was the end of most public discourse in the local paper.